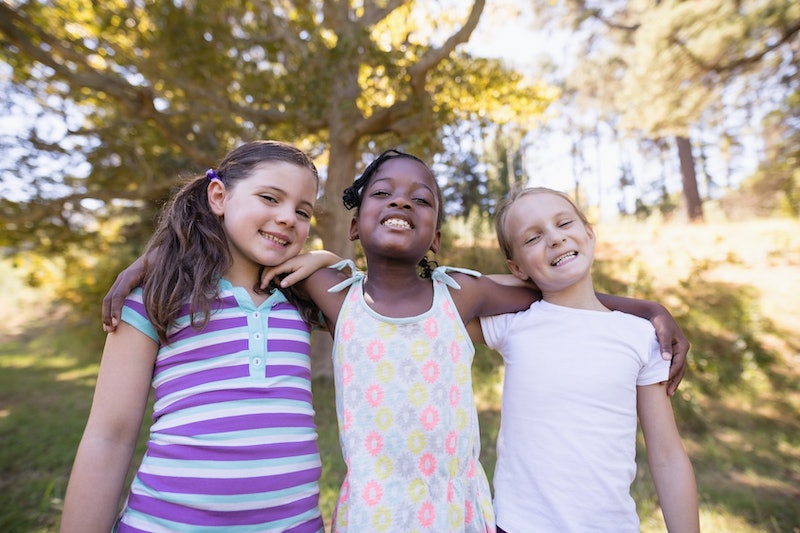 Back in the old days, men did woodshop while women did home ec. Men learned practical skills while women learned how to maintain a house. While these exact divisions don’t exist in classrooms today, still girls are rarely taught how to use a saw, weld metal, or wire a kitchen. Enter Rosie’s Girls, a three-week summer camp where girls entering grades 6-8 learn traditionally “masculine” skills like carpentry, welding, and fire-fighting. Cool!

Taking it’s name from Rosie the Riveter, the bicep-flexing symbol for women in the workforce during World War II, the camp aims to build the self-esteem of young girls and challenge the idea that certain domains are reserved for men. Girls wear construction hats, abseil down tall buildings, and get covered in paint. They also do silk screening, painting, and collage, and engage in physical activities like swimming and self-defense classes. The girls are taught to work as a team and support each other — a non-competitive approach that could be crucial for later life, helping to combat a Mean Girls mentality developing during high school, and even encouraging more female-to-female support in the workplace.

Crucially, the camp caters to girls at precisely the age when female self-esteem plummets. It is offered in eight locations across five states: California, New York, Ohio, Rhode Island, and Vermont.

Rosie’s Girls is not alone in its approach. Another camp for girls between 9 and 12, Camp H, also hands girls hammers. Camp H is a construction camp that focuses on integrating math and science into design, to encourage ongoing female participation in these two areas where women are drastically underrpresented, both in college majors and in the workforce. The camp encourages girls to design, build, and be bold, and presents the girls with strong female role models in the form of architects, engineers, and designers.

What does it mean to be a Rosie’s girl? “I think it means you’re more independent, you’re more brave, and you don’t give up,” one camp attendee told Today.