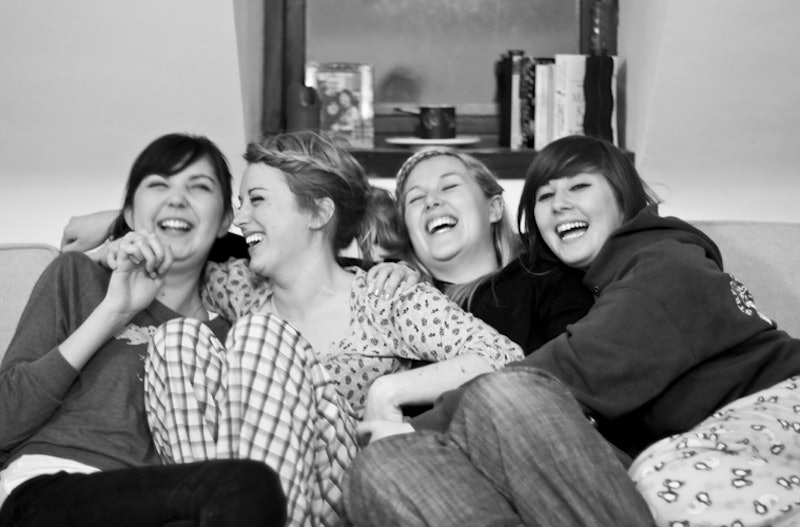 When we’re young, making friends is pretty much like the scene from Step Brothers where Will Ferrell asks John C. Reilly, “Did we just become best friends?” And Reilly says, “Yep!” Rarely does it take more than a single bonding experience — being the last two picked for volleyball again, hearing your teacher fart, or even living on the same dorm floor — to make a BFF. When we’re still in school, starting a friendship is a relatively painless, non-embarrassing process, even for those who can be terribly shy and awkward in social settings (hi).

But then, one day, you wake up in your late 20s/early 30s and realize, “Holy shit. I have no friends! And not the faintest clue how to make any!” At least, that's what happened to me.

Our life, like most new couples’, had pretty much morphed into a rom-com montage, save for a scene where we were trying on hats or splashing in a fountain. During our courtship, close friends of mine moved away or started dating people too. While I was certainly bummed to see my old crew slowly evaporate like a water ring on a coffee table, it didn’t affect me nearly as much as it would have had I not been falling shoulders-deep in love. I blindly didn’t care about much else, least of all stocking up on friends.

After graduating from college I moved to Los Angeles, where, not coincidentally, many of the people I had spent the last four years with transplanted themselves, as well. None of us had time to gorge on Jerry Springer marathons anymore, but L.A. still pretty much became College 2 for a large group of us. I rented a bungalow with two of my girlfriends from school, we went out often, and the list of people I could call in the case of an emergency was well-stocked.

Eventually, though, our robust group began to thin out. Life happened. People broke up, others moved “back East,” and some got new jobs and became "new" people. Before I knew it, I was renting an apartment with only one of the two girls I had lived with for the past three years, and my days of automatically having Friday and Saturday night plans were fewer and further between.

But before I had time to really take notice or get sad about things, I met the guy I would eventually marry.

We all know how this story goes. You start dating someone and you all but crawl up an orifice of theirs, letting friendships fall by the wayside. We were about romantic dinners, my then-boyfriend and I. We were about going to the movies, cooking potato chip-encrusted halibut together while listening to Frank Zappa, taking day-trips to places that had things like wineries and Zagat-rated restaurants.

Our life, like most new couples’, had pretty much morphed into a rom-com montage, save for a scene where we were trying on hats or splashing in a fountain. During our courtship, close friends of mine moved away or started dating people too. While I was certainly bummed to see my old crew slowly evaporate like a water ring on a coffee table, it didn’t affect me nearly as much as it would have had I not been falling shoulders-deep in love. I blindly didn’t care about much else, least of all stocking up on friends.

About a year into our relationship, when we realized that our wallets couldn’t support our steady diet of cute, French bistros and jaunts to Santa Barbara (and when we began longing for human contact outside of one another), my boyfriend and I discovered that neither one of us had many friends around anymore. Where the hell did everybody go? What happened? It was like we stepped out of our apartment and were transplanted into a friendless, post-apocalyptic war zone.

We decided to try to get out there again. We made an effort to make friends, but found that as adults, it was much harder than it used to be. It sucked, actually. See, when you’re part of a couple, there are numerous variables that need to fall into place in order for a friendship to work. For one, you’re dealing with four people’s schedules, instead of two; and four sets of people need to get on well in order for it to be worth anyone’s while. But by the grace of sweet baby Jesus, my husband’s good friend from college started dating someone — and she was awesome.

It only took hanging out with Lauren twice before she and I had inside jokes. We had things in common. Weird things. Neither of us ate dairy and we both liked our cookies frozen (weird, right?). Our significant others naturally got along — they’d been friends for years — so it couldn’t have worked out better. Before we knew it, we were hanging out weekly, taking trips, and going wedding dress shopping together (our wedding dates were only a few months apart).

To this day, it was the easiest, most natural friendship I’ve ever made in my adult life. And although it was technically a relationship that was born out of convenience, that wasn’t the “thing” at all. We clicked; we were meant to be friends. Whenever I hear the C.S. Lewis quote, "Friendship is born at that moment when one man says to another: "What! You too? I thought that no one but myself…" I think of her.

But when my husband and I wound up moving to New York, we were back at square one. Maybe even less than square one. I had two friends from high school who were within a 45-minute drive, but neither were married, and both were incredibly busy, so we didn’t really see each other much more than when I lived 3,000 miles away.

My husband and I tried to make friends — god knows we talked about wanting to make friends — but it was just so damn hard. I met a group of awesome girls at my job, and at work, we got along famously, even hung out outside of the office a few times, but they all had been living in New York for years and were already settled in terms of their social circles. They all already had their Laurens.

About a year after living on the East coast, my husband and I decided to take the next natural step in our relationship — we had a baby. And let me tell you: Kids are fantastic bait for making friends. You go to the park, you make friends. You sign up for a class, you make friends. You sign up for a site like MeetUp and find moms in your area who are itching to get out of the house and have their kid mingle with other kids too, you make friends. You don’t know it when you’re childless, but once you give birth, you’re immediately inducted into a secret society, where fellow parents everywhere will chat you up at a moment’s notice. They actually give you a card at the hospital when you’re discharged with a knowing nod that says, “See you at the meeting.”

It’s a proximity/oh-we-have-this-totally-not-random-thing-in-common kind of deal. All it takes is for your kids to gravitate toward one another at the public pool, and, boom, it’s on. It’s great and it’s certainly convenient, but there’s one, small caveat: You’re older, pickier, and lightyears more tired.

My cousin once said to me of her fellow mom friends, “These aren’t people I’ll know forever, they’re just people I hang out with.” It sounded a little harsh at the time, but now that I have a kid of my own, I get what she means. Of course you meet people you really, genuinely connect with as a parent, but by and large, the majority of your new friends are not people you’d ask for a ride to the airport. (And as for the people you genuinely connect with? Have fun making plans with them. Trying to arrange a get-together between two sets of parents, particularly if they work, is akin to trying to crack the Da Vinci code.)

Four years after longing for friends like the ones we had in Los Angeles, my husband and I are finally at the point where we’ve accepted our situation. We have a pretty full social calendar, and our daughter seems to be having fun, which, ultimately, is the most important thing. We may not have a long list of people to call for rides to the airport, but we’re good. We used to constantly talk about living near our friends from Los Angeles again, wondering if it would ever happen, but odds are it won’t — and odds are we won't meet anyone like them anytime soon.

And even if were were still around our old college friends, who's to say we'd even still relate to them? We finally grew up, I guess. And like many things regarding getting older, it’s both sad and liberating all at once.

That said, if you know of any cool toddler parents in the Tri-State area who are looking for friends, email me.

More like this
21 Galentine’s Day Memes To Celebrate Your Best Friends
By Meghan Bassett and Mia Mercado
I Spent 2 Years Trying TikTok’s Dating Advice
By Kailynn Johnson
5 Signs You Have A Toxic Relationship With Yourself
By Lexi Inks
These 3 Signs Are The Master Chefs Of The Zodiac
By Kristine Fellizar
Get Even More From Bustle — Sign Up For The Newsletter
From hair trends to relationship advice, our daily newsletter has everything you need to sound like a person who’s on TikTok, even if you aren’t.