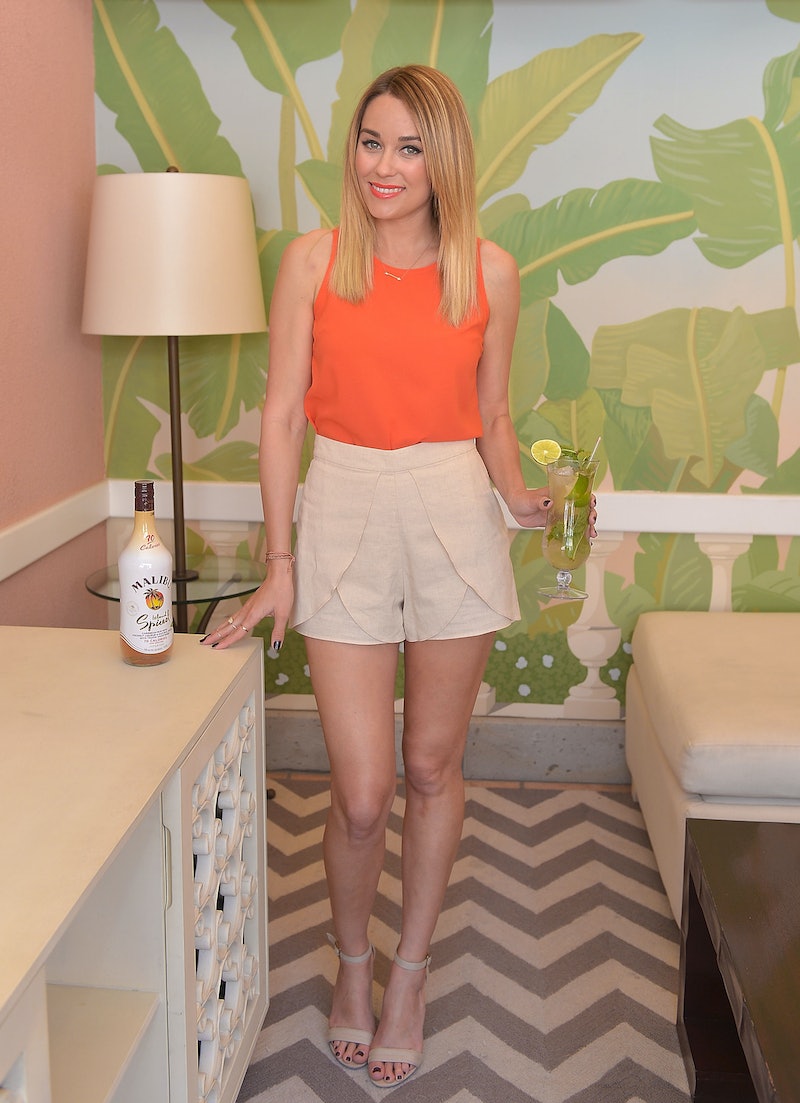 Ut oh. Is there a beauty battle brewing between the ever-busy Lauren Conrad and Allure, the glossy mag which repeatedly puts the onetime reality star, designer, and author on its cover, the most recent of which was April 2014 and saw LC rocking uncharacteristically smoky eyes and somewhat bronzy-dewy skin? Perhaps. The mag published an infographic highlighting four different styles, typecasting LC as a basic bitch, essentially.

Well, that's how Heidi Montag's nemesis saw it. Conrad tweeted about the perceived diss, adding the "haha" to maybe keep her tweet slightly less confrontational or so she can later say that she saw the humor in the item and isn't as mad as the media made her out to be.

Here's the stats: Conrad was typified as the basic bitch whose hallmarks are smelling like vanilla cupcake body milk, wearing Essie's popular and soft Ballet Slippers lacquer on her digits, pulling on skinny jeans, and rocking a blowout or sausage curls (!!!) in her hair. This was positioned against the Street Stylist, the Bohemian Hippie, and another style archetype we can't quite make out since it's blurry.

Honestly, though, the other style stereotypes are of little consequence, since LC seemed pissed and because Allure's categorization seemed a bit small-minded.

The larger argument here is basic bitch vs. classic.

Conrad's style is very light, airy, and Cali girl. It's not dark, edgy, or unpredictable...

...athough I have to admit her latest Allure cover was her most memorable, due to the sooty eyeliner, coats of curled mascara, and back-combed, Brigitte Bardot coif. I must confess that I was surprised that she still commands covers at this point, but she moves copies, so she is doing something right. It was a nice change of pace for her, too.

But the all-American, sunny, breezy Cali girl look is what works best for her. She is all about wardrobe classics that withstand and outlast trends, that can be worn multiple seasons and years, and that which are staples. Granted, LC doesn't rough it up by adding a McQueen skull scarf nor does she pile on the bracelets, but that's not her thing. She's a style star for Everygirls.

Her IG is full of whites and brights, from her sheets to her selfies to her décor posts. It reads girly, femme, and modern Grace Kelly classic, not basic bitch to me.

Here's another. It's so California and fresh. Could those waves be any more flawless?

Still, it's much more fun and "Oh no she didn't!" to consider Conrad a basic bitch than it is to say that she sticks to the classics and that she doesn't often deviate from what's expected or from her sigs.

But remember this. There is a reason that Gap and American Apparel exist and that is to supply us with the basic, layerable pieces that we need for our ensembles. Conrad's style is indicative of that fashion fact. Plus, we're all a little bit basic anyways, so who says it's a bad thing?

Case in point: Conrad's Paper Crown and Kohl's wares are a bit too girly and flowery for my taste, but I have no aversion to, say, her black leggings. Who doesn't need or want a good pair of black leggings, which can be dressed up or down accordingly?

Also, I tend to wear Essie Mademoiselle, a faint pink, for my mani simply because it hides the chips, which look dirty, messy, and not neat on dark painted fingernails; if the polishes were chip-free, I'd only wear Black Satin by Chanel for both my mani and my pedi. I go light on my hands since it looks cleaner. End of story.

I also love anything that smells like vanilla, grapefruit, or soap.

Does these style hallmarks make me a basic bitch, Allure? No. I simply mix classics with edgier, more fashion-forward pieces and don't break the bank in the process.

In fact, I dress by this credo: If one item is Balenciaga, like my bag, and another is House of Harlow or Elizabeth and James, like my sunnies, then the rest can be Old Navy, American Eagle Outfitters, and a maj vintage find or an "Oh hell yes!" consignment score.

So, in her defense, LC might be a basic bitch to some, but she's really just the New Classic, to borrow an album title from Iggy Azalea.

In honor of LC's classic-ness, listen to MKTO's "Classic" on repeat all day. Totally off topic, but this song should be the biggest hit of the summer of 2014. #Truth.