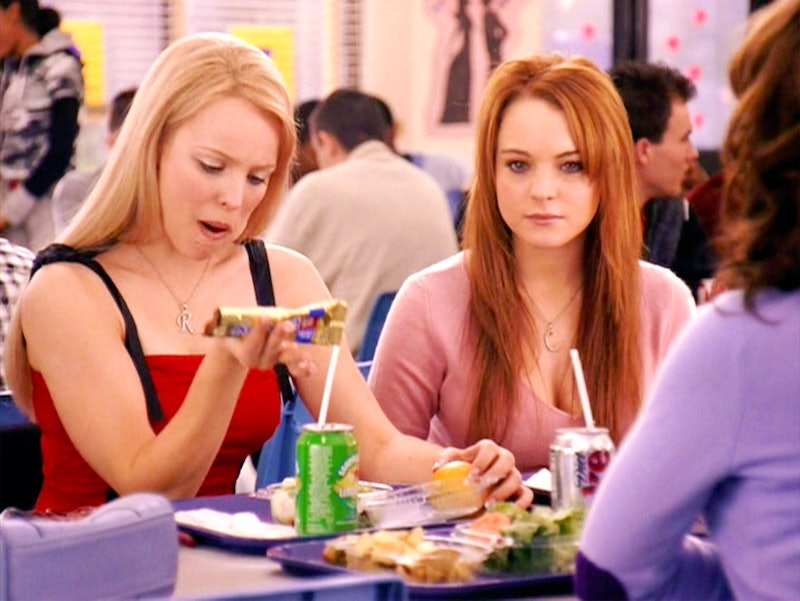 If you're a Mean Girls super-fan, you probably already know Lindsay Lohan was originally supposed to play Regina George in the movie. Director Mark Waters spilled Mean Girls secrets on its 10th anniversary a few months ago and shared how Lohan loved the idea of being the villain. But for various reasons, they went with Rachel McAdams instead. Turns out McAdams actually wanted to be Cady Heron, but was "too old." If those roles had been reversed, Mean Girls just wouldn't be the same. While we know which characters they played in the movie, what about their roles in real life? Apparently Lohan was more of a Regina than you'd think! In her cover interview for Allure's August issue, Rachel McAdams admits she was intimidated by Lindsay Lohan on set.

McAdams told the magazine, "If anything, I was in awe of her talent. I looked at her as this experienced actor, and she had great comedic timing, so natural." That makes sense, since Lohan had already filmed the greatest movie of all time. (Yup, The Parent Trap!)

So taking this new information, I've decided to reimagine Mean Girls. What would the movie have been like if queen bee Regina George was the one intimidated by Cady Heron? Let's pretend the new girl was the mean girl.

It was an ordinary day at North Shore High School until a new student arrived from Africa.

Her name was Cady Heron and within hours of her arrival, she was ruling the school.

Regina offered a genuine compliment and asked if they could be friends.

But this is how Cady responded:

When Regina asked why not, Cady whipped out a British accent and this insult.

Confused, this is how Regina responded.

Although Cady wanted to say "yes," she remembered what her mother told her.

So instead, she decided to let Regina sit at her lunch table. It was a pity invite.

But Regina became clingy and obsessed with Cady.

Cady usually laughed about it. Because when it came to jokes about Regina...

Then one day, Regina did the unthinkable: She wore sweatpants. In public.

It got so bad that Regina had no choice but to transfer schools.

Aww, poor Regina! Luckily, that's not how the real movie ended. And Rachel, if you're ever intimidated by another actress, just remember Kevin G's advice: