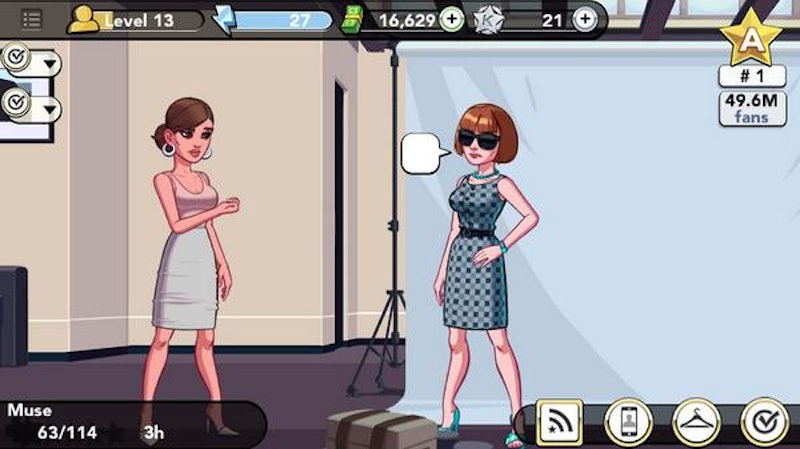 Want to know the best way to get revenge? Make a video game and put your enemy in it and make them look mean. What? That doesn't sound super easy? Well, that seems like the route Kim Kardashian took when she put an Anna Wintour lookalike in Kim Kardashian: Hollywood. Elizabeth Korkov is a major name in the game's fashion industry and she happens to look exactly like Vogue's editor-in-chief Anna Wintour. Both women sport shoulder-length red/blonde hair and dark sunglasses. Even their fashion style is similar. Oh, and Elizabeth Korkov is every bit as mean as Wintour is rumored to be.

But why the dig at Vogue's leading lady? Most likely it's because Kim Kardashian felt slighted when Wintour opted out of attending her fancy, Italian wedding. Reportedly, Wintour skipped out because she had better things to do. Also known as a "longstanding family commitment." How dare she.

Apparently, Kim didn't take that rejection very well. So now, Anna Wintour's on Kim's hit-list even though Wintour had previously had Kim's back. When everyone was making fun of Kim Kardashian and Kanye West's of Vogue cover, Wintour defended them saying it was "charming and touching."

But still, Wintour ended up being defamed in Kim's digital world.

Instead of defending Wintour the way she defended Kim, her game sticks to the stereotype that Wintour is an Ice Queen.

Seriously, does she not look exactly like Anna Wintour?

But perhaps worse than reinforcing her Ice Queen persona, Kardashian's game relegates Wintour to the B-List.

Wintour may be just a magazine editor, but she knows everyone and everyone knows her. That alone should get her an A-list slot. If Kim did this to Wintour all because she chose family over a celebrity wedding, I wonder what Kim will do to Brody Jenner for skipping out? Maybe she'll turn his likeness into one of the douche-y guys your avatar can meet in bars.

And as for Kim, I hope the post-wedding Wintour snub was worth it, because she's probably never going to be in Vogue again.