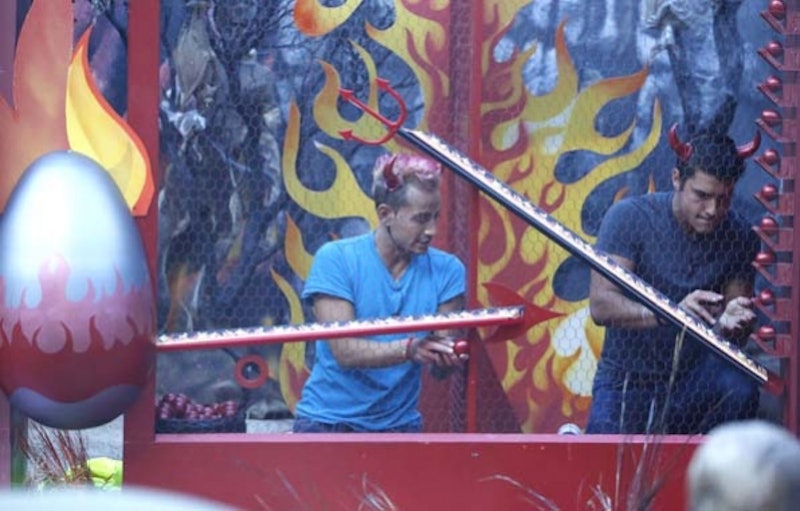 This week's Big Brother had the potential to be game changing. With such big players in the house, like Derrick, Caleb, and Frankie, this summer has been pretty tame regarding backstabbing and interesting game play. This week's start was no exception after Frankie and Cody won Head of Households and nominated Amber and Jocasta, and Brittany and Victoria, respectively. Seriously guys? You couldn't be anymore obvious in nominating ALL WOMEN?

But girl power prevailed when Victoria beat out Cody, Caleb, and Zach (along with her co-nominee Brittany, and Nicole) for the Power of Veto. Obviously, Victoria was going to take herself off of the block, so the house was sent into a mini-tailspin with Cody having to decide who should go up as a nomination. That's where our main man Donny — who seems to always be used as a nomination filler — comes in to play, coming up with a genius plan to evict the houses creepiest houseguest, Caleb. Cody, who has been flirting on and off with Caleb's one true love Amber, was all ears, as Cody doesn't want to have Caleb coming after him for befriending Amber (not unlike the village people coming after Beast with pitchforks in Beauty and the Beast, which sounds crazy, but Caleb would totally do it).

Before the Power of Veto ceremony:

Donny was the most common name that was being thrown around in filling the empty chopping block seat, of course. The only reason people keep nominating him is because they know that if they apologize to him he will forgive them, because he is JUST TOO NICE. Ugh. Anyway, Donny went up to Cody before the Veto ceremony and started talking game:

Donny suggested that Caleb fills Victoria's spot for Thursday's live eviction. Caleb, beyond being a love obsessed houseguest, has proven that he will do anything to make sure he and Amber stay in this game, together. Cody, tells Donny that he isn't afraid of Caleb. He basically decided that Caleb had to go.

This causes chaos to ensue in the Big Brother house. Frankie, who loves to keep the peace in the house, started to freak out at the potential of Cody putting Caleb up on the block. But with Cody locked in Diary Room, Frankie couldn't really do much.

Because what Donny had just done was come up with a genius plan to pit the house against each other.

During the Power of Veto ceremony:

During the POV ceremony, as planned, Victoria removes herself from the block. Once the feeds back come on, it is revealed that Cody decided against his previous plan and nominated Donny (why!?) instead of Caleb as the replacement nominee. This was a much safer move for Cody, but safe isn't what is going to win you the Big Brother game.

After the Power of Veto ceremony:

Caleb, who might be completely oblivious to the almost nomination he just had, is sitting pretty for the rest of the week, while Donny is left questioning what happened to the plan he and Cody had discussed prior to the ceremony.

Here's what happened Donny, Frankie got to Cody minutes before the ceremony.

Cody, who is upset that he didn't make the game move he said he would, is praised by yes-man Frankie.

And then Frankie leaves us with this inspirational Big Brother quote:

So now that the block consists of Donny and Brittany, it looks like the house is planning on sticking to their original plan and evicting Brittany, even though she "deserves being in the house more than anyone."