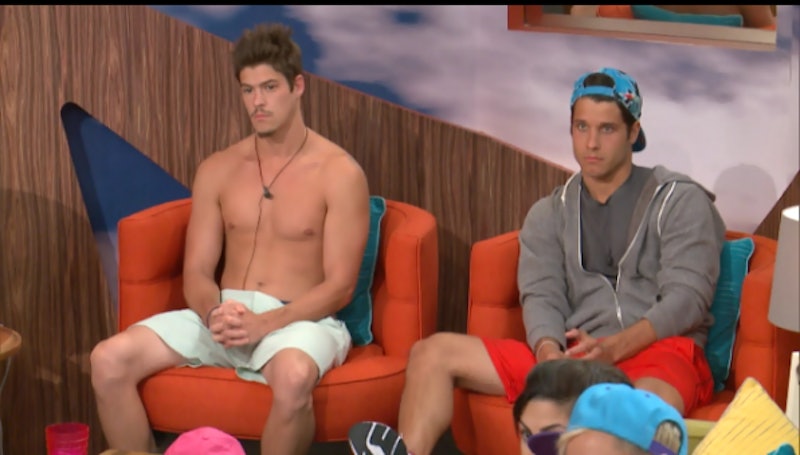 It feels like just yesterday that Devin Shepherd walked out the doors of the Big Brother house. Oh, right! That's because it was just yesterday. Now that Devin is long gone, the game is likely to take a turn for the better. Starting this week, people will have to get blood on their hands by nominating other houseguests, which will only make for great TV for us. During last night's episode, we watched as houseguests slowly fought for the title of Heads of Household — man it was so slow moving — and once the episode ended, two new HOHs were crowned: everyone's favorite YouTube star, Frankie Grande and everyone's favorite underwear model, Cody Calafiore.

So who did these two former bomb-squad members chose to nominate for eviction? According to Big Brother Leak, Cody nominated Victoria and Brittany and Frankie nominated Jocasta and Amber. Seems like it is guys versus girls this week, but there seems to be some big game moves behind each of their nominations. Brittany, despite what is seen in the episodes CBS has been airing, has been playing a very smart and strategic game so far, and that game hasn't gone unnoticed by the other houseguests.

Amber, who has been talked about a lot recently because of Caleb's insisting that they are a couple, is also a smart nomination because breaking up Caleb and Amber will allow the other houseguests to not worry about that final two deal (although it seemed that final two deal was only one-sided). And even though Frankie was the one that nominated Amber, she wasn't letting Cody, her masseuse and close friend in the house, off the hook that easily.

Once Battle of the Block is played, it will be easier to see what the intentions are this week, but according to a conversation Cody and Caleb had in HOH room, things might not be as they seem.