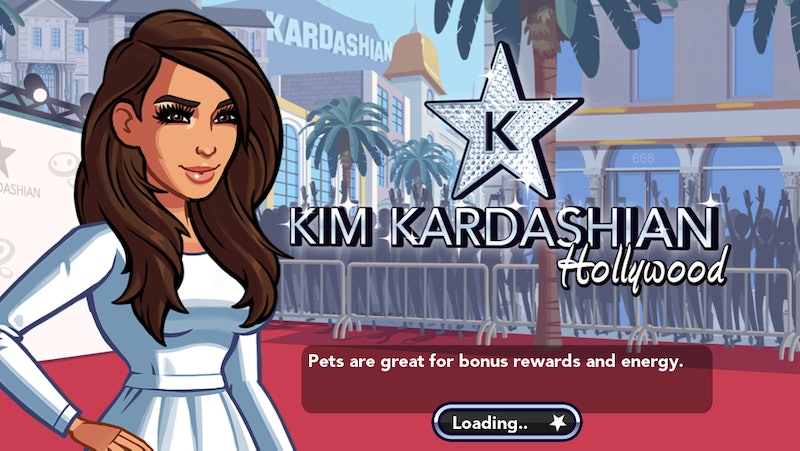 I'll be the first to admit it, the Kim Kardashian: Hollywood iPhone game is addicting. It's not even a guilty pleasure for me anymore. It's surpassed that. I now proudly play the game no matter where I am, or who might notice. I've learned a lot in my climb to the A-list (oh yeah, you're looking at #160), from which of Simon's offers to take to what outfits earn you the most fans. But there's also one real life thing the game has taught me, and it's that Kim Kardashian thinks pretty highly of herself.

I can't be the only person who noticed that game-Kim loves two things: forcing people to compliment her and being the most generous person in history. The game's entire premise depends on Kim taking a regular old salesperson under her wing and helping them reach their celebrity potential. You don't even have to be very far into the game to notice it. Most of Kim's cockiest moments occur within the first few levels and thanks to the game's inexplicably addicting qualities, you probably got through all of them in one sitting.

So before you brush off Kim Kardashian: Hollywood as a mind-numbing activity without any real-world significance, know that it actually gives players a look into the mind of one of the world's biggest celebrities — and according to her, one of the nicest. Here are just some of the moments in Kim Kardashian's game that give fans a peek at her extreme confidence.

Don't we all dream of a day when meeting someone for the first time prompts them to excitedly yell your name? And note that Kim doesn't want him to see her "like THIS," when she already looks way better than game-me. Rude.

Yes, the game makes you give Kim the dress for free. So she's getting $200 million and a free dress from the obviously high-end So Chic out of this game.

Not only does Kim surprise you by setting up your very first photo shoot (of hundreds), but she also stands by your side offering moral support the whole time. So selfless.

Because in Kim's world, a reality show is the highest thing one can achieve in life.

That is the only response option. It is literally impossible to do anything but compliment Kim's house in this moment — to which she'll respond with a not-quite-humble brag.

Do you know what else Kim is great at, besides photo shoots, networking, shopping, helping random people in stores, and providing moral support? Matchmaking.

From now on whenever you're late to an appointment or bail on your friends, just mention Kim. She's always a valid excuse.

You see that? Even though the game is called Kim Kardashian: Hollywood, and Hollywood is a place you can visit, the Hollywood sign has been replaced with a Kardashian sign. Maybe Kim will dedicate her profits from this game to making that a reality.