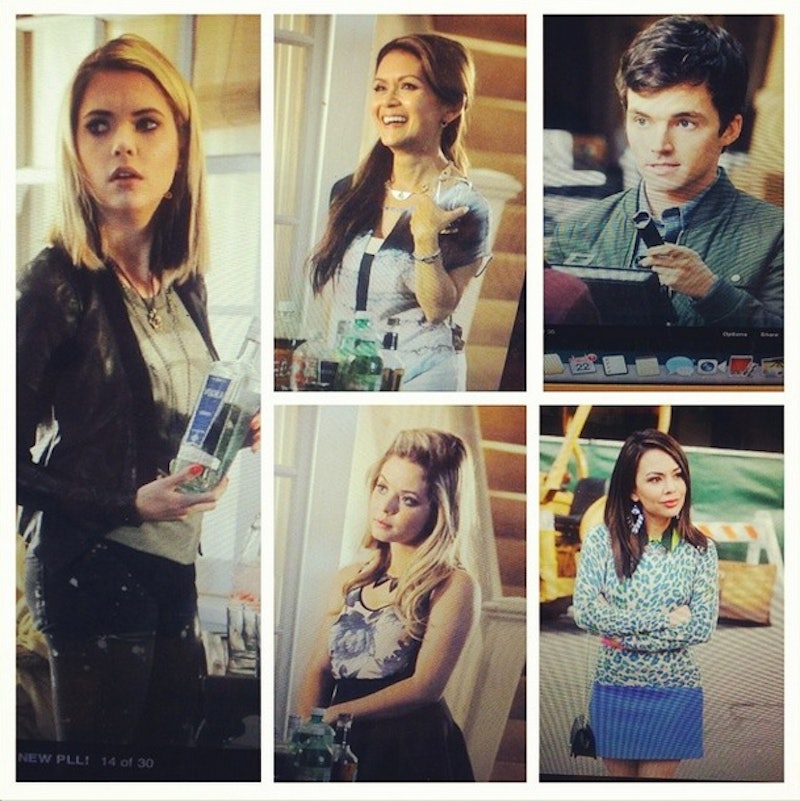 Last night's episode — the cleverly titled "The Silence of E. Lamb" — featured more dead rats (eurgh), more Drunk Hanna (delightful, as always! Though should we be worried? I'm getting shades of Season 3, post-Maya, Emily), more seriously creepy artwork of Mrs. DiLaurentis (*shudders*), more surveillance (Oh, Ezra), and of course, a divisive text from 'A' (man, if looks could kill, Hanna would be dead, because Aria's death stare was so intense it was almost tangible). So, all in all, a normal week in Rosewood, eh?

Early on, we were treated to quite the tableau of outfits: the girls had one of their signature bathroom pow-wows (and what secret bathroom rendezvouz is complete without someone secretly listening in from the stalls? This time, it was sneaky swim team member Sydney/Jenna's possible secret twin that was doing the snooping). Let's review:

Ali seemed to be sticking to her blazered queen bee duds — this time with a cowl scarf, artfully draped to hide her post-'A'-strangulation bruises. Ouch. To be fair though, the outfit was much cuter sans blazer, which she thankfully removed for dinner at the Fields's. It turns out her V-neck floral tank, circle skirt, and statement necklace were actually pretty cute.

Aria brought the color to the bathroom meeting with a pink tie dye shirt with black accents. Later in the episode, we also got to see her Radley volunteering outfit, which was also surprisingly cute — she wore a striped tank top paired with a olive green army jacket, skinny jeans, and a leopard print purse... when she wasn't wearing the unfortunate volunteer smock, that is.

Hanna was still rocking her punked-up look with an olive green graphic T, black skinnies, and necklaces galore. This week, she committed to her new look even further by adding a vampy burgundy lipstick (as opposed to her customary pink lip gloss).

Did I mention that Drunk Hanna is kind of awesome? (I did).

Emily looked as athletic as ever in a blazer artfully layered with a heathered sweatshirt. For dinner, she changed into an adorable little camo sleeveless button down.

Spencer looked absolutely fabulous in a white silk Oxford shirt with a graphic black stripe across the front, tucked into a textured skirt over black thigh highs. One of her best looks of the season, IMHO.

Whew. That is a lot of clothes. But who takes home top prize?

Armed with her blue, green, and gray neon-accented leopard print sweater, (which was paired with a lovely cobalt blue mini and a hot pink patent leather skinny belt for a pop of color), Mona was poised for victory. It was kind of like Lisa Frank stationary personified, in the best way possible.

Runner up: Pam Fields, who killed it in a gorgeous blue gray silk blouse!