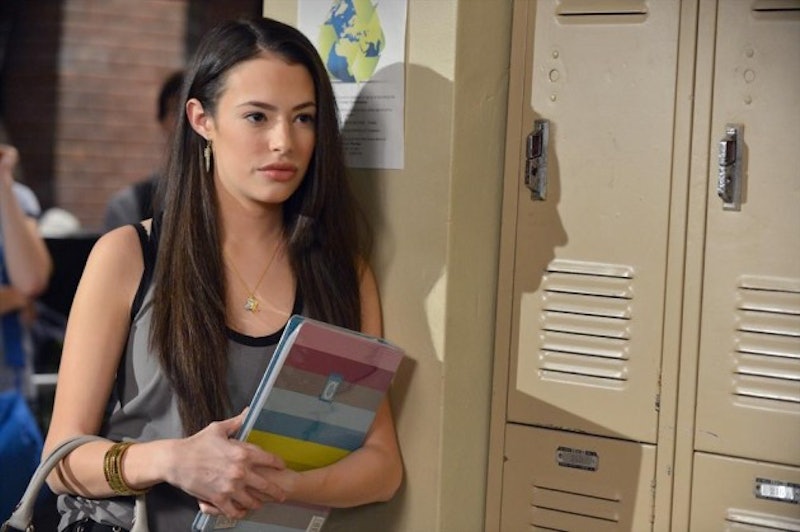 Bravo, PLL — you fooled me once again. Though I'm easily one of the biggest Pretty Little Liars fans that I know and spend entirely too much time theorizing on the identity of A, I didn't see this new twist coming. The 100th episode of Pretty Little Liars , titled "Miss Me x 100," had a number of jaw-dropping moments, and while I'm still reeling over the whole "Radley-patient-in-Ali's-grave" thing, I was also pretty shocked at another one of the episode's reveals: Emily's new friend Sydney Driscoll is in cahoots with Jenna Marshall!

Looking back, I really shouldn't have been too surprised to learn that Sydney is anything but innocent. For one thing, she's played by Chloe Bridges, the girl who played the ultimate '80s diva Donna LaDonna on The Carrie Diaries. Bridges has way too much sass to waste it by playing the nice-swimmer-next-door — good for PLL for recognizing it. Then there's the fact that nearly every allegedly "good" new character on Pretty Little Liars is revealed to be at least kinda evil. PLL fans all thought (well, a lot of us thought) that Ezra was a completely innocent character (you know, aside from the whole dating-your-student-thing) and then was revealed to be an even bigger sketchball than we could have ever imagined. And it does seem like Emily attracts the crazies — her "friend" Nate went all psycho-murderer on her.

Now that we know that Sydney is anything but innocent, we need to find out who she actually is. Sure, she's definitely bad news, but how does she fit into the whole PLL plot? Here are some theories on the real identity of Sydney.

Tammin Sursok (the actress who portrays Jenna) said it herself that someone on PLL had a secret twin. Could she have been referring to her very own character? Sydney and Jenna looked nearly identical when they stepped out of that car together — with their dark hair and their sunglasses on, they could easily pass for the other. Was that a hint that these two could be related?

Sydney seems slightly crazy-town (just look at the way her switched flipped from nice girl to bonafide villain!) — could Sydney have been locked away in Radley all these years? Jenna's mother could have kept Sydney a secret from her new step-family, which meant that no one would be the wiser that Jenna had a secret twin in Rosewood to do her bidding. Super creepy.

She's Another One Of Ali's Bullying Victims

Ali and Sydney don't seem to know one another, but that doesn't mean that Sydney doesn't remember Ali and is hiding their relationship as part of a greater plan. Ali was mean to a lot of people, and while most of her cruelty was targeted at other Rosewood teens, Ali could have been just as awful to people she knew outside of town. Ali often summered in Cape May — what if she bullied Sydney during those summers? Sydney could have come to Rosewood to seek revenge on her former tormenter, knowing that Ali wouldn't remember a changed Sydney years later.

She Was Shana's Friend

Sydney didn't come to Rosewood until after Shana's accidental death — pretty suspicious, don't you think? Sydney could have been a friend of Shana's, possibly one working with her to take down Ali and the girls. When she found out that Shana was killed, she went back to Rosewood to finish what Shana started — and teamed up with Mona and Jenna in the process.

Lucas made a big deal about inviting Hanna to his party for his Philadelphia-based girlfriend, only to have the girl not show up. What if Lucas isn't dating some girl in Philadelphia, but is really dating Sydney? Sydney's loyalty to Lucas would mean that she'd have an easy tie to Mona and Jenna, and would be the reason she'd want to get intel on Paige and Emily.

Whoever Sydney really is, the girl is bad news bears. Watch out, Em!