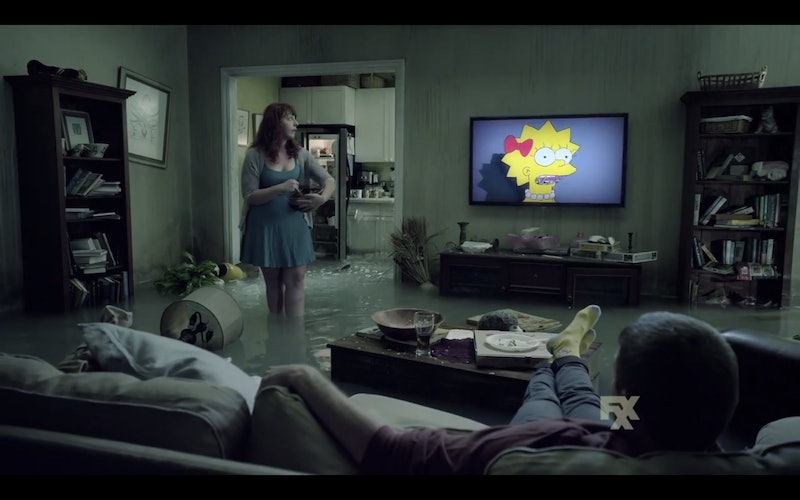 I have watched every episode of the first twelve seasons of The Simpsons (yes, I am one of those people that refuses to acknowledge the past decade of the show) multiple times. So much so that not only are reciting Simpsons quotes a part of my day-to-day life ("Not Lenny!"), but I have attended, on more than one occasion, a Simpsons trivia night in Brooklyn. All together now: Nerrrrrrrrrrd. So even though The Simpsons has been part of my life for, well, most of my life, I still can't wait to re-watch all of my favorite episodes when FXX airs every episode ever during a marathon in September, and then again in October when the episodes all become available online. That's why the network's new ad for the upcoming marathon is scarily spot-on.

Not only will this marathon likely be watched by fans who know these episodes inside and out, but they'll be the ones who will basically hole up and do nothing else but re-watch them. "We're all gonna die," the tagline for the commercial warns as we see society crumble around us ("Oh my god, the PTA has disbanded!") because we can't stop watching The Simpsons. Okay, maybe we won't all die, but we'll definitely all look like Mr. Burns when he went all Howard Hughes shut-in in the casino episode. See for yourself:

But that's only because The Simpsons, like any great television comedy, is infinitely rewatchable. No matter how dated their references may get over time, certain shows not only get funnier with age, but they hold an even closer place in your heart. Sure, the nostalgia factor certainly factors in when it comes to rewatchable shows, but that's not what makes them stand the test of time. Certain episodes of The Simpsons are as funny, sharp, heartfelt, and cromulent as they were twenty years ago. The mark of a great, lasting TV comedy is when you've seen it a million times, but it can still make you laugh just as hard now, if not more so.

Here are nine other comedies that are just as rewatchable as The Simpsons:

If there's a comedy that can rival The Simpsons in regards to how much it changed the American lexicon, it's Seinfeld. Everyone has a favorite Seinfeld episode or line to recite, and heyyyyyy buddy, you better believe that when one of those comes on in syndication, you're watching it. Seinfeld may look outdated now, but it's just as subversive and funny as it was in the 90's and it only makes you appreciate it that much more. Seinfeld is so ingrained in our lives (can you ever look at a box of Junior Mints without thinking of the show?) that even if we don't watch it for some stretches of time, it's always there.

Friends, like Seinfeld, was insanely popular when it was on. And the same people that loved the show then, love it just as much now, if not more so. Friends hits all the rewatchability marks, including quotability ("Pivot!"), the fact that every fan has multiple favorite episodes, and that the humor still holds up. Friends is a show you can put on every single night for the rest of your life, but that you still make sure you go out of your way to watch at Thanksgiving. They had the best Thanksgiving episodes, after all.

Golden Girls is an instant mood elevator, so when an episode is on, you're most certainly watching it. Like other nostalgia-heavy sitcoms like The Cosby Show, Full House, The Fresh Prince of Bel-Air, or even Saved by the Bell, Golden Girls has a way of instantly transporting you back to the time when you first watched it. And, much like with Friends, no matter how many times you watch the series, you instinctively sing the theme song.

Granted, this is a show that's still on the air, so whatever happens in its final season could change its rewatachability in the future (ahem, How I Met Your Mother), but for now it most certainly applies. Parks and Rec is one of those shows that you'll not only always flip to when it's on in syndication, but thanks to the beauty of streaming, when you're in the mood to watch classics like "Flu Season" or "Pawnee Rangers" you can...and will.

This could go for the British version or the American version, really. That said, the American version's rewatchability ends as soon as Michael Scott exits and begins again when he comes back for the series finale. (It's kind of like with Roseanne, another very rewatchable show. As soon as you get to the eps when Dan has his heart attack, you know your Roseanne marathon is over.) But anything between Season 2 and Season 7 is a show you can watch in the break room of your own dreary office or from the comfort of your home pretty much forever. Everyone has a favorite Office character and definitely a favorite Office episode they'll watch whenever its on.

Season 4 aside (seriously, is anyone going to watch those again?) Arrested Development is a show you'll revisit at least once a year, especially if you've got a hankering for frozen bananas and truly brilliant, warped comedy.

30 Rock had us lizzing when it was on the air, and it will have us lizzing in syndication until the end of time. The best thing about rewatching 30 Rock is not only having the brilliant comedy and memorable characters still be a part of your everyday life (Liz Lemon is you then, now, and forever), but now you'll probably catch some of the jokes you laughed too hard over the first time around.

You may roll your eyes at some of the things Carrie does (and wears) now that you're older and wiser, but if Sex and the City is on cable syndication, you're kidding yourself if you think you're going to change the channel. You're especially going to watch if it's any of the Aidan episodes or that truly excellent series finale. Besides, rewatching the iconic SATC can sort of make you forget all about the dreadful movies that followed.

Yeah, there's only one season to rewatch, but those perfect 18 episodes of television are worth revisiting time and time again. The show not only gets richer when you watch it as an adult, but it somehow gets even funnier. Plus, by watching Freaks and Geeks again and again (thank you, Netflix) you keep its underdog spirit alive.