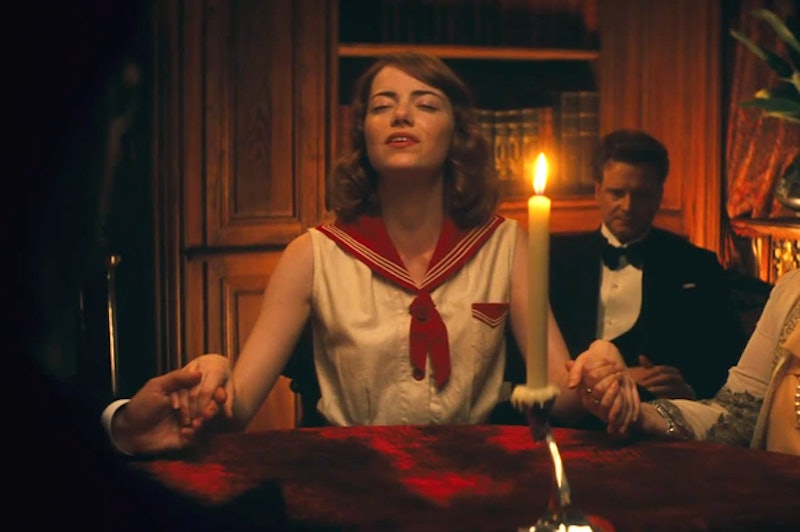 It's not every day that an actress has the same set of skills that the character she portrays has, but then again, Emma Stone isn't just any regular actress: she's a psychic. Stone sat down with MTV to promote her new film, Magic in the Moonlight, in which she plays a psychic medium alongside Colin Firth — side note: Stone is seriously obsessed with Firth — and revealed that she, too, can tell the future. (Professor Trelawney's long-lost daughter, anyone?).

Taking a page right out of Kristen Wiig and Fred Armisen's Garth and Kat bit on Saturday Night Live, Stone mimicked her interviewer on a nano-second delay in an attempt to prove that she knows what other people are thinking. (Basically, she uses her comedic genius and charming personality — don't those count as superpowers? — to make us love her even more.)

So what exactly does Stone see for our bright future? Well, for one thing, there's going to be a heck of a lot of Spam. That's right — the actress has a supernatural feeling that the canned mystery food is going to be making its way back into our lives. Also, according to the actress-turned-fortune-teller, the next biggest dance craze to sweep the nation will be none other than "The Louie," which will of course be based off of Louie C.K. Duh.

Everyone get their shrugging shoulders ready for "The Louie." We're sure it will be great.