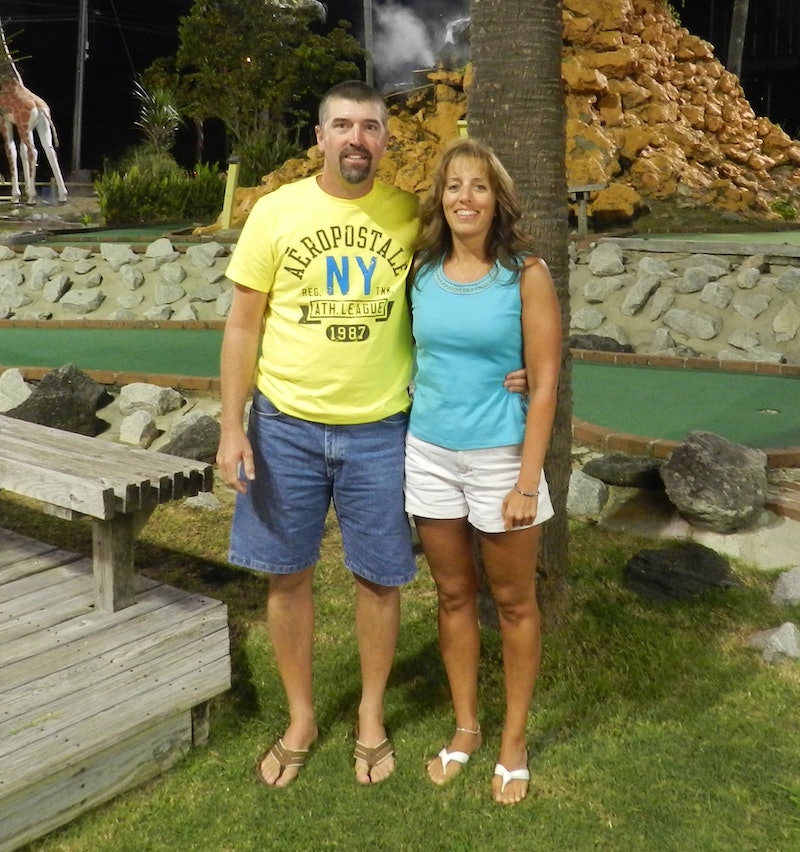 It's no question that on this season of Big Brother , Donny Thompson is loved by most of his fellow houseguests and pretty much all of America. His sweet Southern accent, voluminous beard, and way with words — in addition to his selflessness in helping an ailing Jocasta Odom and taking her off the block with his Power of Veto win — have cemented Donny as a fan favorite and primed him to be in great standing to win this competition (or at least America's Favorite Player). But as much as everyone loves Donny, there's one woman back in his home state of North Carolina that has his heart: his girlfriend, Kristine Bartley.

"Of course I was a little anxious and nervous at first not knowing how he'd be portrayed," says Kristine in a phone interview with Bustle. "Pretty much what you see on the show is what Donny is in person."

Kristine, who appeared on last Thursday night's episode of Big Brother when Jeff Schroeder visited Donny's loved ones, has been dating Donny for about two years. The two both work in the facilities management department for Cabarrus County Schools in Concord, North Carolina. Kristine is an administrative assistant and Donny, as we all know from watching Big Brother, is a groundskeeper for the schools in the district, not an ex-military-professor-actor as the houseguests have suspected this season. "It's funny to hear people speculate," Kristine said. "He's never done anything that they're guessing."

Kristine and Donny first met as coworkers, and he was actually one of the last people she got to know out of the approximately 60 people in the department. About two years ago, the department had obtained tickets to a NASCAR race at Charlotte Motor Speedway, and Kristine phoned employees to see if they wanted to attend the event. At first, Donny declined the tickets, but after some prompting from a coworker, Donny asked Kristine if she wanted to attend the race with him, which ended up being their first date. "We just hit it off," Kristine says.

Since then, Kristine and Donny do what most normal couples do. They go swimming, play mini-golf and cornhole, and head to the beach in the summer. They also love animals, so they visit the nature center or zoo together. Kristine said she's more active than Donny (she was on her way to the gym as we spoke), but recently, Donny has joined her at the gym, both to spend time with his girlfriend and "be ready and in shape" for Big Brother.

Donny was already a Big Brother superfan going into the game, but Kristine said she's not as into reality TV as Donny, although she has begun watching Big Brother since they started dating. However, it was Kristine who encouraged Donny to try out for the show. "I was the one that talked him into applying," Kristine says. She also told him, "'You know this game. You know how it's played. You'd be great at it.'"

Kristine even helped Donny film his Big Brother audition tape, which she explains shows Donny standing up to reveal he had been sitting on a toilet and then flushing it. "It was something cute that would catch their attention," she says.

So far, Kristine says she thinks Donny is doing well in the game. Although Donny has been rocking the Battle of the Block and Power of Veto competitions, she'd like him to win HoH, not only so he can be safe in the house, but also so he can receive his basket from home and her letter. Kristine is also happy that Donny is a part of Team America, and he's able to win some extra prize money by completing the missions, but she's worried about the loyalty of his alliance members, from what she has seen on the live feeds. "I'm not real sure about Derrick and Frankie. They really seem to be turning against Donny," she says. "It may fall apart."

Still, Kristine's biggest concern for Thompson on Big Brother may be another kind of relationship with the houseguests. Kristine says her message to Donny right now would be to "quit flirting with the girls so much," as she let out a laugh. Sounds like nobody's going to get between this happy couple.

More like this
RHOP’s Robyn Dixon Explained Why Juan Paid For Another Woman's Hotel Room
By Brad Witter
Kaitlyn Bristowe Said Chris Harrison Ignored Her After Her 'Bachelorette' Hosting Gig
By Grace Wehniainen
Airris From 'MAFS' Says He Doesn’t Regret Going To Decision Day With Jasmine
By Brad Witter
'Bachelor' Fans Think Rachel & Clayton Are Dating After This TikTok
By Grace Wehniainen
Get Even More From Bustle — Sign Up For The Newsletter
From hair trends to relationship advice, our daily newsletter has everything you need to sound like a person who’s on TikTok, even if you aren’t.