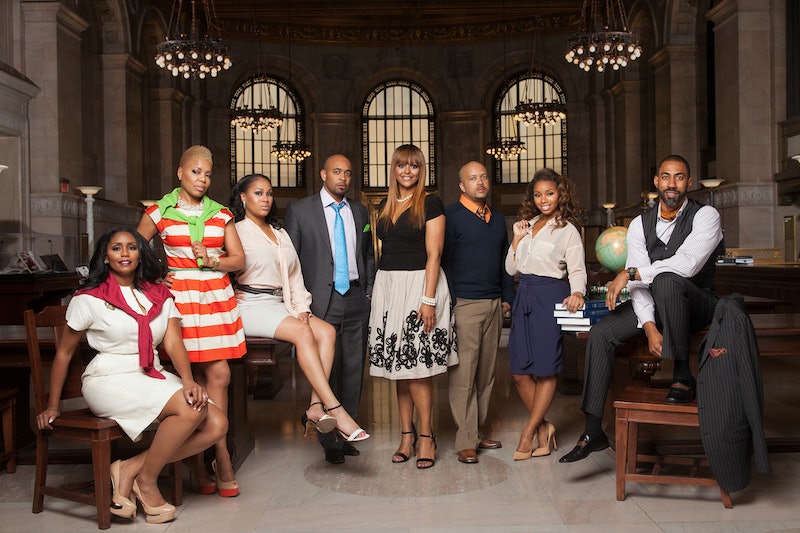 Lifetime will premiere a new reality series on Wednesday night called BAPs , which follows a group of self proclaimed tastemakers in St. Louis as they struggle through their 20s and 30s to live up to the expectations of their upper middle class parents. Shows like this are usually called something like The New Atlanta or Southern Charm — some combination of a place, adjective, and pun. So what's up with this weird title?

The name is probably based on the otherwise unrelated 1997 film B*A*P*S, starring Halle Berry as a girl from a poor Atlanta suburb who meets a wealthy white man who turn her and her friend into “Black American Princesses.” Lifetime also includes "and Princes" in their version of the abbreviation. Putting aside the stupidity of basing your title on a terrible movie from almost 20 years ago that no one likes or remembers, the title also carries another, more serious problem — it’s a play on “JAPs.”

“JAP,” or Jewish American Princess, is a stereotype applied to young Jewish women that implies that they're vapid, bratty, and nakedly materialistic. While it seems relatively harmless, it's the most contemporary version of stereotypes that have plagued Jewish American people for years, and throws in a little sexism too.

But if it passed for B*A*P*S back in the day, why not the more recent version? First of all, 1997 may be recent history, but it was a less informed time, before we knew the power of microagressions. And the movie trades in all sorts of stereotypes. The black characters are tacky, low class, and morally bankrupt, and there’s a lot of time devoted to the stuffy English butler being forced to deliver late '90s slang. At its absolute best, it’s a satire that takes on racial stereotypes and therefore gets a little bit of credit to play with language. And that’s generous, because it’s more accurately a tone-deaf attempt at comedy that embarrasses everyone involved.

Even Bravo, who’ve made their network on trashy reality TV, got flack for Princesses: Long Island, a spin on the “JAP” stereotype. While the girls happily embraced it — remember tiny, entitled Ashlee? — others did not appreciate what the show was saying about the Jewish-American community. But at least Princesses was about the specific Long Island subculture. While we did see a good deal of Jewish traditions, it mostly boiled down to an eccentric crash course in the South Shore.

But even in comedy, terms like “JAPs” still matter. It’s possible to be socially progressive and still poke fun at the quirks of different groups, and as a culture, we largely agree that calling women “JAPs” is not okay. So why should BAPs get a pass? The St. Louis cultural elite can identify that way if they choose, but Lifetime shouldn't be allowed to make a brand out of it.

Look, as the black middle class and upper middle class gain more money and education, it’s important to show that experience. But people aren’t excited for BAPs , and not just because of its title. The premise is tired, too. Supposedly BAPs is meant to demonstrate that getting drunk on white wine and playing tennis isn't just for white suburbanites anymore. But they've set up conflict between non-"BAPs" Kendrick and Rai Rai Evans and the rest of the cast, as if their different backgrounds are enough to make them hate one another.

It's great that more black people are growing up with middle class opportunities. And they have just as much of a right to act the fool as their white counterparts (what I wouldn't give for a black equivalent to Gallery Girls). But what made people excited for BAPs was the idea that we'd be seeing black professionals who had serious careers and businesses. Instead, this cast immediately starts denigrating poor people — talking about fearing the projects — and dissolve into petty squabbling just like every single reality show since The Hills.

Which is why maybe this answer isn’t in more reality shows, but focusing on scripted content. We already have Shonda Rhimes killing it on ABC with three dramas focused around multicultural casts of professionals. Emerging voices like Issa Rae (who has a deal with HBO) and Lena Waithe (whose pilot Twenties was picked up by BET) should be chiming in soon too.

In short, nothing upholds the status quo like sticking to outdated, offensive stereotypes. If BAPs is ever able to dig itself out of this PR nightmare, it’ll be by ditching its name and updating its approach to race and culture.