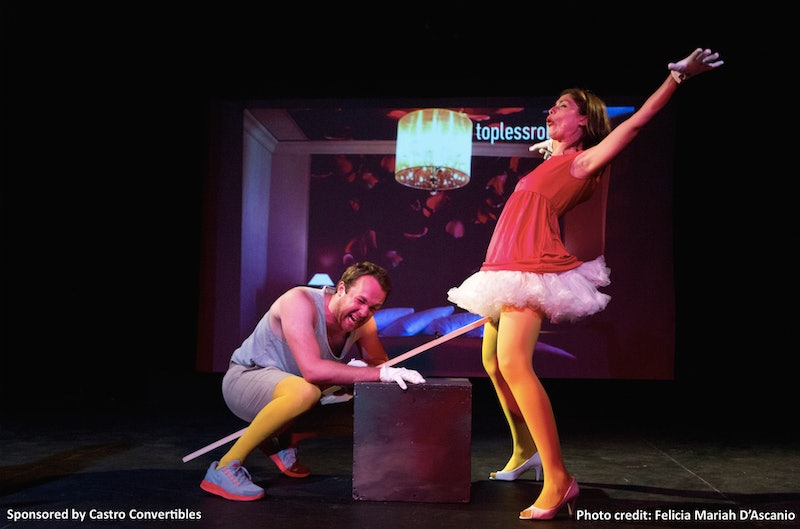 When comedians Allison Goldberg and Jen Jamula first invited me to see their sketch comedy show Blogologues, I wasn't sure what to expect. Their website announced that they were "the Internet performed," and they called themselves "a curated, thematic extravaganza." With a description like that, and in search of a date night activity, I allowed myself to be wooed into seeing Blogologue's hour-long show. It was the funniest hour of my life.

The brainchild of Goldberg and Jamula, Blogologues is everything it promises to be and so much more. The premise of the show is simple — find weird Internet postings (there are a lot), create context for Internet postings, perform Internet postings to live audience. But the production goes above and beyond its simple foundations — it is an extravaganza. And most impressive of all, Blogologues is extravagant without the use of fancy lighting, extensive music, or other theatrical trappings — in all reality, it's just some text, a few actors, and a projector on a stage.

In an interview with Bustle, I had the opportunity to sit down with the co-creators and discuss everything from the motivation behind the show, to the under-representation of women in comedy, to the need for theater to keep up with technology. What I found in my conversation with these two women is that they are more than just funny girls — they are visionaries.

Simply put, Blogologues is a performance of an original Internet post, be it a tweet, a blog, a review, or a message, by a talented group of actors. Goldberg, Jamula, and their rotating cast members select the strangest, funniest, and all-around best pieces from the dark recesses of the Internet and create give them context, thereby making the piece more relatable, more believable, and ultimately, more entertaining.

The beginnings of Blogologues

Blogologues, like all masterpieces, emerged after a series of frustrations and disillusions. Having both majored in theater at Yale University, Goldberg and Jamula entered the real world of acting eager to take on exciting roles and exercise their creative freedom. But unfortunately, both women quickly found themselves disappointed by the reality of opportunities available to women in the industry.

Says Goldberg: "When you grow up, theater is this creative process where you meet all these people and you're creating shows, characters, and journeys. But in the real world, it isn't that creative process — I was just being told what to do."

But with Blogologues, these limitations are essentially eliminated. Frustrated by casting based on age, gender, and other physical attributes, Jamula and Goldberg set to creating an outlet that broke all the rules, that was truly blind when it came to fitting the person to the role. And it is this concept that has allowed Blogologues to cast women as men, men as women, women as men who identify as women, and so on and so forth. This allows Blogologues to treat people as humans, not male or female entities.

And this is a particularly important principle in Blogologues' shows. Goldberg, Jamula, and their cast have a tangible respect for the authors of their sketches, to whom they pay a strange kind of tribute through their performances. While the Internet allows everyone to have a voice, Blogologues gives some of the more unique voices a live audience.

While comedic powerhouses like Tina Fey, Amy Poehler, and Mindy Kaling have begun cracking the glass ceiling for women in comedy, the space remains largely dominated by men. The reason for this, Jamula and Goldberg believe, stems from — you guessed it — social expectations.

While Jamula and Goldberg spend most their time performing, the duo has also been sought after to give creative workshops, and often for young girls. One particularly noteworthy experience came during a session at Phillips Academy Andover, a school that has been co-ed since 1973, but has managed to elect just four female student body presidents in the 41 years since coeducation.

When speaking to young women about this obvious imbalance in representation, Jamula and Goldberg were struck by the answers they received — boys were elected time and time again because they were funnier, more charismatic, and made more entertaining campaign videos. Girls, on the other hand, couldn't be funny because they wouldn't be taken seriously. As high school students, preparing for college and the real world, girls were made acutely aware for the need to be "studious and classy and put-together," Jamula tells me. The same just wasn't true for boys.

Even some of the young men at Andover seemed to voice the same opinion — in a New York Times article about the issue, a group of male students interviewed told the paper that the (normally male) president-elect "usually has stage presence and is entertaining," whereas "girls have to be more serious in order to be taken seriously, which makes them less electable."

This almost compulsive need for perfection, Jamula says, spills over into comedy and makes it a less accessible space for women.

"Women, from a young age, are told that they can't be the same kind of funny," she says. "Between the ages of 16 and 18, in particular, girls are trying not to mess up and look their best. But in comedy, it's not about being pretty."

"Girls don't want to look like gremlins," Goldberg adds, noting that while men simply don't have to have the same kinds of reservations about making fools of themselves. After all, "being gross," as Goldberg puts it, whether it be bathroom humor or smearing mud on the face, is often laughed off for men as "boys being boys," but is criticized as "unladylike" when performed by women.

But as Goldberg and Jamula have learned in their time with Blogologues, comedy is funnier the further out of the box and out of the comfort zone you go, and their show continues to push the envelope in every conceivable way.

Goldberg and Jamula may run a theater company, but their offices are located in AlleyNYC, a coworking space that is home to tech startups, entrepreneurs, and tons of other small businesses that seem to be worlds away from a sketch comedy group. But it is this tech-heavy environment that serves as inspiration for Blogologues — after all, their content is based on the Internet.

Blogologues' reliance on technology and modern media is not overlooked by Goldberg and Jamula, who have found that Internet content is the most relatable content available.

Says Goldberg: "Theater is supposedly created to reflect your own life on stage, but unfortunately, the theater industry as a whole isn't keeping up with tech trends and modern life. Our generation is less and less interested in going to see Becket and Shakespeare, but everyone is on Facebook."

As such, Blogologues draws on the everyday experiences and thoughts of everyday people, rather than relying on regurgitation of scripts from centuries past. And while these authors are abstractly aware that they are sharing their stories, they rarely consider who they're sharing their stories with -- and this is where Blogologues comes in. Goldberg and Jamula create a live, communal experience with the modern day denizens of the Internet.

Being part of the Alley community, the dynamic duo says, has made them all the more appreciative of the power of technology and the inter-connectivity it has allowed. "You're taught that artists are the creative ones," Goldberg says, "But it's the tech industry that sees things that don't yet exist and says, 'We need to create that.'"

Blogologues, then, is the intersection of art and technology, and boy, is it a beautifully hilarious place to be.