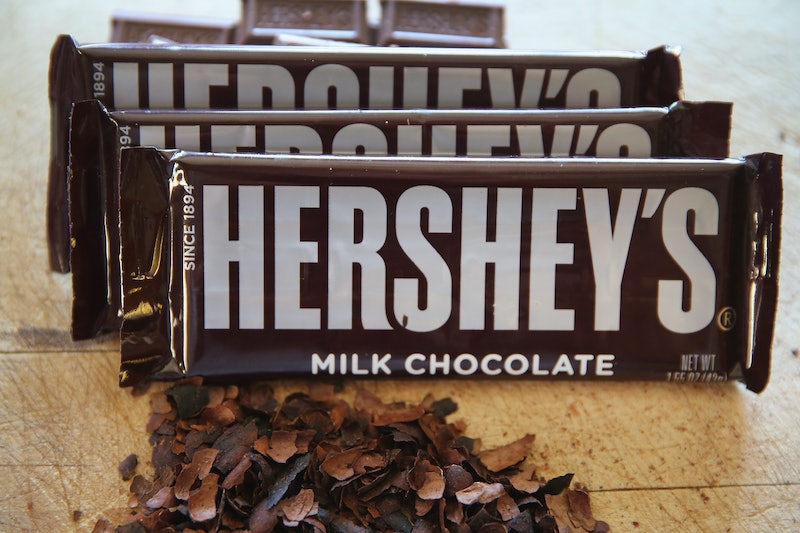 Federal Judge William Quarles issued a preliminary injunction last Thursday preventing Hershey Jr. from using any more fliers or signs that copy the chocolate company's iconic logo. Hershey Jr. claims his campaign imagery is different enough from the famed chocolate bar wrapper's design that it shouldn't be an issue — "Consumers and voters alike know the difference between a state senate campaign and a chocolate bar," his attorney told The Baltimore Sun — but he'll reportedly cede to the injunction and stop using such materials.

It kind of sad how it all backfired for Hershey Jr., a politician clearly trying to drum up a little attention for his election bid, and getting it for all the wrong reasons. Political campaigns are a lot of work, and it's a safe bet that he had enough on his plate without the corporate lawsuit.

Still, Hershey should've seen this coming, because he's been here before. While running for county commissioner in 2002, according to the AP, he was using the same strategy to get his name out there — brown backgrounds and white lettering. Which is, again, a clear play get to people associating his name with the chocolate titan. Hershey for county commissioner? Why, that sounds delicious!

But even 12 years ago, Hershey Jr. knew he was doing something that the company wasn't happy about. They contacted Hershey Jr. and asked him to stop using the offending materials, and to his credit, he did — until he dusted it off during his run for state delegate in 2010, again catching the company's attention.

The case hasn't actually been decided yet, though Quarles' preliminary injunction will stand throughout the remainder of the case. The injunction gave Hershey Jr. until Tuesday to pull down all such Hershey's-style ads from his website, and from any roadside displays. While his campaign website has apparently been pulled down, as The Baltimore Sun reports, it's not yet clear if all the physical signs and other materials were taken down by the deadline.