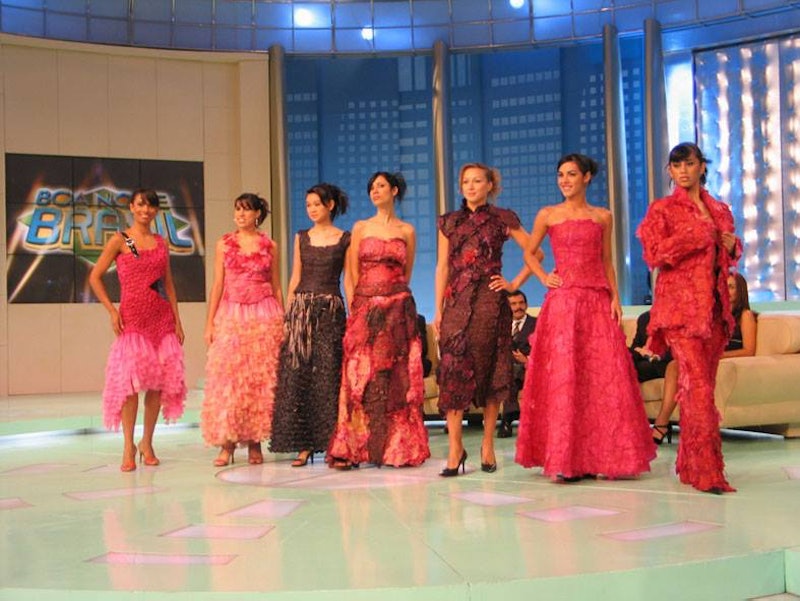 We've seen clothes made out of crazy materials before — toilet paper wedding dresses, duct tape prom ensembles, book page gowns — but condoms? I never thought that day would come. And now it has, with Adriana Bertini's Condom Couture. Bertini's dresses are prophylactic stunners that will change the way you think about fashion (and safe sex).

Bertini gained media attention after one of her dresses, an intricate creation in sunflower yellow, was displayed at the 20th International AIDS Conference held in Melbourne. BuzzFeed's Mark Di Stefano reported on the masterpiece, along with the other fantastic concoctions on display at the conference, shedding some light on Bertini and the ethos behind her Condom Couture project.

According to Di Stefano, "Bertini puts on workshops aimed at raising awareness for safe sex messages, in an effort to combat STIs and HIV/AIDS." HECK YES. This woman is a hero. The workshops allow people to get involved in the creation of Bertini's condom dresses. Participants help with "the process of dying, shaping and assembling condom art," says Di Stefano, all the while discussing the important role of condoms in safe sex.

The super hands-on process gets workshop participants comfortable with touching and handling the condoms. This is pretty much the opposite of the average sex education program in the United States, which generally encourages an attitude of fear and shame surrounding sex (even safe sex). I motion to replace traditional sex education with one of Bertini's art-and-discussion sessions because seriously, how freaking cool/informative would that be?

Bertini only uses condoms that have expired or failed quality control, so she isn't even wasting usable condoms on her craft. This just keeps getting better, now doesn't it? I'm not sure many people would wear a condom dress, but I'm delighted that they exist nonetheless and want to sign myself and everyone I know up for one of her classes. Want more Bertini? Check out her Facebook page.