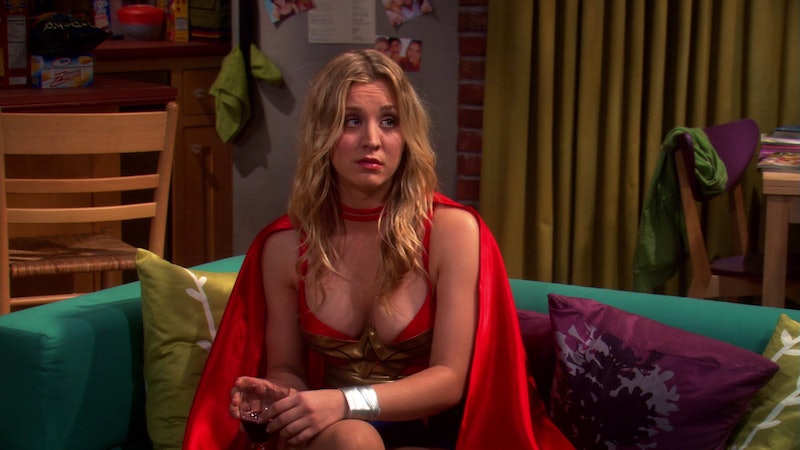 I have always had a precarious love of The Big Bang Theory. On the one hand, it's one of the few shows that speaks to my fandoms, and it's also the only program I know of that features two female scientists. Yet its racial stereotypes, flat characters, and The Big Bang Theory's sexist view on relationships usually keep me from watching. And yes, Penny is at the heart of many of those issues, since she was set up as the not-smart girl next door. Now that Chuck Lorre has announced that Penny will be leaving acting to pursue a career as a pharmaceutical rep, well I have some feelings.

First of all, why won't the show let Penny achieve her dreams? Wolowitz got to go into space, despite the unlikely nature of that plotline! Sheldon used to run into Wil Wheaton all the time! Yet somehow, amidst the gang's impossible promotions and amazing projects, Penny always gets left behind. Her role in a B-movie was cut, and now she has to settle for something in Bernadette's field.

As if this weren't bad enough, Lorre's description of her new situation sets up a tired trope: the woman who suddenly makes more money and her emasculated husband. Lorre told The Hollywood Reporter , "She's going to start making some money, which will unbalance their relationship as the power shifts ... She's going to find some confidence and self-esteem, which acting does not provide in great heaping doses." It's nice to know that we still live in 1979, where men are insulted when their fiances surpass them in take-home pay. I understand that he might be trying to show that show business isn't for everyone, but this upcoming "conflict" reeks of tired sexist plot-hacking.

I'm excited to see a female character on The Big Bang Theory achieve more success than the boys, but if it's going to set up a tired "can she have it all" character arc, I think I'll finally have to leave this show behind. Penny, you deserve better than this.

More like this
Sandra Bullock, Girlboss Extraordinaire
By Matt Harkins & Viviana Olen
'Doctor Who’s New Star Is Already Huge On TikTok
By Maxine Harrison
What’s New On Netflix: A Victoria Justice Rom-Com & The Return Of David Letterman
By Arya Roshanian
How Ncuti Gatwa's 'Doctor Who' Casting Impacts His 'Sex Education' Future
By Nola Ojomu
Get Even More From Bustle — Sign Up For The Newsletter