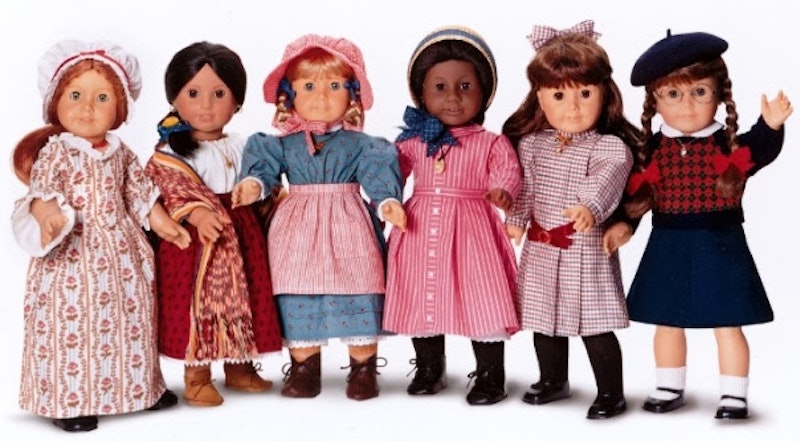 The day I learned that the classic American Girl dolls with which I had grown up were regularly retired was a sad one, indeed. How could they do such a thing? It was a crime to rob future generations of these dolls and their remarkable stories! But alas, such is the nature of business; once Mattel bought out Pleasant Company in 1998, it was only a matter of time before things like this started happening. If you ever wondered what they’ve been up to since their retirement, though, good news! We’ve got some answers!

Created by Pleasant Rowland, Pleasant Company launched in 1986 with what would later become known as the American Girl Historical Collection. The three dolls initially on offer were Kirsten Larson, a plucky pioneer girl from 1854; Samantha Parkington, a well-to-do Edwardian orphan living with her grandmother in 1904; and Molly McIntire, a girl from 1944 whose father had gone off to fight in the Second World War. Felicity Merriman, the spunky Colonial spitfire from 1774, made her debut a few years later in 1991. Sadly, though, these four dolls have since been “archived,” with Samantha going first in 2009, followed by Kirsten in 2010, Felicity in 2011, and Molly in 2013.

So, in honor of Throwback Thursday, we figured we’d take a moment to catch up with each of these characters. OK, to be fair, we didn’t actually talk to them — they’re dolls, after all — and no, the descriptions that follow aren’t particularly historically accurate (fine, we totally made them up). We still get a kick out of the idea of, say, Samantha running a modern day charitable non-profit, though.

Threads of silver weave their way through Felicity Merriman’s distinctive red hair; despite her apparent age, however, she remains as spry and young at heart as always. We chat over cups of chocolate — still a favorite treat of hers — watching her horses stampede their way around their paddock. Her beloved Penny, alas, departed many years ago; Patriot, however, remains (even if he is getting up there in years — “We are none of us getting younger,” Lissie remarks), as do the results of a few successful breeding attempts with one of Felicity’s neighbor’s beasts: A pair of siblings she named Stars and Stripes. She loves riding as much as ever.

Felicity, much to her mother’s chagrin, ended up taking over her father’s store. Although she was often accused of “flightiness” and “thoughtfulness” as a young girl, she found she had a good head for business; she also still derives a great deal of joy from imagining the journeys each item takes before it arrives at the shop. “Running a business isn’t very ‘ladylike,’” she laughs, “but then, I was never much one for the trappings of ladyhood.”

Although Elizabeth Cole has long since moved away Williamsburg, the two friends still keep in touch; the exchange letters and postcards regularly, and catch up whenever one of them has the time and resources to travel. With her knack for sewing, it was only a matter of time before Elizabeth made her debut in the fashion world; although she admits having been helped along by her parents’ wealth, she has built up quite an empire of her own. Her designs are coveted by many, season after season.

And what of Benjamin Davidson, her father’s former apprentice? “We flirted on and off as we got older,” Lissie says, “but we eventually came to the conclusion that it was never meant to be. We were both too headstrong to make a good match — we make better friends than partners.” Benjamin did eventually marry “a lovely woman,” Felicty says; they all have dinner together once a month.

Does she miss being in the spotlight, with every aspect of her life held under a microscope? She shakes her head as she drains the last of her chocolate. “Life is good,” she smiles.

Kirsten Larson and her family are still incredibly close; although they are all grown, they still live within walking distance of each other and have dinner together every other weekend. The next generation has popped up, as well, with all of the former Larson children now old enough to have children of their own — including Kirsten herself.

She has a busy life. In addition to her roles as mother of two (both as blond as she is) and wife to her husband, Kristof Aker (Kirsten kept her maiden name), she runs her own shipping company. Her head for business — which, she says, she first realized she had when she found that honey tree the summer she turned ten — has stood her in good stead. “It can get to be a bit much sometimes, all of this going on at once,” she tells me as she takes a moment out of her day to speak with me in her office, “but it’s worth it.” At least, she says, she doesn’t have to worry about anyone chronicling her life as she goes anymore; she’s free to spend her time as she wishes.

Although the Larson family has stayed in Minnesota, rather than venturing out to other areas of the country, they still hang on to their pioneering spirit; each time Kirsten brainstorms an idea for her business or an innovative way to keep her household running smoothly, she thanks her parents for setting her on a path that would keep her trying new things — even if those things might be frightening at first. “Nothing is more important than the spirit of pioneering,” she says. Without it, we would never move forwards; progress, she says, is everything.

I can see Kirsten has much to do, so I thank her for her time and prepare to take my leave. “My pleasure!” she says, standing up from behind her desk and quickly coming round to shake my hand. “You must join us for dinner this weekend,” she says. “You haven’t lived until you’ve tried my mother’s pastries.”

Upon sitting down to speak with her in her well-appointed New York home, it becomes quickly apparent that there are two Samantha Parkingtons: The public one, and the private one. The well-known philanthropist’s public persona speaks fiercely and passionately about the issues she cares about and runs her non-profit organization with strong, steady leadership. Her private self, however, she keeps out of the limelight, revealing few details even to those she agrees to speak with. Indeed, in recent years, she has even taken more of a behind the scenes role in her organization, making way for her friend, partner, and adoptive cousin Nellie to take the reins. She believes, though, that the time may be right for a comeback. “I needed some time for myself,” she explains. “Time to recharge, if you will.” She stresses, however, that Nellie has done a remarkable job with the organization in her absence. “No one is as passionate about the work we’re doing as Nellie,” she says.

Sam still dresses as stylishly as ever, her suits well-tailored and her presentation impeccable. However, she refrains from donning both designer gear — “it would be hypocritical of me to wear outfits that cost more than what so many people make in a year” — and fast fashion — “I couldn’t bear to give money to one of the industries we’re trying so very hard to change.” In contrast with her opulent upbringing, she lives modestly, instead donating her time and considerable wealth to the causes she supports.

Grandmary, sadly, is no longer with us; Samantha keeps a framed portrait of the grandmother who raised her in her living room. What would the former Edwards matriarch say of Sam’s path in life? “She might have been a little shocked at first,” Samantha chuckles, “but she would have come round to it in the end. Uncle Gard and Cornelia” — Gardner and Cornelia Edwards, Samantha’s aunt and uncle and Nellie’s adoptive parents, who are also active in the non-profit — “would have talked her into sense if I couldn’t.”

Samantha will reveal no details about her planned return to the public eye; she does, however, tell me that it will be something worth watching. “Just wait and see,” she says, a twinkle in her eye hinting at greatness to come.

After her childhood adventures came to a close, Molly McIntire went on to Bryn Mawr; she graduated suma cum laude with a degree in Education and — of course — a minor in Dance. All her years of tap dancing have made her knees a little weak as the years have gone on, but she still harbors a deep love of the art. We talk in her vegetable garden, a hobby she picked up after the years of Victory Garden produce of her youth. “As I got older, I realized it was a terrific way to live sustainably,” she says — although she absolutely refuses to grow turnips. “Some things never change,” she laughs.

She teaches these days, hoping to be the same sort of influence on her students Ms. Campbell was on her as a young girl. She still hates math, but she tries not to let it show; she knows now that it’s a life skill worth learning at an early age, and she does her best to make the subject at least bearable for her students, if not fun. She also encourages giving back to the community, setting an example herself by volunteering, holding fundraisers, and more at every opportunity. “Ms. Campbell taught me that lending a hand really is its own reward — oh goodness, do I sound like an old fogey? Ah well,” she says with a grin. “Age before beauty and all that.”

Speaking of beauty, Molly remarks that although it took her some years to be at peace with her appearance, she’s happier than she’s ever been with it and herself. She’s especially appreciative of what she calls her “wash-and-wear hair”; she may never have the curls she yearned for in her youth, but “I know I’d never have the patience to deal with big hair all the time, anyway,” she says. She also loves using her huge collection of eyeglasses as fashion accessories; her partner, too, loves her ever-changing eyewear. If it’s possible for two words that seem so at odds with each other to pair together, I would say that Molly exudes a sort of bombastic elegance. There’s no other way to describe it.

Darkness begins to fall. “Come on back inside,” Molly says. “I’ll teach you how to make the best baked ratatouille in the world.” Maybe I should start my own vegetable garden…

More like this
Remember These Ancient Pieces Of '90s Tech?
By Lucia Peters and Emma Carey
11 Trends From The ‘90s That Made You Feel So Cool
By Julie Sprankles
Starbucks’ Chocolate Cream Cold Brew Tastes Like This Retro Candy
By Emma Garza
8 Creepy Things You Probably Did In The '90s
By Julie Sprankles
Get Even More From Bustle — Sign Up For The Newsletter