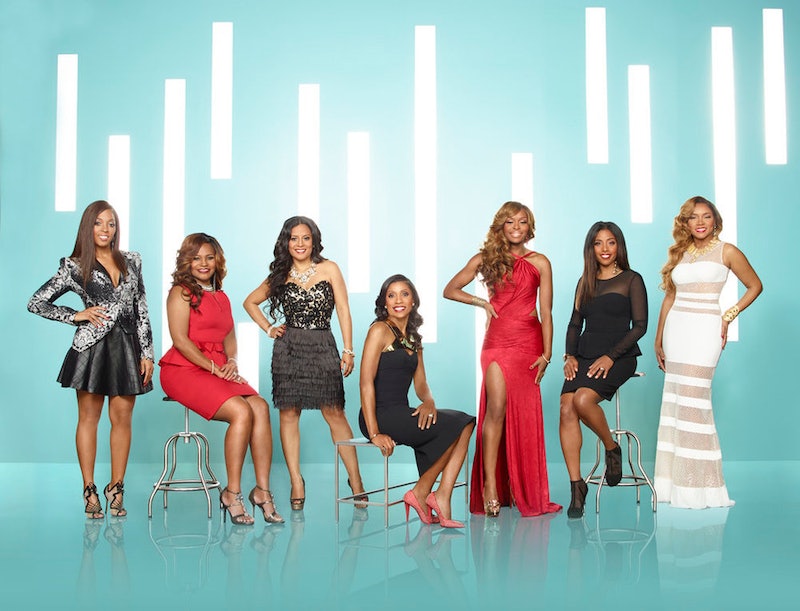 Bravo's medical reality drama is a hit, and while it still doesn’t compare to the constant hysterics of The Real Housewives, Married to Medicine really hit its stride in Season 2. The cast is just as much fun when they're getting along and have adult-themed slumber parties as when they're ganging up on executive producer and costar Mariah Huq.

While Bravo hasn't officially announced whether or not Married will be back Season 3, Huq posted hints on her Bravo blog. After writing a series of apologies to the ladies in hopes that they could still be friends, she added at the bottom, "Time to plant new seeds or grow another grove!" As Quad would say… that's some shady apes. She seems to be hinting that she'll either be shaking up the cast with some new "seeds" or moving on to produce an all-new show.

Hopefully, she doesn't know something we don't about the fate of Married to Medicine's third season. The show finally delivered on its promise this year, mostly because the ladies are ones you might not want as your closest friends, but you wouldn't mind running into every once in a while at a party. Quad has Atlanta vernacular ready for every situation, like Phaedra Parks hyped up on Heavenly's "special coffee." Simone may be an amazing doctor, but her attempts at quips are so long winded they're make even less sense than Quad's. Jackie stays out of the fights, but gives monumental side eye. And even Mariah seems pretty fun to hang out with (so long as she leaves her mom at home).

More than anything, the way these women talk like drag queen soap opera characters elevates even their boring conversations. After watching a single episode, you'll be spilling the tee and throwing shade all over the place. Here are ten phrases, in .gif form, to start with:

1. Always give yourself the credit you deserve.

Don't hide your light under a bushel of modesty!

2. And if haters come knocking, let this rip:

Now there's a creative way of telling them to shut the hell up and mind their own business.

3. Friends don't let friends gossip about things they know nothing about.

But keep it light by using a handy garden metaphor.

4. If you run into a frenemy, don't let her ruin your night.

Try to diffuse the conflict by walking away. Or something.

5. But if you do fight, she's better watch out.

Because you'll be right there throwing punches back… metaphorically speaking.

6. But if it can be avoided, don't get into petty squabbles.

That would just make you look bad. Instead, conduct yourself like a queen and ignore the bait.

7. But don't stand for attitude from others.

If you're on the receiving end of the queenly treatment, you can pull her aside to let her know she's acting a fool.

If you two are able to mend your relationship, then celebrate the best way known to man.

It's a shame Carrie couldn't be a part of Season 2, because back in the season one premiere, she delivered the defining line of Married to Medicine and the perfect way to let someone know that their behavior is utterly unacceptable. Gone too soon, Carrie. Gone far too soon.

After that, you HAVE TO be on the edge of your seat waiting for Married to Medicine Season 3. We'll just have to wait until Bravo unveils their 2015 slate to find out.

More like this
What’s New On Netflix: A Victoria Justice Rom-Com & The Return Of David Letterman
By Arya Roshanian
What’s New On Netflix: The Return Of 'Bling Empire' & A Rebel Wilson Comedy
By Arya Roshanian
Kanye Walked Out Of Kim's 'SNL' Monologue Because Of These 2 Words
By Jake Viswanath
Kevin Kreider Finally Asked Out Kim Lee On 'Bling Empire'
By Brad Witter
Get Even More From Bustle — Sign Up For The Newsletter