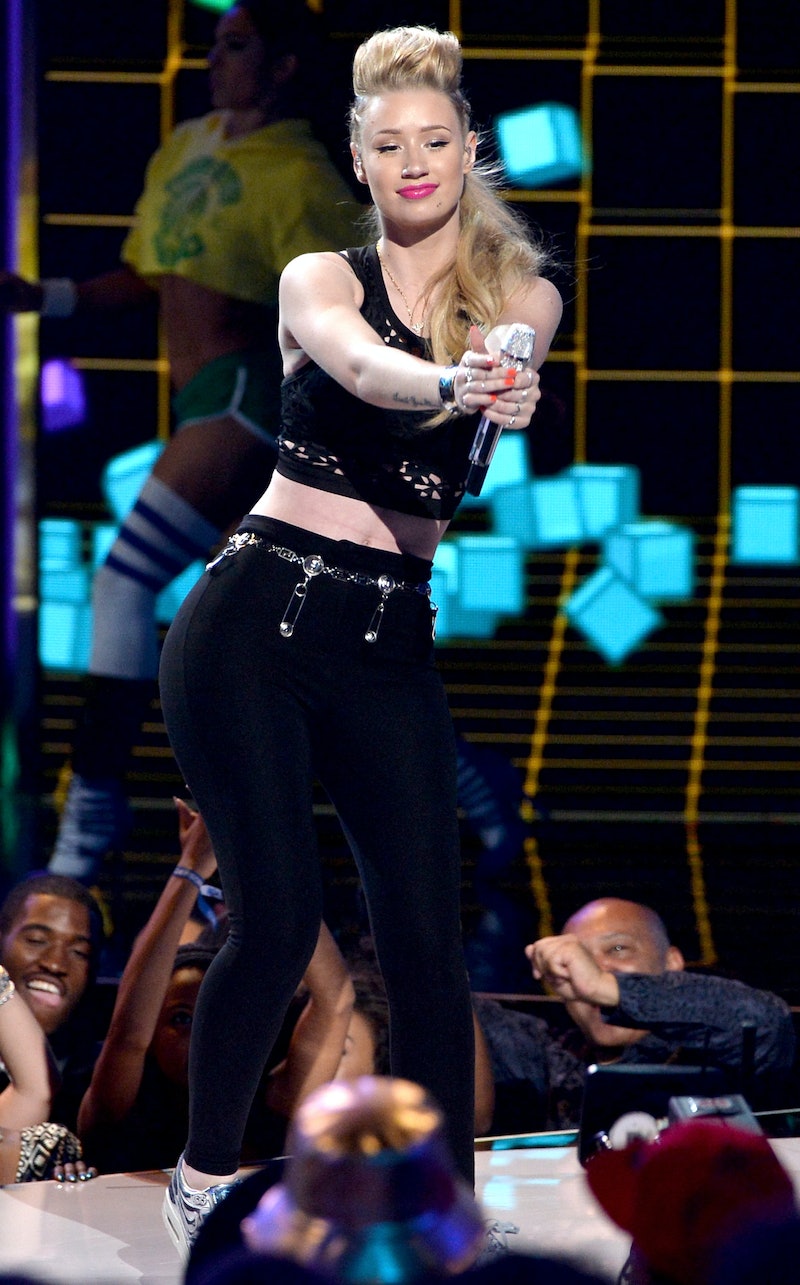 Is Iggy Azeala really as "fancy" as she claims to be? Well, according to T.I., she sure is. Not that I had many doubts towards the 24 year old Australian bombshell. Azalea came in and stormed the scene so hard and fast, that it gave the once reigning queen of Hip Hop, Nicki Minaj, whiplash. It just doesn't seem plausible to me that someone with that much gusto and passion behind their performances could be a fake. Not that recording artists are "fake" if they don't write their own music, songwriting is an art form and an ability that not everyone can be blessed with, but in terms of this debacle, whether Azalea wrote her own rhymes was most certainly at the front and center. Mainly, as Billboard points out, because Minaj insinuated that her fellow female rapper had some help crafting her songs.

But T.I., who owns Grand Hustle Records, the company with which Azalea is signed, says there's no way he could have written for her. He explained to Bijou Star TV,

"Iggy got her own ideas and thoughts that she presents to the world in her own way. I couldn’t write a lot of the shit she say, you know? I couldn’t put her thoughts into words as articulate as she does. You know what I’m saying? She just has a different way of presenting herself and her art."

And yes, I do get what he's trying to say. The main reason for Azalea's seemingly instant success is because she has a unique sound and attitude, one that appears to be distinctly, "her." And it's a style that's not easily replicated, even by him.

Perhaps the most troubling part of this whole Minaj-Azalea feud is that instead of welcoming another young and talented female artist and showing her the ropes, Minaj instead chose to pit them against each other. And it's especially surprising if you recall just how hostile Lil' Kim was towards Minaj when she was new to the business. "Black Friday," anyone? We just hope that the rumors can finally be put to rest and that Azalea can keep on pumping out tunes that make me wanna jam out to.

More like this
Spice Girls’ Net Worth: The Richest Member Is Wealthier Than The Rest Combined
By Hugh McIntyre
Is Megan Fox Pregnant? MGK Gave A Shout-Out To Their “Unborn Child” Onstage
By Hugh McIntyre
Twitter Is Upset About The 'American Idol' Top 3 Results: "Who TF Is Voting?"
By Jake Viswanath
Stormi Just Walked A Red Carpet With Mommy Kylie Jenner & Daddy Travis Scott
By Hugh McIntyre
Get Even More From Bustle — Sign Up For The Newsletter