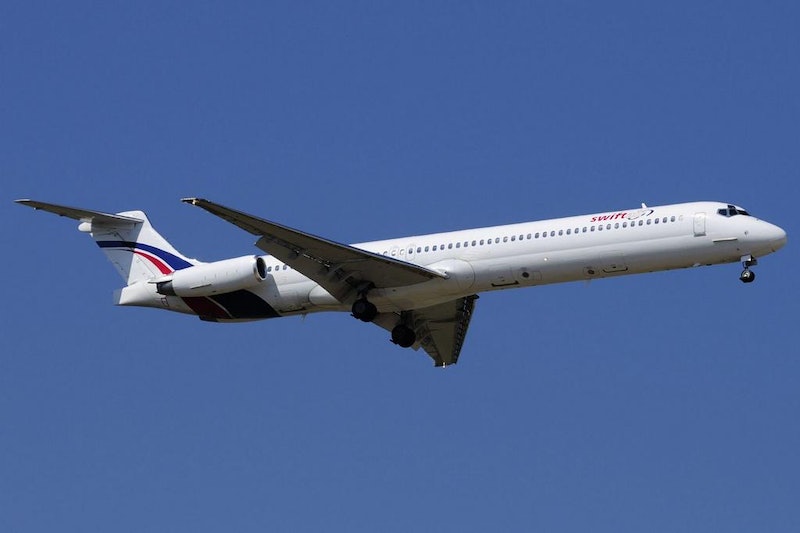 According to French President Francois Hollande, the black box for Air Algerie Flight AH5017, which crashed on Thursday in Mali, has now been found. The recording device — one of two of the jet's black boxes — will go a long way in figuring out just why the plane went down. So far, no causes have been confirmed, and none have been ruled out, either. All that is known for sure is that, tragically, none of the 116 passengers on board survived.

The Chicago Tribune reports that the Burkina Faso crisis unit, led by General Gilbert Diendere, has already inspected the remains of the aircraft. The general told local television reporters, "This team has confirmed that it has seen the remains of the plane, totally burned out and scattered on the ground," and further noted that his team also saw the remains of the passengers.

Said Diendere, "Sadly, the team saw no one on site. It saw no survivors."

Eye-witnesses, most of them herders who were in the bush when the plane fell from the sky, believe that the plane was struck by lightening, which caused the crash. Louis Berthaud, a community counsellor in Gossi who spoke to the herders, told Reuters, "It must have been a storm and it was struck by lightning. They said it was on fire as it fell, before it crashed."

Air Algerie has not had a major accident in over a decade. Its last serious incident occurred in 2003 when a plane crashed soon after taking off, claiming 102 lives.

According to the Associated Press, officials from the West African nation of Burkina Faso report that victims' remains from the wreckage of Air Algerie flight AH5017 have been uncovered near the village of Boulikessi.

Reuters reports that wreckage of Air Algerie Flight AH5017 has been spotted by search planes in northeastern Mali. President Ibrahim Boubacar Keita confirmed the sighting on Thursday in a meeting with political and religious leaders in Bamako. "I have just been informed that the wreckage has been found between Aguelhoc and Kidal," Keita said.

Air Algerie also confirmed the crash via Twitter, saying the plane went down about 70 kilometers from the city of Gao. The Ouagadougou Airport, where the flight departed from on Thursday, said in a statement that French forces stationed in Mali have found wreckage of the plane between Gao and Kidal, " a very inaccessible desert area."

According to the AFP news agency, the French government said it's going to look into every possible cause for the plane crash. "We cannot, we must not exclude any hypothesis before having all elements," said France's Foreign Minister Laurent Fabius, as quoted by the news source.

Flight AH5017 was en route to the Algeria capital of Algiers from Burkina Faso when it reportedly disappeared from radar about 50 minutes after takeoff. There were 110 passengers and six crew members on board. According to BBC News, 51 of the passengers were French citizens.

Thus far, the search for Air Algerie Flight AH5017 that disappeared and probably crashed somewhere near Mali is still ongoing, in spite of reports to the contrary. Right now, it's more questions than answers: where did the MD-83 go? Did it crash — and if so, why? Could this be a repeat of the tragic MH17 crash in East Ukraine, which was brought down by a missile? Most importantly, are there any survivors?

"I can confirm that it has crashed," an Algerian official, who wanted to be kept anonymous, told Reuters, though French Foreign Minister Laurent Fabius has said that the aircraft has yet to be found.

The Telegraph reports that the plane had apparently been examined a couple of days ago and was apparently fine. Patrick Gandil, head of the French civil aviation authority, said that the plane "passed through France in Marseille two or three days ago. We examined it and we found almost nothing, it was really in good condition."

There were reportedly 110 passengers and six crew members on the plane, which was making its way from Burkina Faso to Algiers, when it apparently lost contact with air traffic control. It reportedly changed course because of storms shortly before disappearing off the radar, and never made it to its final destination. Five of the passengers were apparently Canadian, and at least 50 were French.

ABC News is reporting that Mariela Castro, Fidel Castro's niece, was among the passengers of the missing Air Algerie Flight AH5017.

According to The Telegraph, French Foreign Minister Laurent Fabius has said that the search for the plane is now "focussing at this stage on a vast strip of Malian territory around the region of Gao."

The search for the missing Air Algerie Flight AH5017 continues, with various conflicting reports surfacing regarding where and whether the plane in fact crashed. French Foreign Minister Laurent Fabius told journalists in France that "despite intensive search efforts no trace of the aircraft has yet been found," adding that "the plane probably crashed."

At the same time, Air Algerie tweeted that AH5017 crashed in the region of Tilemsi, 70 km from Gao.

A passenger list for Air Algerie Flight AH5017, which disappeared and reportedly crashed somewhere on the way to Algeria earlier today, has now been released. Among the passengers were five Canadians, four Germans, one Ukrainian, six Algerians, 27 Burkina Faso nationals and 51 French.

An Algerian aviation official has confirmed via Reuters that the missing Air Algerie Flight AH5017 crashed earlier today, though there aren't any specific details regarding its whereabouts, or why it went down.

Air Algerie has confirmed 50 French citizens on the Air Algerie Flight AH5017 that disappeared over northern Mali. According to Reuters, the French military will now be sending in two fighter jets to help in the search for the missing MD-83, whose reason for going missing is still unknown. Unnervingly, an aviation expert told CNN that “there is no reason to think there is anything mechanically wrong with the plane. There is some reason that it flew over restricted airspace.”

France's transport minister has now confirmed that Air Algerie Flight AH5017 disappeared over northern Mali, the Burkina Faso transport minister also added that the plane had been asked to change course mid-way through the flight due to a storm. Reuters reports that a search has now begun to find the missing plane:

"We do not know if the plane is in Malian territory," Issa Saly Maiga, head of Mali's National Civil Aviation Agency, told Reuters. "Aviation authorities are mobilised in all the countries concerned — Burkina Faso, Mali, Niger, Algeria and even Spain."

As the world reels from the MH17 tragedy, yet another aviation disaster appears to be underway: on Thursday, Air Algerie Flight AH5017 went missing on its way from Burkina Faso to Algiers, according to reports. The plane apparently lost contact with air traffic control 50 minutes after it took off from Ouagadougou, and has not since arrived at its destination in Algiers. Some reports are suggesting that the plane crashed over the Niger river. According to the Wall Street Journal, the plane was carrying 110 passengers and six crew members.

Reuters reports that Swiftair — a private Spanish company that owns the plane — posted a statement on its webpage Thursday morning, stating that the Air Algerie Flight AH5017 had taken off from Burkina Faso just after 1 a.m. local time, and was due to land four hours later at 5:10 a.m. — but it never made it to Algiers, and lost contact with navigation systems at roughly 1:55 a.m. "Thus far, we have no contact with the airplane," Swiftair said in a statement.

Nothing has yet been confirmed about what could have happened to the missing Air Algerie plane, but some are already fearing a repeat of the the MH17 disaster. According to The Telegraph, the flight from Ouagadougou to Algiers is pretty much a straight line — but it passes over Mali, a country that the FAA considers a "high risk" flight zone. Other independent journalists have noted the storm-like conditions of the region, according to the Daily Mail. Chinese State news, on the other hand, has reported that the plane has crashed in Niger — but this hasn't been independently confirmed yet.

The disappearance, of course, comes only a week after Malaysia Airlines Flight MH17 crashed in east Ukraine, killing all 298 people on board, after being hit by a missile of unknown sources.

More like this
The Music Industry Continues To Fail Black Women
By Precious Adesina
How To Fight For Reproductive Rights, Based On How Much Time You Have
By Courtney Young
Sarah Everard’s Killer Wayne Couzens Is Appealing His Whole-Life Sentence
By Sophie McEvoy
30 Expensive Mistakes You Don't Realize You're Making With Your Car
By Claire Epting
Get Even More From Bustle — Sign Up For The Newsletter