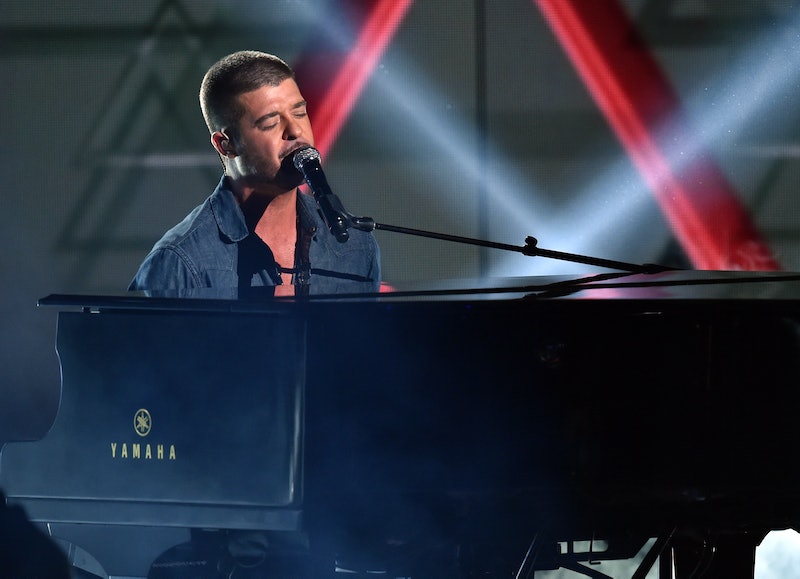 It's official, guys. Robin Thicke is moving on. After Thicke and wife Paula Patton split in February, Thicke has notoriously been launching an entire public campaign to get her back — mainly through performing a lot of songs about, you know, getting her back and then releasing an entire album of songs called Paula. While the rest of us found this creepy, it seemed that Thicke genuinely believed that this was the one true way back into his ex-wife's heart. When Thicke and Patton's home went on sale on Monday, we assumed that was the final nail in this marriage's coffin and we were right. Now even Robin Thicke admits the marriage is over and he's getting ready to move on.

According to TMZ, listing their home as for sale was Thicke's way of finally throwing in the towel on the highly publicized creepfest that was Paula's promotional tour. However, despite being five months late to the realization that he and Patton are no longer married, Thicke refuses to be the first one of them to actually take the step to file for divorce. He's "done begging" for her back, but he's not going to slam the door on her either. That would probably be more sweet if this didn't come after the release of Paula, which makes Thicke's refusal to file for divorce seem like just another way for him to dig his heels in and cling to whatever's left of his relationship with Patton.

Then again, if Patton wanted to be fully divorced rather than separated then it's quite likely that she would have filed for divorce herself in all the time that has passed since February. By not being the one to file first, Thicke could just finally be taking her feelings into consideration when it comes to his treatment of their relationship. After all, divorce proceedings are lengthy, time consuming, and — when the papers leak — intensely public things. By letting the separation lie and agreeing to stop tearing up every time he plays "Get Her Back" on stage in front of people, Thicke is basically finally allowing Patton to have some peace of mind.

Admittedly, I remain firmly Team Paula Patton in this whole incident but that's just because Paula Patton didn't turn the sordid details of her marital problems into an album to make a profit off of. I'm all for Robin Thicke moving on because, ultimately, both of them deserve to be happy even if it's not with each other, but what I want more than anything is for Thicke and Patton to find a way to become friends again. This rekindled friendship would hopefully begin with Thicke apologizing for everything about Paula and Patton making him grovel for a few months.