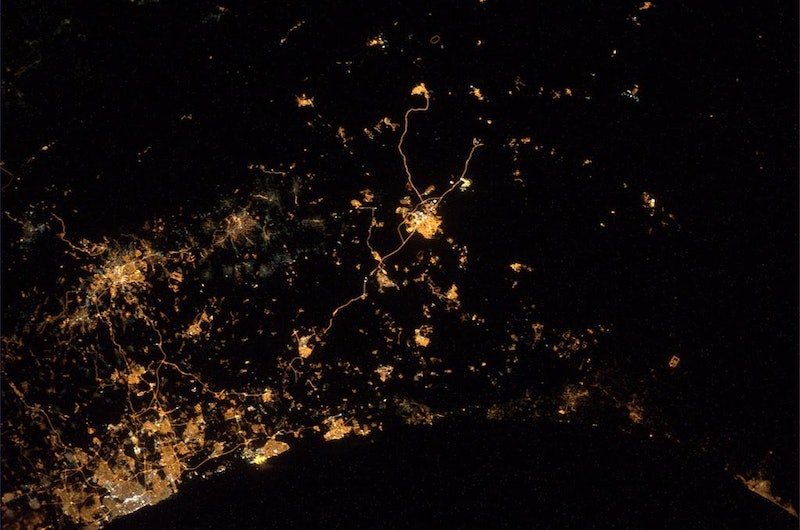 Every day, the Gaza crisis seems to reach new heights, with death tolls from the violence edging ever-nearer to 1,000. It's so intense, it turns out, that the Gaza conflict can even be seen from space. Thanks to astronaut Alex Gerst, you can now see the orange glow of explosions in Gaza and Israel, as captured from 200 miles above the Earth — heart-wrenching and horrifying, of course, yet somehow eerily beautiful, too.

In spite of talks of a ceasefire yesterday (and the day before, and the day before that), Israel's offensive into Gaza, which began in response to rockets fired from Hamas, continues unabated. According to the U.N., over 140,000 Palestinians in the Gaza Strip have now had to flee their homes and seek shelter in various — limited — U.N. centers. On the Palestinian side, the death toll has now reached over 718 people, most of them civilians and over a hundred of them children — prompting the U.N. Human Rights Council to say there's a strong possibility that Israel is guilty of war crimes. In Israel, 32 soldiers have died, as have three civilians. It's an impossibly grim situation.

On Wednesday, a different side of the Gaza war was captured by Gerst, a European Space Agency astronaut currently serving as a flight engineer on the International Space Station. From his Twitter account, he shared a nighttime picture of the area around the Israel-Gaza border, lit up by the streaks of orange made from rockets and bombs (though Haaretz points out that the streaks could also be “Iron Dome interceptions or the explosion of Israeli munitions.”)

"My saddest photo yet. From #ISS we can actually see explosions and rockets flying over #Gaza & #Israel," he tweeted, along with a picture. The tweet instantly went viral, with tens of thousands of people sharing the uncanny image.

As The Space Reporter points out, this is the second time that an image of conflict has been captured from space — back in 2008, a picture taken by cosmonaut Oleg Kononenko showed the region of South Ossetia, soon Georgia was taken over by Russian forces.

Of course, for the hundreds of thousands of people currently affected by the all-but-intractable crisis in the Middle East, having their fear and suffering captured by an ISS camera is probably an unwanted privilege. But the photo brings something important to the fore: that war, no matter how far away it may seem, is happening right here in our world — and that Earth isn't so big, after all.