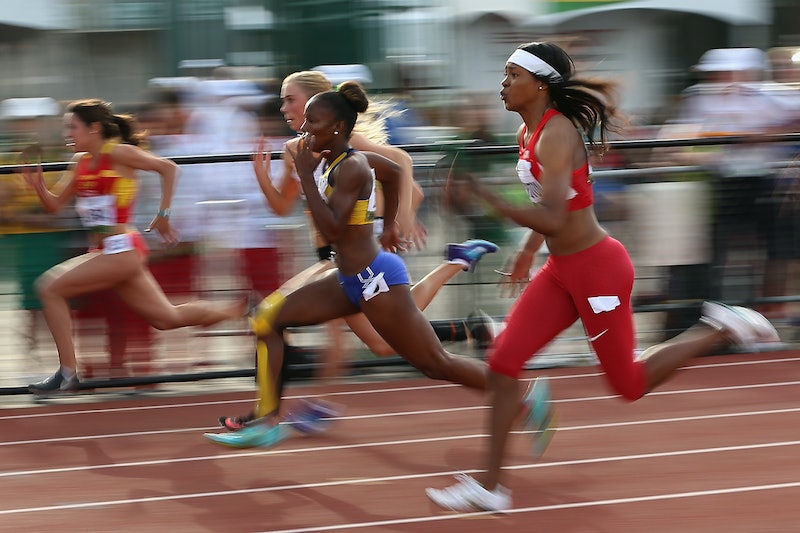 Just days before being slated to represent India in the 2014 Commonwealth Games, sprinter Dutee Chand was informed that she had been disqualified for failing a “gender test.” The test, which measures hormone levels, showed that Chand’s testosterone levels were above the range considered “normal” for female athletes.

In 2012, Chand completed the 100-meter sprint in 11.8 seconds, earning her the title of national champion in the under-18 division.

After marking a career-best time of 23.57 seconds in the 200-meter dash earlier this year, Sports Authority of India officials became suspicious of Chand. After winning two gold medals for India during the 16th Asian Junior Championship last month, SAI officials subjected Chand to the “gender test,” which ultimately ruled her ineligible to compete.

"Preliminary investigations indicate that the athlete is not fit for participation in a female event due to female hyperandrogenism,” SAI said in a press release. “The athlete will still be able to compete in the female category in future if she takes proper medical help and lowers her androgen level to the specified range. We reiterate that these test results do not determine her gender. The test simply tells us that she has excess androgen in her body and is therefore not eligible to compete in the female category."

Ahead of the 2012 London Olympics, the International Olympic Committee released a document outlining the state of these tests. The release, titled “IOC Regulations on Female Hyperandrogenism,” outlines what has reluctantly become an internationally accepted standard after years of testing controversies.

“Nothing in these regulations is intended to make any determination of sex,” the document reads. “Instead, these Regulations are designed to identify circumstances in which a particular athlete will not be eligible (by reason of hormonal characteristics) to participate in 2012 OG Competitions in the female category. In the event that the athlete has been declared ineligible to compete in the female category, the athlete may be eligible to compete as a male athlete, if the athlete qualifies for the male event of the sport.”

Hyperandrogenism is a medical condition in which an excessive amount of testosterone is produced by the body. Oftentimes, hyperandrogenism is the result of polycystic ovary syndrome, though it can also manifest itself as a result of hyperactive adrenal glands or as the result of an intersex condition. It’s estimated that anywhere between five and ten percent of women show some symptoms of polycystic ovary syndrome.

The Times of India does note that if Chand is able to reduce her androgen levels to fall within the normal testing range, she will be allowed to resume international competition. To do this, it is likely that she will have to take antiandrogens like spironolactone, flutamide, or cyproterone acetate.

Gender testing has been a controversial element in international competition, dating back as far as 1950, when Dutch sprinter Foekje Dillema became the first person disqualified as a result of testing positive for a Y-chromosome. As a percentage of women are born with Y-chromosomes, this type of testing has since been replaced by the current — though still controversial — testing of hormone levels.

The odd thing about setting standards designed to eliminate "unfair" — yet natural — advantages is that all athletes have physical advantages over the average person. Chand is a woman who happens to naturally produce more testosterone than the average woman.

If we are to believe that the advantages brought on by Chand's naturally-produced hormones should be reason enough to disqualify her from competing against other women, where does this stop? If a women's basketball player happens to be six inches taller than an arbitrary range of acceptable heights, should she be sent to play against men? Yes, that basketball player may be an outlier, and yes, Chand's testosterone levels may make her an outlier, but isn't that what professional athletes are? Isn't that what makes watching sports so entertaining in the first place? The world's greatest athletes aren't average; they are outliers.

It's unfortunate that Chand, whose body chemistry may predispose her to athletic success, will need to take medication to curb her own gifts, and to return her to the "normal" range. It's unfortunate that in today's world we have yet to realize that normal is subjective; that neither women nor men fall neatly into these arbitrarily-defined boxes of acceptable.

More like this
Footballer Jake Daniels Shared His Thoughts On A World Cup Boycott
By Sam Ramsden
Wimbledon Alters All-White Kit Rule Amid Candid Period Discussions
By Catharina Cheung and Rachel Mantock
Iran Has Issued A Death Sentence Over Mahsa Amini Protests
By Catharina Cheung, Darshita Goyal and Maxine Harrison
How To Switch Back To A Personal Instagram Account From A Professional One
By Alexis Morillo
Get Even More From Bustle — Sign Up For The Newsletter