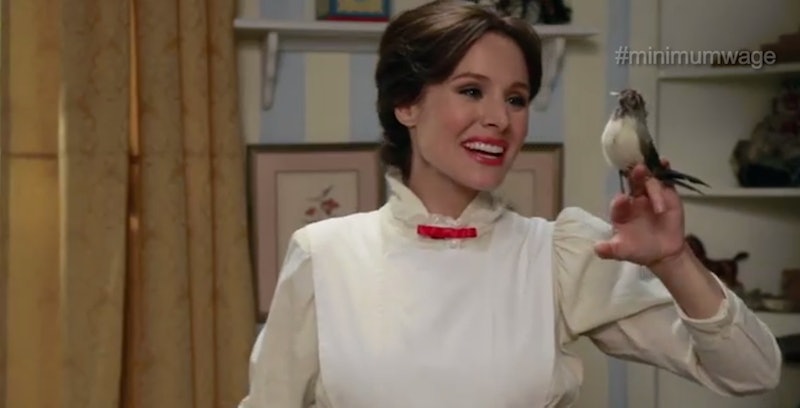 We all knew that Kristen Bell has a great voice thanks to Frozen and her epic live performance of "Do You Want to Build a Snowman?" in LA earlier this year, but this is crazy. In a new skit for Funny or Die , Kristen Bell took on the role of a disgruntled Mary Poppins who is quitting her job as nanny of two rich, spoiled kids because, reality check, this is 2014 and minimum wage is not enough to live on after taxes. Of course, that's the whole point of this skit — but, as Vulture pointed out, it's sort of easy to be distracted from that because, holy sh*t, Kristen Bell's voice is really good. Why isn't this girl on Broadway yet?

For the sake of focusing on the point of the video, though, I guess I should speak a little about that too: The song, set to the tune of "A Spoonful of Sugar" from the actual Mary Poppins film, involves Bell's Mary Poppins singing about how "just a three dollar increase can make a living wage," instead of coaxing children to clean their room by comparing it to taking medicine with a spoonful of sugar. Little cartoon penguins living below the poverty line are involved, too. Walt Disney would be proud (and probably captivated by Bell's voice because, like I said, holy sh*t.)

Check the skit below.