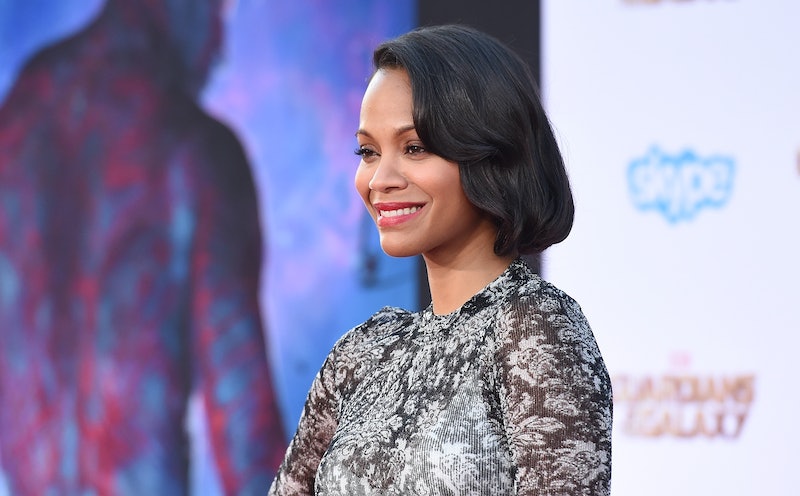 The good news just keeps rolling in for one Guardians of the Galaxy star and her artist husband, because, reportedly, Zoe Saldana and Marco Perego are expecting twins. Yes, apparently Saldana thought announcing her pregnancy was so nice, she opted to do it twice. Or maybe she decided to have two announcements, so each twin would have their own time to shine. That’s always fair when dealing with siblings. Wait. Who am I kidding? Celebs don't announce baby news, sources announce baby news. According to E! News, multiple sources have confirmed that the Saldana is pregnant with twins and the couple is said to be “thrilled” with the prospect.

While we worried yesterday about the Rosemary’s Baby actress’s spawn, the news of twins has me thinking of more sci-fi possibilities because of Saldana’s recent roles in heavy hitting franchises like Avatar, Star Trek — both of which have sequels lined up — and obviously, Gardens of the Galaxy. Twins are big in the sci-fi genre too. Star Wars’ Luke and Leia were twins. Those two kids in Escape to Witch Mountain were twins. Then there were the Borg twins in Star Trek Voyager. I guess it's no surprise that Saldana, sci-fi heroine extraordinaire, is having twins of her own. In looking at Saldana's roles, I have a few theories as to what her two bundles of joy might turn out to be like.

The other can be green and have superhuman strength and healing powers like Saldana's most recent character Gamora from GoTG.

Or one twin can have a knack for languages and will translate Klingon for a future Star Fleet like Uhura on Star Trek.

Then again there's always the chance that one will have an adventurous spirit like Ana Maria from Pirates of the Caribbean. Saldana's husband Perego is known as "The Pirate" after all.

But just as long as one of her twins becomes a sassy ballerina for the fictional American Ballet Company, then I'm happy.

More like this
Meet The Disney Imagineer Bringing 'Guardians Of The Galaxy' To Epcot
By Charlie Mock
Elizabeth Olsen's Chris Evans Friendship Update Was Accidentally Hilarious
By Grace Wehniainen
Hayden Panettiere Will Return For 'Scream 6': "We F*cking Won, Scream Fam"
By Jack Irvin and Jake Viswanath
Danny Boyle Knows Exactly Who He Wants To Be The Next James Bond
By Sam Ramsden
Get Even More From Bustle — Sign Up For The Newsletter