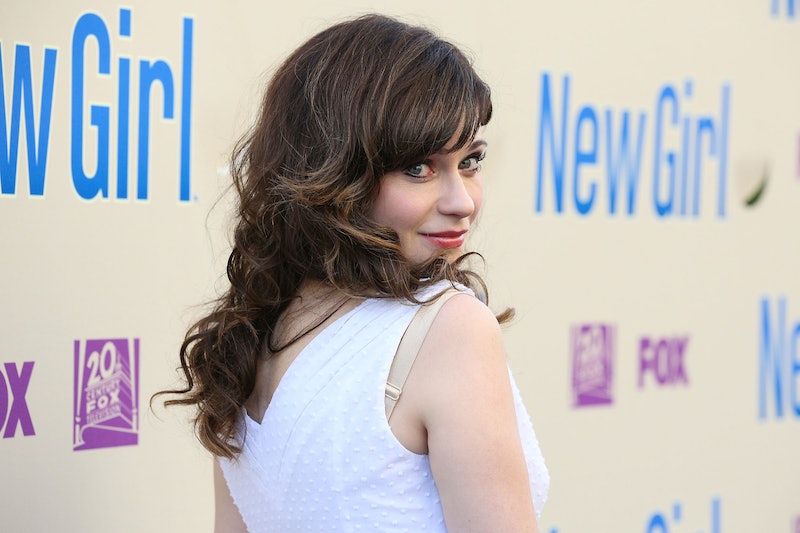 The phrase "Nail Art Is Dead" has been heard all over the blogosphere since the summer of last year, but I'm not ready to believe that yet. After all, some of the best recent nail art can be seen plastered all over Miley Cyrus Instagram, and that girl definitely knows how to DIY. It's not so much that pop culture has kicked nail art to the side. Rather, it may be that every creation possible has already been exhausted by all of us. It gotten to the point where people found any trinket the size of their finger tips and glued it to their nail pronto. And, with that, the whole nail art thing got ridiculous enough that we rejected the whole trend. RIP.

But, there is one girl who has kept the trend alive. Of course, I'm talking about everyone's favorite manic pixie dream girl, Zooey Deschanel. While falling in love with the simple pleasures of creating mini pictures, and adding gems and glitter to her pointers, Deschanel brought nail art to new heights with every red carpet she walked down. Would it be too bold to say she pioneered the trend? During the award show season camera men would be armed and ready to zoom in on her perfectly painted nails against her glamorous gowns. Fans and critics ate this stuff up and it resulted in another delightful trait to add to our already adoring list of reasons we love our dear Zooey.

If you can't recall her most memorable mani's just take a scroll through her Instagram. It's a documentary of all things cute and ladylike, including her impeccable nails. No time for IG stalking? I gotchu — here are 9 of her very best looks.

1. PAINTING US THE FUTURE

In May of last year Zooey Deschanel Instagrammed these nautical cuties. Her equally inspired collaboration with Tommy Hilfiger titled, To Tommy, From Zooey wouldn't come out until the spring of this year. Was she trying to tell us something?

Making nerdy-chic a real thing, she busted out these perfectly painted tuxedos next to her floor-length Prada gown at the 2012 Golden Globe Awards.

She gave a shout out to all wordsmith's when she claimed "Writers: this is for you" after posting this mani in February of 2012.

For Christmas 2011 a festive Zooey gave us the gift of perfect prints when she showed off her latest and greatest art of the season.

She nailed it again with this ultimate homage to the Beatles.

Matching her nails to her personality, Zooey showed us the brighter side of life at the 2012 Critics Choice Awards.

At the 2013 Emmy's she walked the red carpet once again with an impeccable manicure paired this time next to her J Mendel dress.

This nail art won over the hearts of DIY fans all over the world when Zooey instagrammed her film strip and camera nails before heading to the 2013 Golden Globe Awards.

Most recently she shared these perfect petals back in January before jetting off to the Golden Globes again. Next step, this year's Emmy Awards, we will have to wait and see what happens! Keep on keeping on with nail art Zooey, we need you!