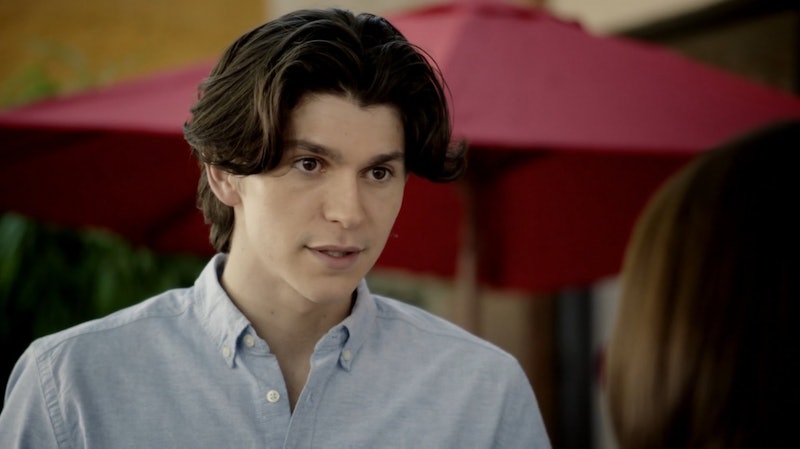 One of the reason that I love the shows that I do are because of characters whom I would give anything to befriend in real life. I would love to sip pink wine with Mindy Lahiri, join in on Orphan Black's Clone Club, and swap clues with Spencer on Pretty Little Liars. My latest television addiction, MTV's Finding Carter , has quite the opposite effect — while I look forward to the hour of entertainment that the characters bring me, I would run far, far away if any of them attempted to befriend me in real life. I've already written about how much Carter sucks as a human being, but I think that I may have overstressed Carter's suckiness while accidentally giving another character way too much credit. Here is me rectifying that situation: Carter is still awful, but no one on this show can be worse than her friend/potential love interest, Gabe.

Let me first say that my issue with Gabe has nothing to do with actor Jesse Henderson, who has great hair, a great smile, and delivers Gabe's suckiness as earnestly and well as one possibly can. While I was willing to give Gabe a free pass for the first few episodes of the series (every character needs to grow on you a little bit), I'm starting to realize now who Gabe actually is (the worst) and I really hope that the show also sees it going forward.

At the beginning of the series, Gabe was Carter's twin sister Taylor's best friend and secret crush. Unfortunately, Gabe developed a crush on Carter pretty much immediately, allegedly blind to Taylor's (really obvious) affection for him. Carter, in what was perhaps the most noble thing she's ever done on this show, told Gabe that they could never be a thing. One, Carter wasn't about to ruin her relationship with Taylor over a boy, and two, Carter really wasn't feeling it anyway.

Now, I get it — Gabe was into Carter, and getting rejected really sucks. I don't fault Gabe for falling for Carter (though I was really confused, considering she's just so mean, but whatever) but I do fault Gabe for essentially everything that happened next. Upon Carter's rejection, Gabe went into full-on "nice guy" mode — he did absolutely anything and everything he could do to please Carter, including pulling a prank on the cops, breaking into his father's computer, and a variety of other illegal things, all in hopes that Carter would see it as evidence that the two of them should be together.

Unfortunately for Gabe, Carter wasn't interested in him as more than a friend. Instead of accepting this, Gabe sulked — but not because he thought that him and Carter had no potential. According to Gabe, he and Carter were "inevitable," exactly the thing you want the guy who you just rejected to say about your future relationship — "don't worry about it, Carter, because we're going to happen no matter how you feel about it."

Gabe decided that he needed to be more strategic about his pursuit of Carter, even discussing his strategy with Ofie like Carter's affection was a particularly challenging task in the Kim Kardashian: Hollywood game. When Carter decided to date "bad boy" Crash (because that's the name of a real person in Finding Carter Land) Gabe saw it an obstacle, not a very large sign that Carter was not interested in him as more than a friend. The pursuit continued, even landing Gabe a quick kiss with Carter — big mistake on Carter's part.

I know that Gabe believes that he's a romantic, actively pursuing the girl he wants to be with, regardless of her rejection of him as a boyfriend — and I think that's part of the problem. Is Gabe supposed to be our romantic hero in this scenario? Gabe, the guy who plans his interactions with Carter around the idea that he can eventually manipulate her emotions into falling for him? Because I'm not really about that life. It'd be like if Noah in The Notebook continued to jump from various carnival rides for years until he got a date with Allie. I mean, come on — eventually, someone needs to just get the hint and move on. Plus, is this really the kind of friend Carter should have? Gabe's pursuit of Carter makes their whole friendship extremely artificial.

Who knows — maybe Carter and Gabe will eventually fall in love and Gabe's persistence will be thought of as "romantic" and "Seth Cohen-y." But until then, I'm going to continue to roll my eyes every time Gabe says the word "inevitable."

More like this
Kaley Cuoco & Tom Pelphrey Just Made Their First Public Appearance As A Couple
By Hugh McIntyre
What Does Michael Peterson’s Family Think Of 'The Staircase'?
By Arya Roshanian
Everything To Know About ‘The Handmaid’s Tale’ Season 5
By Amanda Whiting
'Stranger Things 4' Filmed At A 100-Year-Old Lithuanian Prison
By Kadin Burnett
Get Even More From Bustle — Sign Up For The Newsletter