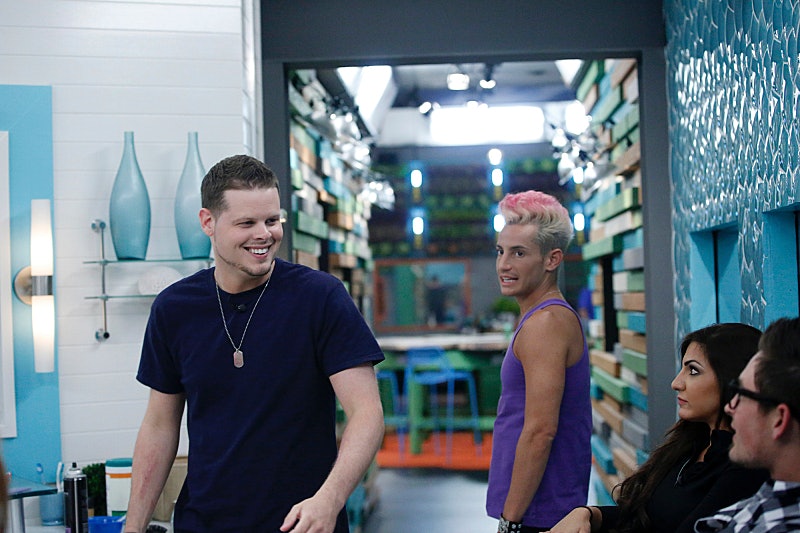 Usually, reality TV competitions are all about doing whatever it takes to get ahead. Big Brother is no different. When there's $500,000 on the line, I think we're all in agreement that anything goes. But once in a while, a houseguest will do something incredibly sweet for another houseguest, and we witnessed just that during Thursday night's Head of Household competition. Derrick threw the competition so Frankie could win HoH yet again this week, but he did it for an amazing reason.

Thursday night's HoH competition was one of those knockout challenges where the houseguest who answers the question correctly eliminates their opponent. When Derrick and Frankie were up, Derrick said, "Frankie, you want to see your grandfather, right?" Frankie's 90-year-old grandfather passed away from his battle with cancer on Tuesday, and Frankie was actually informed of the news, which understandably devastated him.

During the HoH competition, the song that described a past competition from this season played, and Derrick and Frankie were supposed to guess what competition the song referred to. Instead of both eagerly at their buzzers, Derrick stepped back, showing that he was going to let Frankie have this one. Frankie gave the correct answer, and when host Julie Chen announced he would be HoH again this week, Frankie immediately gave Derrick a huge hug.

At the end of the episode, the houseguests gathered 'round for one last word from Chen. She asked Derrick if he threw the competition, which he admitted that he did. Derrick said he wanted Frankie to be able to see photos of his grandfather, to which Frankie seemed immensely grateful. Derrick even seemed emotional after speaking with Chen.

Obviously, that was a lovely gesture from Derrick. As Chen said at the beginning of Thursday night's episode, some things are bigger than Big Brother, and what goes on outside of the house can really put things into perspective. Derrick is a stand-up guy for seeing the emotional state Frankie was in and trying to lift his spirits.

However, as a Big Brother fan, I am of course cynical and skeptical. Derrick does seem like a noble dude, but I can't help but wonder there was a little part of him that wanted to throw the competition just so he didn't have to be HoH again and "get blood on his hands," as seems to be the buzz phrase of this season. Although Frankie has won HoH twice prior to Thursday night's competition, his nominees have lost the Battle of the Block both times, stripping him of his power, so maybe Derrick doesn't see Frankie's HoH reign as a threat anyway. I can't wait to see how this bold move plays out.