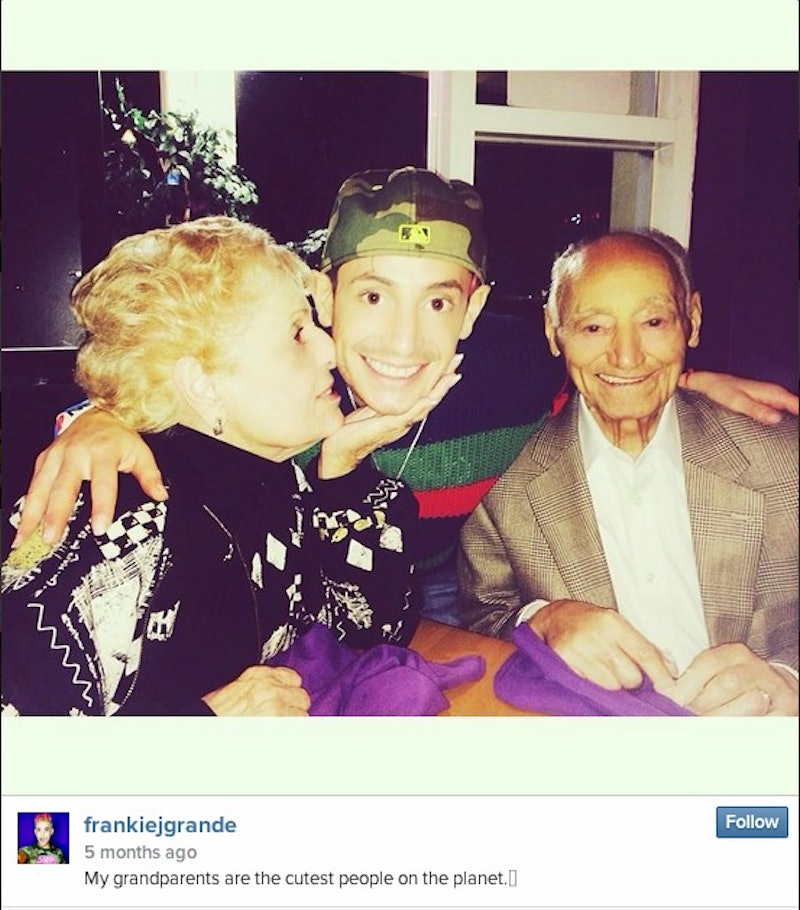 As fans of the famous siblings have likely already heard, Frankie & Ariana Grande's grandfather passed away on Tuesday night, leaving Ariana heartbroken at the loss of a relative she was extremely close to. Frankie was extremely close to his grandfather too, but due to him currently competing on Big Brother , Frankie was not aware of his grandpa's death until Wednesday night. It was not shown during the Wednesday night episode of Big Brother, which would have been grossly insensitive, but as seen on the show's livefeed, producers gave Frankie a letter from his family containing the sad news.

Frankie's family urged him to stay in the competition, telling him that it's what his grandfather would have wanted him to do. In order to pay tribute to him while remaining in the house, Frankie will give a eulogy for him on Wednesday night's Big Brother After Dark, according to Big Brother Updates. He also said that he asked if he could write a blog post or give some sort of explanation for staying in the house, though fans will surely understand Frankie's very personal decision.

So Frankie will remain in the house, and while all of the houseguests on Big Brother are technically competitors, they've also formed friendships, so it's not surprising that they would give Frankie support during this emotional time. Unfortunately, it seems that one houseguest may be using Frankie's current vulnerable state to further his own position in the game.

After being comforted by Victoria, Frankie spoke to Caleb and shared with him the letter from his family. But one comment noticed by Big Brother Network makes it seem like Caleb might find an opportunity to exploit the situation.

As he hugged Caleb, Frankie said that he wanted to be there with him throughout the rest of the game. Perhaps Frankie meant it innocently as he reached out for help from a friend, but could Caleb attempt to use that to strengthen their alliance? Frankie may have been involved in Cody choosing to put Donny on the block instead of Caleb this week, but that seemed to be based entirely on game strategy. Of everyone Frankie has become close with, Caleb doesn't seem to be one of them. But could Caleb keep these words in his back pocket?

I sincerely hope that Caleb merely listened and ignored gameplay, but based on his past behavior, I find it hard to believe. At least, for now, he's merely providing a very big shoulder to cry on.