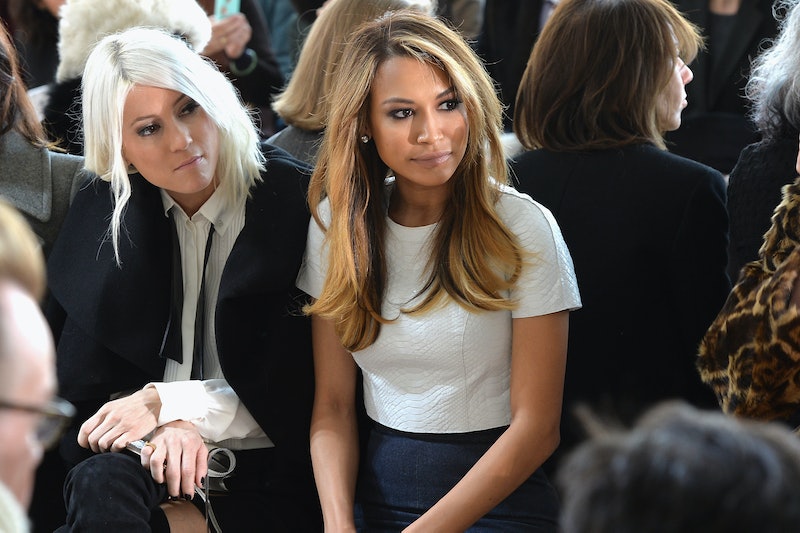 The plot certainly thickens when it comes to Naya Rivera's recent nuptials. In case you missed it, Naya Rivera secretly married Ryan Dorsey on July 19 and didn't reveal it until Wednesday, July 23. This came as a surprise to everyone as most of us had no idea she had been dating anyone since breaking off her engagement with Big Sean in April. Apparently, it wasn't just the fans who got a huge shock from Rivera's surprise wedding. Mail Online reveals that Naya Rivera's father-in-law was shocked by the wedding as well — and that he only met Rivera for the first time a few weeks ago.

Despite the fact that Rivera and Dorsey can only have been dating for a maximum of three months, the two have actually known each other for four years. In that time, it appears that Rivera never once met Dorsey's family. "We knew about the wedding six weeks ago," said Arnold Dorsey, Ryan Dorsey's father. "Still, it was a bit of a shock! ...I met Naya a couple of weeks ago."

Arnold Dorsey was aware of his son's friendship with Rivera and recounted the story of how they met, but the fact that he only met his now daughter-in-law "a couple of weeks ago" and was only told about the wedding "six weeks ago" is bizarre. The more we learn about Rivera's wedding, the more confusing (or just plain weird) the story gets. First, it's revealed that Rivera married Dorsey the same date she'd set for Big Sean and now Dorsey's father is revealing that that the whole wedding thing was just sprung on him a month ago?

The worst case scenario here is that Rivera dated Dorsey for two months and was engaged for one month before getting married. The best case scenario here is, well, Nick Cannon and Mariah Carey made the brief courtship thing work. At the very least, Arnold Dorsey has nothing negative to say about his daughter-in-law. According to him, Rivera is "real down to earth" and she and Dorsey are like "two lovebirds".

Still, with all these weird little details leaking about Rivera's wedding, I can't help but think we're not getting the whole story here. At this point, I've got two strong theories as to how and why this surprise wedding happened.

Dorsey and Rivera have always been in love.

The explanation that the couple is going with is that they're deeply in love and very happy, which I'm inclined to believe based on their wedding pictures alone. However, it's such a quick turnaround from when she was engaged to Big Sean just three months ago that it seems more likely that she and Dorsey have always had feelings for each other that they just never acted on until now. Maybe it was a classic case of being unwilling to risk the friendship until one day things heated up in the best kind of way.

Dorsey and Rivera had a marriage pact.

Okay, hear me out. Maybe Dorsey and Rivera aren't so much in love as they do just simply love each other. It's not uncommon for two friends to make a pact to get married by a certain age, if they haven't found other partners by then. Certainly it's common enough that it's a staple of romantic comedies. Maybe 27 was Rivera's cut off age for the wedding of her dreams and she wasn't going to let a little thing like Big Sean dropping out stop her. Honestly, the more we learn about the lead-up to the wedding, the more likely this is starting to seem to me.