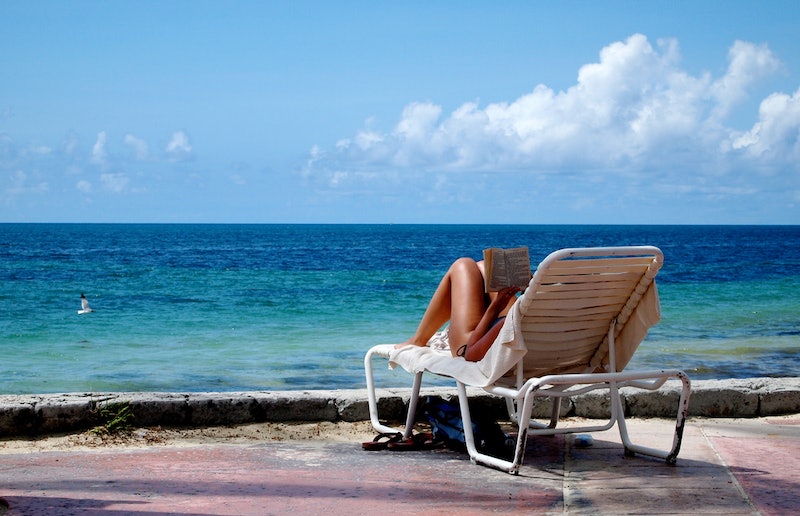 I hope you’re on a beach somewhere sifting sand through your toes, sunbathing on a park bench surrounded by lush greenery, or splashing by the pool with a Popsicle in one hand and a book in the other, soaking up every bit of summer that remains. Because whether or not you’re actually returning to school when this month comes to a close, the end-of-season woes are inevitably approaching. June and July zoomed by, and now you’re thinking: What did I do all summer? Don't worry, though. Bustle has plenty of reading suggestions to keep your last few weeks blissful, productive, and full of literary thrills.

It’s been one epic summer of bookish delights, and even the oft-lagging August is set to keep that groove going. For the overachievers who've already plowed through their book piles mid-vacation, this is great news. For those who've barely put a dent in that ever-growing stack, now’s the time to kick it into gear. August's picks include a brilliant and amusing batch of short stories, and a fierce collection of critical essays; a heartfelt, continent-traversing debut about a wrongfully exiled immigrant; and, of course, Haruki Murakami’s newest addition to his long list of heralded masterpieces. In short: These reads are destined to keep you busy.

After her fierce debut novel, An Untamed State , released in May, the bold, charming and ever-brilliant Roxane Gay presents an explosive set of essays that examines everything important in today’s cultural moment — including the idyllic land of Sweet Valley High, having too much hubris in a Scrabble tournament, and, of course, negative representations of women and sexuality in all forms of media. That's just scratching the surface. In this critical compilation, titled Bad Feminist, Gay masterfully weaves poignant cultural commentary with her own intimate experiences as a woman, writer, lover, and teacher, alternating between the voices of wise critic and vulnerable consumer, of thoughtful academic and comic best friend. (Seriously. At points, you will laugh so hard, your gut will will hurt.)

With wit and insight, she explores an array of topics in her essays, showcasing a vast range of knowledge and writerly skill, while debating with, enlightening, and engaging readers in conversation. What's so special about this collection is its accessibility — Gay is nothing short of a critical genius, yet every essay is approachable and open while still being thorough. Her writing is rare, and at that, not to be missed.

Enter the strange, yet magical world of Marie-Helene Bertino’s 2 A.M. at the Cat’s Pajamas and you’ll quickly be swept away by the spirited tale that unfolds. In this witty debut, Bertino illuminates a glum, gritty Philadelphia with a vibrant cast of characters and the extraordinary events that progress and unite them over the course of a single, snow-covered Christmas Eve eve.

Here sharp-tongued, precocious 9-year-old Madeleine Altimaria, newly motherless, searches the city for a legendary jazz club with dreams of becoming a singing legend; timid schoolteacher Sarina Greene preps for a dinner party with an old flame in attendance; and Lorca, an infamous jazz club owner, struggles to defend his musical haunt against the local law enforcement trying to shut him down. Packed with humor, wit, love, and ambition, Pajamas is a lively tale that sings of life’s beautiful unpredictability and pockets of joy buried beneath the muck.

3. COLORLESS TSUKURU TAZAKI AND HIS YEARS OF PILGRIMAGE BY HARUKI MURAKAMI (KNOPF; AUG. 12)

Haruki Murakami junkies rejoice! With Colorless Tsukurua Tazaki and His Years Pilgrimage, the internationally lauded literary master delivers to his fans yet another gem in which the author illuminates the beautiful strangeness of everyday life.

Straddling the divide between solitude and loneliness, Tsukuru Tazaki has been living a quiet, meager life in Tokyo, satisfying his obsession with train stations as an engineer. But when a conversation with a girl he is dating forces him to delve into a past he has struggled to bury, Tazaki is called to reassess the man he has become and the opportunities he has neglected along the way. It’s a talk that eventually asks him to revisit, mentally and physically, the terrain of his young adult years and the cataclysmic moment when his harmonious friend group of five, tight-knit since high school, alienated Tazaki without explanation. Too fragile at the time, Tazaki never sought out why his four closest friends decided to abandon him, but instead, retreated into the abyss of solitude and became obsessed with death. Now, 16 years later, he plans to find them and uncover the truth.

This surreal, emotive novel is classic Murakami, sending readers into a pensive, dreamlike state as they turn its pages. During its first week on sale in Japan, Colorless Tsukurua Tazaki sold more than 1 million copies — I'm sure it'll land straight on the best-seller list here, too.

4. THE TRUE AND SPLENDID HISTORY OF THE HARRISTOWN SISTERS BY MICHELLE LOVRIC (BLOOMSBURY; AUG. 12)

Michelle Lovric’s latest novel is a story all about hair — specifically long, cascading, floor-length hair. It stars the seven Harristown Sisters, all of whom have decadent heads of hair each in a different vivid shade. Impoverished, fatherless, and coming of age in the mid-1800s in a rural Ireland still suffering in the aftermath of the Great Famine, these seven sisters decide to use their flourishing follicles to change their luck, but with personalities as different as the color of their locks, their heads are bound to butt.

Together they become a talented, traveling celebrity septet, singing, jigging, and flashing their gorgeous, Rapunzel-like gifts to the delight of international admirers. From the dancehalls of Ireland to the lavish stages of Venice, their act will send them on a rollercoaster of wealth and fame, but these sisters will have to overcome their own differences and jealousies too in order to defend themselves against exploitation and obsession.

Rich with historic detail and inspired by the true story of Ireland’s Swiney sisters, Lovric’s imaginative new novel is an enchanting read, filled with adventure alongside lessons about glory, loss, and deceit, about financial hardship, sibling rivalry, and the consequences of celebrity.

The powerful spirit of a tiny Texas town comes to life in René Steinke’s latest novel Friendswood. Equal parts suspenseful and heartbreaking, Steinke weaves a captivating narrative that plays upon the reader’s heart and mind at once.

Lee is a middle-aged mother grieving the loss of her daughter to a mysterious blood disease that may have been caused by a dark substance oozing from the ground in her family’s backyard, one of many homes built on a former industrial site. Years later, when a hurricane devastates the small community of Friendswood and causes more chemical pollutant to surface, Lee becomes increasingly hell-bent on proving her suspicions and preventing an ambitious, local mogul from erecting a new housing development on the site. Told through the alternating perspectives of several residents whose fates will soon intertwine — a teenage girl with troubling visions, a celebrated football star haunted by his own actions, a father trying to outrun his past, and the fiery Lee among them — Friendswood is a piercing novel, which is a testament to the tangled lives we lead, the muddy secrets we keep, and our deep, conflicting layers of humanity.

In this sly debut novel, Jess Row fearlessly explores the many layers of race, exclusion, and commodified identities. These provocative themes, bravely tackled, are spooled within a strange yet intriguing narrative about two old friends, each experiencing their own form of identity crisis.

It’s been almost 20 years since their teenage days when Kelly Thorndike and Martin were members of the same high school rock band, before Martin fled Baltimore and all but disappeared from Kelly’s life; until one day, recently returned to his hometown, Kelly bumps into Martin on the street, but he isn’t the Martin he remembers. Teenage Martin was white and Jewish. This man, though he shares many of the same facial characteristics, is African-American. Martin soon explains that he has had intensive plastic surgery, altering his skin, hair, and physiognomy to make him appear African-American. He is on a mission to sell racial reassignment surgery to the world, to normalize the procedure, he explains, and he wants Kelly’s help. Shocked and hesitant at first, Kelly, who is still grieving the recent loss of his wife and daughter in a fatal car accident, eventually agrees to aid Martin in his mission and in so doing, unleashes an identity crisis of his own.

Race is a charged subject few white male writers would dare to take on, and yet Row does with a captivating premise, brilliantly executed. Your Face in Mine is, above all, brave and thought-provoking.

7. THE INVENTION OF EXILE BY VANESSA MANKO (PENGUIN PRESS; AUG. 18)

This fiction debut by Vanessa Manko makes for a magical summer read that explores the true meaning of exile through one man’s long-distance, cross-continent relationship with his wife, family, and country. Austin Voronkov is a skilled engineer living in Bridgeport, Connecticut, to which he emigrated from Russia in 1913. He falls in love, marries, has three children and, for the most part, lives comfortably in the quaint New England city he now calls home. That is, until the first wave of the Red Scare hits. Wrongfully accused of participating in anarchist activities, Austin is forcibly exiled and returns to Russia with his new family. Soon, though, the turmoil of the civil war in Russia forces them to flee yet again, this time to Mexico City.

While Austin remains indefinitely marooned in Mexico, his family returns to the United States, and Austin is left with only the small hope that one day soon his engineering designs will earn him patents and a way back into his American home. In the meantime, he attempts to preserve his relationships with his wife and children from afar via daily correspondence as he struggles desperately to earn American citizenship. Home and history are inevitably intertwined in this deeply affecting tale about statelessness and longing, paranoia and isolation, and a love and desire that transcends borders.

In this new, compulsively readable collection of short stories, Justin Taylor delivers a series of intimate snapshots that expertly capture the layered lives of men and women of diverse ages and temperaments. Taylor paints a close-knit group of college friends that disperses and rejoins in unexpected ways; a pair of engaged creatives struggling against writer's block to complete their dissertations amid an unsettling secret between them. Packed with stylish prose and keen insight, the author's stories take readers on brief, yet engaging emotional journeys across varied geography, all the while sifting to the surface stories of love, loss, identity, ambition, and uncertain futures, with characters that linger off the page.

Charming and contemplative, Flings is the perfect summer travel companion, a neatly wrapped package of stories told with commanding wit and an incisive voice that readers will embrace and applaud.