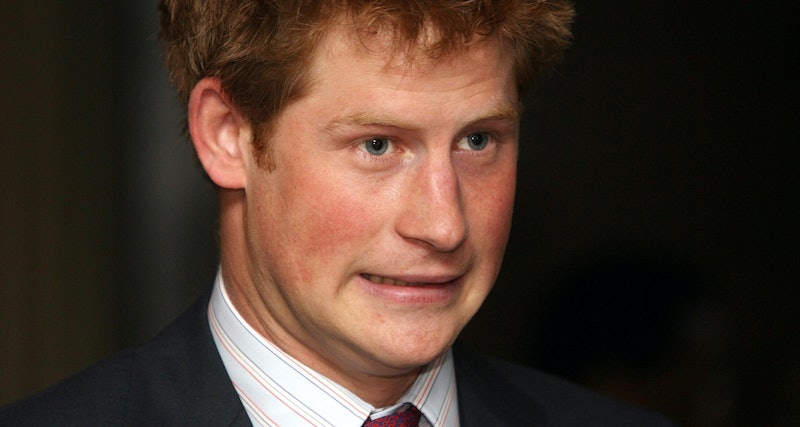 Now that Prince George's first birthday has come and gone, the royal family is looking ahead to the next celebration. Prince Harry's birthday is on September 15 and details about his party are already being leaked. Apparently, Prince William and Kate Middleton are planning Prince Harry's party and they've got a quiet, "grown-up affair" in mind for him. Prince William and Middleton are hosting a dinner party at Kensington Palace in honor of Prince Harry's birthday and, although Prince Harry will spare some time to visit best friend Guy Pelly's nightclub, he's under strict instructions to leave at 10:30 p.m.

I'm sorry to be that person, but that's their party for the 30-year-old twerking prince? According to Vanity Fair's source, Prince Harry is trying not to do anything that would take attention off of the Invictus Games in September even though he would like to go out. As noble as that sounds, it's hard to imagine Prince Harry's birthday being a proper celebration if he doesn't get to party. I mean, he parties all the time even when it's not his birthday. And what 30-year-old man has a curfew? The Invictus Games already feel overshadowed by the injustice of what sounds like the most boring birthday party ever.

I don't mean to criticize Prince William and Kate Middleton, but if they really want to make sure that Prince Harry has a happy birthday then they are going to have to step up their party planning game. Here are a few ideas for how they can spice up Prince Harry's party so it won't put anyone to sleep.

Katy Perry's music video for "Birthday" was a lot of things but creative was definitely one of them. In it, Perry dresses up in a variety of costumes to crash people's birthday parties. Imagine how thrilled the people of England would be if Prince Harry went around crashing their birthday parties in lieu of having one of his own. It would be great for national morale.

This would be more of a present to the world than to Prince Harry, but if the Oscars can tweet a selfie then surely the royal family can tweet a selfie. Just imagine Prince Harry, Prince William, Kate Middleton, Prince George, and Queen Elizabeth all squeezed togther on one side of the dinner table and grinning wide with the hashtag #royalbirthdaydinner. Now imagine how quickly that would trend. I'm sure Prince Harry would get a laugh out of it, if he didn't hate Twitter.

Why even bother to celebrate his birthday in Kensington Palace at all? Prince William, Prince Harry, and Kate Middleton are royalty. If they want to skip town for a while and go to any one of the thousands of popular vacation spots around the world for Prince Harry's birthday, then who is going to tell them no? If they're looking for vacation spots, my guest room gets rave reviews. Just saying.

This seems like it's more in line with what Prince Harry will actually wish he was doing. Guy Pelly invited him to a nightclub and I'm sure Prince Harry would love to stay there until the sun comes up. Having a curfew on his birthday? Come on, that's just not right. Besides, leaving so early could cause him to miss out on the opportunity to find his next girlfriend among the nightclub visitors.

Have a Musical Guest

The Queen of England is proving herself to be quite the Game of Thrones fan these days, to the point that the Queen's Guard performed the GOT theme song in front of Buckingham Palace. If they can do that, surely they can at least fly in a musical guest to perform at Prince Harry's birthday dinner. I'm thinking someone with style, flair, and showmanship. I'm thinking Beyoncé. Beyoncé spices up any birthday party, I guarantee it.