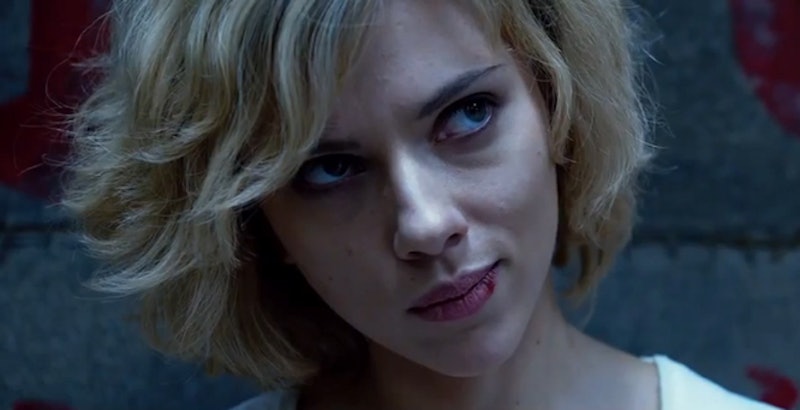 We all know smart people. You know, the ones who can figure out how to split a bill six ways including tip without a calculator. But, in the scheme of things you realize that they're actually not so impressive because there are true intellects in the world. There are scholars, and rarely, there are geniuses. Yes, geniuses. No, not the kind of genius that you cheated off of in your high school trigonometry class. He wasn't a genius, he just studied while you were out saran wrapping people's cars and yelling at your mom for ruining your life. I'm talking super brain-powered people who can lift things with their mind and then tell you what day your birthday is going to fall on in 30 years. For instance, Scarlett Johansson in her latest flick Lucy , in which she plays the title character who can literally use 100 percent of her brain power while normal humans are only said to access 10 percent of it. I know people who access even less, but ... whatever. The real question here is does Lucy rank among other known and beloved movie geniuses? And, better yet, whose ability would be most desirable and practical in real life?

Let's get this out of the way... Worst movie poster, ever. That aside, Travolta's trip into the world of geniuses is decidedly less cool and a whole lot more sad. While he can absorb information like books and facts in record time and has telepathic abilities, he learns it's because of an awful and deadly brain tumor. So, no matter how fascinating the skill that tumor afforded him, I think we can probably all agree it isn't worth it.

Excuse me, but while I imagine giving birth to a baby genius would be a fulfilling and proud moment, once you actually get a talking newborn in your arms you'd probably want to reconsider. Because that shit is creeeeee-py. So, sorry genius babies. While you leave me in awe of your mental prowess, I'm:

2. Uncertain if you were already born with glasses on

First things first, I've seen this movie more times than I care to admit. While Wolfgang Amadeus Mozart never ceases to amaze me in his infinite talent and unparalleled skill, I don't know how much it'd actually help me in life. While I'd love to write a beautiful symphony and all, I would probably rather be able to read someone's mind. Just sayin'.

Is it really fair to look like Bradley Cooper and then be able to have 100 percent brain power? The answer is definitely, no, but hey life isn't fair, SO GET OVER IT. In this movie Cooper's character, Eddie Morra, is trying to get over his writing slump and is able to become a genius through the help of a pill which is super convenient. A pill would probably be the best and closest chance I'll ever get to being a genius so this is definitely high on my list. But while I could definitely get a solid job at JP Morgan or Goldman Sachs with my newfound smarts, there's the whole thing where assassins are after him. ... I'm not sure if it's worth it.

Considering this story, like Amadeus, is based on an actual genius, I'll first and foremost say that John Nash leaves me in awe. Not only is he a brilliant mathematician, but he actually trains his mind to recognize his schizophrenic imaginings. Truly amazing. And, his mathematical abilities really would've been helpful when taking my SAT's. Just being practical.

Lots of math-oriented geniuses on this list. See how little society values the written word?! I digress, but Rain Man, a savant, is still impressive. While he undoubtedly also faces a lot of hardships, his intellect would come in handy while on a game show. And I love game shows. Sue me.

Getting hit by lightening while in the womb is definitely one of the most bad ass ways to become a genius, and apparently, also makes you the most well-rounded kind of genius as well. While poor Powder was forced into a reclusive life, he also took that time to learn from reading an exponential amount of books (rock on), and he can also read people's minds and speak to them through telepathy. The one downside to Powder's genius is that he messes with electrical devices so like, no Twitter when you're hanging out with him. But all in all, Powder is one of the best geniuses on this list. I know I'd like to read a few people's minds myself.

He's a mutant. So what. He can still control minds and read them, plus he's able to run a school full of unruly adolescents and some immature adults. All I'm saying is, I'd really like this power to convince my friends to go to the bar I want to go to for Happy Hour. Does that make me selfish?

Yes, another mathematical genius. They seem a little too common at this point, no? The real juice for me in Will Hunting's abilities is his eidetic memory, which enables him to "recall images in great detail for several minutes." (Thanks, Wikipedia!). Basically, this would be a great skill to have when I'm arguing with someone and I want to prove to them that they're wrong with definitive proof and confidence. Don't remember when you said you loved that sushi place you insist we can't go to? Well, I DO.

Now this is a genius ability I can get behind. Also, finally, a GIRL on the list (other than Lucy, of course). And yeah, Matilda isn't going to find the cure for cancer or anything, but she can move objects and scares the bejeezus out of grown adults with that marvelous brain of hers and that's still pretty damn cool. All I know is, once I'm nestled on my couch in my blanket watching reruns of Glee, I'd love to be able to summon my remote on the distant table so I can adjust the volume.

So, to sum it up: laziness always takes precedence. A+ to Matilda for having the most practical genius ability.