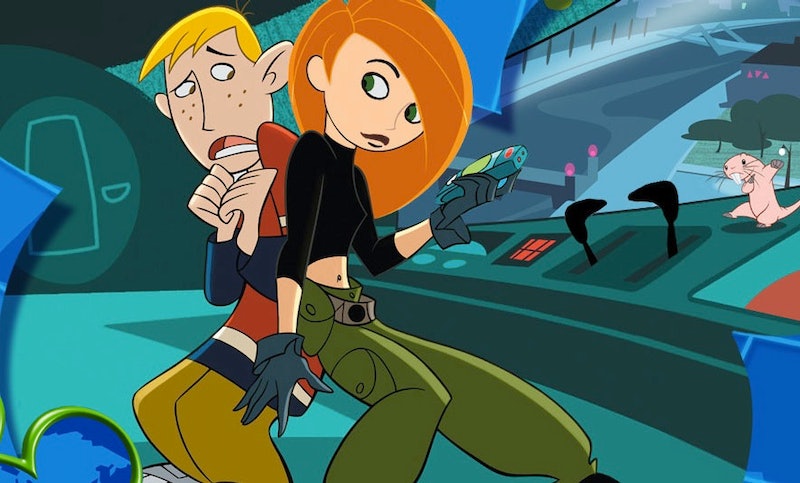 I've made no secret of the fact that I am very proud to be a child of the '90s and '00s. From music to movies to television shows, I have a huge nostalgia filter on when it comes to reflecting on the things that defined my generation. (Except the grunge look. Never will I look at '90s fashion and not cringe.) I've analyzed '90s and '00s movies that were anti-feminist and songs from the early '00s that were totally sexist and now it's time to cast a critical eye at television. Admittedly, that might be a little too easy, but specifically, it felt like time to target television shows aimed toward children.

Like many children of the '90s, I grew up splitting my time between the Disney Channel and Nickelodeon. Hell, I would be the first to sign a petition to bring Pepper Ann or Clarissa Explains It All back. I didn't realize it then, but these cartoons and live action shows were my models for the kind of person I wanted to be and the kind of life I wanted to live. And I definitely didn't realize it then, but those same cartoons and live actions shows weren't always sending me the best messages. In fact, some of them were pushing some anti-feminist propaganda on me in the guise of entertainment and I am calling them out on it right now. Thanks for the childhood, Nickelodeon and Disney, but you've got some splainin' to do.

Hercules was on the list of Disney movies that got a spin-off cartoon series and one episode stands out as particularly sexist. In "Hercules and the Dream Date," Hercules gets the bright idea to make his own perfect girl. He asks the goddess Aphrodite to make her gorgeous and crazy for him and she gives him a hot girlfriend named Galatea, who was crazy toward anything and anyone else Hercules paid attention to. Later on, Hercules tries to fix this by making Galatea an independent woman — which apparently means she promptly "friend zones" him and runs off to date Ajax, instead. I'm not sure what the creators of Hercules were trying to say about women (or about Hercules), but they could have handled that lesson a lot better.

The Angry Beavers was a Nickelodeon cartoon that followed the adventures of two beaver brothers named Norbert and Daggett as they did beaver-type things. The most significant female character was Norbert's girlfriend Treeflower, who hooked up with Norbert in the same episode that she appeared in. She didn't have much to do with, or on, the show unless it revolved around Norbert and her relationship with Norbert. One episode even lampshaded that Treeflower was only whatever Norbert needed her to be, with an answering machine message of hers that said, "Treeflower is off on another exciting adventure where she'll change her career and personality one more time."

Admittedly, anyone who ever watched The Emperor's New Groove already knew that Kuzco wasn't exactly famous for his extreme sensitivity toward other people. The Emperor's New School returned him to the personality he had at the start of the movie, which means that the main female character, the intelligent and popular Malina, was noteworthy for being a "hottie hot hottie" that Kuzco would spend every episode featuring her trying to date. Malina has more depth and focus on her than most love interests, but the fact that "love interest" basically sums up her whole role on the show in one phrase is really sexist.

Invader Zim's three main characters were all male, which should have been our first clue that something wasn't quite right in feminism land. The most significant female on the show is Gaz, the sister of the paranoid conspiracy theorist Dib, and Gaz had a point in her column for being the only person on a particularly stupid earth aside from Dib who is fully aware that Zim is an alien bent on world domination. However, unlike Dib, Gaz could honestly care less and would much rather be playing video games and violently assaulting anyone who tries to keep her from said video games. Despite being noted as stronger and smarter than Dib, Gaz is somehow not the main character of the show. Why is that, exactly?

Danny Phantom is an example of how positive discrimination can hurt just as much as regular discrimination. Let's talk about Sam Manson. Sam was Danny's best friend and sort-of-crush, in that best-friends-who-won't-admit-they-like-each-other sort of way. In the early seasons, Sam was equal to the boys in every way with her own flaws and weaknesses that rounded her out. As the seasons went by, suddenly Danny and Tucker were dumbed down to make Sam look even better, faster, stronger, and smarter than they were and any flaws that she had were erased or waved away. Listen, guys, feminism means men and women being equal not women being put up on a pedestal, OK? Thank you.

Kenan & Kel is another show whose feminist themes really suffer from having two males as the lead characters. Because the show was about Kenan & Kel, any women featured — aside from Kenan's mother — were featured in the terms of whether Kenan or Kel were crushing on them at the time. The only girl who stood apart from the Girl of the Week formula was Kyra, Kenan's younger sister, and her main character trait was her undying and obsessive crush on Kel, which disgusted and alarmed him at various points during the season. They treated Kyra more like a parasite than a person and while that was understandable considering her grating personality, it was really sexist.

Kim Possible was almost the perfect show. In fact, it makes me upset to have to put it on this list of all. The entire premise was based around Kim, a pretty popular cheerleader and straight-A student who "can do anything." Her sidekick and best friend, Ron Stoppable, was her perfect balance and they were equal in every way that counted. At least, until the final seasons. How did Kim Possible end? Kim became a damsel in distress on the show named after her and Ron came into his own as a person by saving the cheerleader and then saving the world. Four great seasons and then you knock Kim out in the finale so Ron can take center stage? Sorry, Kim Possible, but she deserved better.

More like this
Jesse Tyler Ferguson Had A Funny Run-In With A Fellow ‘Modern Family’ Alum
By Grace Wehniainen
“The Door Is Always Open” For Another 'Breaking Bad' Spin-Off, Says AMC Boss
By El Hunt
Lizzo Proved She’s Team Jeremiah During Her ‘The Summer I Turned Pretty’ Review
By Grace Wehniainen
'The Summer I Turned Pretty' Using “Cruel Summer” Has Twitter Begging Taylor Swift To Release A Music Video
By Radhika Menon
Get Even More From Bustle — Sign Up For The Newsletter