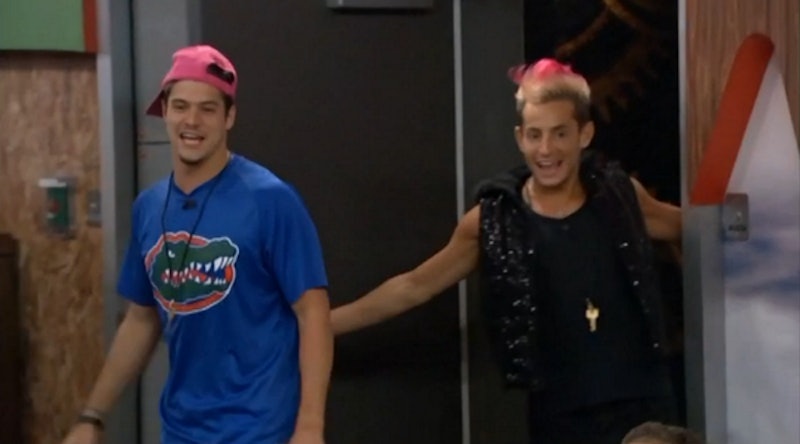 One of the most compelling reasons to sign up for the CBS Big Brother live feeds is to catch all of those little Zach Rance and Frankie Grande moments that have the audience waving their "Zankie" flags high. Of all the bromances and showmances going on in the Big Brother house right now, Zach and Frankie's is the most adorable and the most frustrating. They seem to spend most of their time constantly on the precipice between friends and lovers without ever tipping too far into one area. They've kissed more times than canon showmance Hayden Voss and Nicole Franzel have, but never on the lips. Entertainment Weekly did the world a favor by asking host Julie Chen if any of Zach and Frankie's bromance moments would ever make it onto the CBS broadcast and Julie Chen was suspiciously vague about Zankie in her answer.

"The chemistry between Frankie and Zach is wonderful to watch. It’s like no other bromance we’ve seen. It’s part Will and Boogie and yet at times you wonder if it could turn into a showmance," said Chen, basically summing up what all of us have been thinking since day one. "Frankie is extremely likable. He’s funny, smart and adorable. Zach is a character. He’s outspoken, bold, funny, good looking and enjoys being a bit obnoxious. Together they are very watchable."

Note how this does not actually answer the question of whether or not Zach and Frankie's romance will ever be on TV. At this point, if you only watch Big Brother on CBS and don't keep up with either the live feeds or the recaps, then Zankie would make absolutely no sense to you. Aside from the one scene where Zach and Frankie dubbed themselves "Zrankie", they haven't spent anywhere near as much one-on-one time with each other on CBS as they constantly do on the live feeds. Honestly, it's like Zach and Frankie can't be in the same room for five seconds without touching and none of that is reflected on the show.

Chen identifying their relationship as a bromance with potential is the most accurate and diplomatic thing that she can possibly say about it at this time (especially considering that Zach does identify as straight), but if they are so watchable then why can't we watch them? Is there some kind of conspiracy to keep Zankie off our airwaves? What is going on? I've got some theories.

They're going to give Zankie their own episode.

My first theory is also my biggest dream. Maybe the reason we haven't seen much of Zach and Frankie's relationship is because they're saving it for some kind of big episode. So far, we've seen Big Brother visit Donny's family to find out if he's really a groundskeeper and visit Nicole's family to find out what they think of her relationship with Hayden. What if we're going to get some kind of Zankie montage to accompany a Big Brother visit to Zach or Frankie's families? Fingers crossed.

Zankie is the only reason people sign up for the live feeds.

Alternatively, maybe the reason we never see Zankie on the airwaves is because keeping it on the live feeds is the main incentive for people to pay to watch the live feeds. After all, spending money to watch people 24 hours that you're going to see three times a week anyway is something that only devoted Big Brother fans would do. But if you're missing out on an entire showmance with such a huge fan following because you're not signed up for the live feeds, you'd definitely consider it.

They're waiting until Zankie actually hooks up.

CBS could be playing the waiting game just like we are. After all, there are only so many times they can show the same shots of Frankie and Zach hugging or cuddling or holding each other or kissing each other on the cheek in variations of the same brightly colored outfits before it gets repetitive. They could be waiting for some significant step to be taken in Frankie and Zach's relationship before they give it spotlight again, whether that's a hook up or one of them getting sent home.

Julie Chen is just trolling us.

Julie Chen is the snark queen of Big Brother. Immediately following this interview, she probably went home whistling with a smile on her face to get on Tumblr and Twitter and watch the Zankie fans lose their minds trying to figure out what she meant and then deciding that it doesn't matter because ZANKIE! Well played, Julie Chen. Well played.