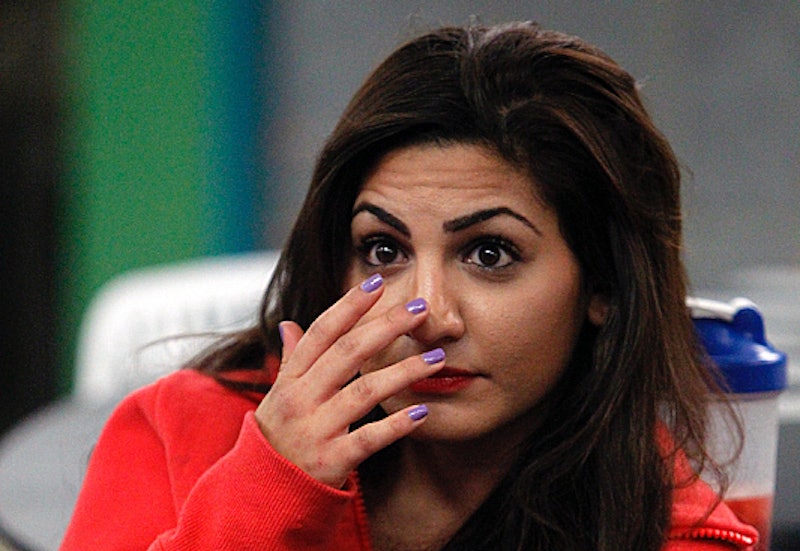 So far in the Big Brother competition, we've lost Joey, Paola, Devin, and Brittany, in that order. Some evictions were a lot more exciting than others. In fact, I would say that Devin's eviction is the only one that probably caused mass partying in the streets rather than a sense of resignation in some, indifference in others, and sadness in those who were fans of that particular guest. This week saw power couple Zach Rance and Frankie Grande become the HoHs of the week. Frankie gained the honor when Derrick threw the HoH competition so that Frankie could get pictures of his grandfather who passed away and Zach beat out Christine for the other spot.

Who did Zach and Frankie nominate for eviction? According to BB Updates, Frankie nominated Victoria and Jocasta and Zach nominated Christine and Nicole. The road to get there certainly wasn't easy. Zach, in particular, struggled with the decision of who to put up on the block because no one was willing to be a pawn this week. He tried to convince Christine and Nicole to be nominated and then throw it and went around to talk to everyone in the house regarding his choices, changing his mind several times. Honestly, we hadn't seen that much anguish over an eviction decision since Cody cried after nominating Donny on Frankie's suggestion.

It might come as a surprise that Zach named Christine after all. Despite the fact that Christine is a member of Zach's alliance, The Detonators, he has repeatedly talked about putting her up for eviction on the feeds because he feels like the Detonators are carrying her through this competition and she's not contributing anything to the team. Frankie and Derrick tried to talk Zach out of nominating someone from his own alliance the second he had power after joining it, but apparently Zach's grudge against Christine was just too strong. And, apparently, some major drama went down at the nomination ceremony because it ended in tears.

This isn't the first time that the HoHs have nominated all girls for the block. It seems that the girls in the house still aren't being well-respected as players because they continue to be used as pawns for the guys. The fact that three of the four house guests to be evicted so far were women isn't a coincidence. Pretty soon, the house will be down to only male guests if the girls don't rally themselves soon. Both Joey and Amber have made attempts to solidify some sort of all-girl alliance and Joey's attempt got her sent home, so maybe that's why the girls are still so hesitant to work with each other.

The ultimate game plan is to backdoor either Caleb or Amber this week and the house guests keep going back and forth on who is the bigger threat. Personally, I'm hoping that they choose to backdoor Caleb for the sheer fact that Caleb's obsession with Amber has been ruining her game, but Frankie has repeatedly pointed out that Caleb has been more loyal to the alliance than Amber has. In all likelihood, Amber's going to be the one pushed out the door in keeping with the uncomfortably sexist tint to this season of Big Brother.

Since the guests can't even decide which of the two has the bigger target on their back this week, there could be a chance that the votes might be split for the first time since the season started. Generally, the house guests tend to vote the same, forcing CBS to engage in a bit of misdirection in order to provide any suspense for these voting ceremonies. However, who ultimately ends up getting backdoored is a fantastic mystery for fans to wonder for the rest of the week.

More like this
How Reality TV Stars Conquered Your Bookshelves
By Anna Peele
Ash & Taylor From ‘Temptation Island’ Might Have Already Flamed Out
By Kadin Burnett
Kylie Jenner Roasts Kendall For Her Cucumber Cutting Skills On TikTok
By Jake Viswanath
What’s New On Netflix: 'Stranger Things' & 'Somebody Feed Phil' Return
By Arya Roshanian
Get Even More From Bustle — Sign Up For The Newsletter