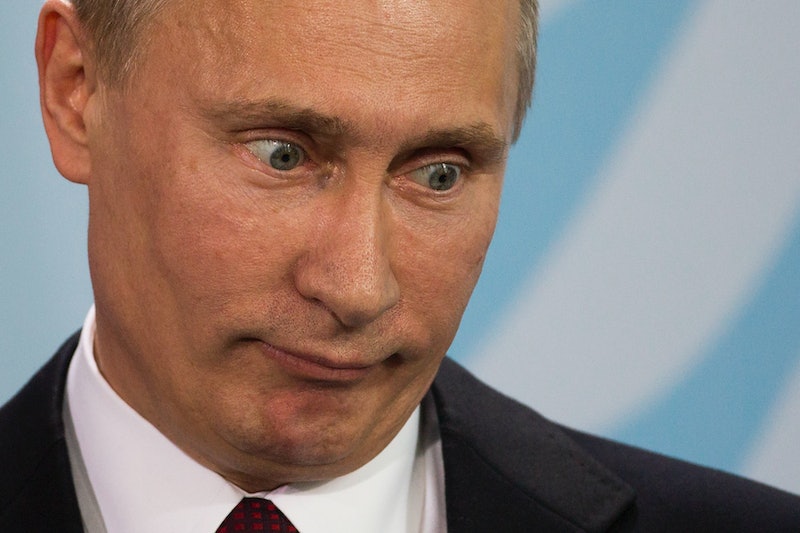 Quick, someone tell Russian President Vladimir Putin the Israeli-Palestinian conflict doesn't need his help, because it seems like he's not getting the message. The architect of Russia's annexation of Crimea and destabilization of Ukraine, which likely led to the deaths of nearly 200 people aboard Malaysia Airlines Flight 17 last week, thinks his advice could really be useful.

That's right: The head of Russia, which according to U.S. and Ukrainian officials has recently been allowing increasing rocket attacks on Ukrainian forces along its border, believes he is the guy who can really stem the deadly trading of rockets between Israel and Gaza right now.

According to RIA Novosti, a state-owned Russian news service, Putin offered his help to Israel's Prime Minister Benjamin Netanyahu on Friday. RIA said Putin was more than happy to lend a hand in the conflict, citing a statement from the Russian government:

The Russian president stressed that continued military action in the Gaza Strip is leading to a dramatic deterioration of the humanitarian situation, to deaths and suffering of civilians. He reaffirmed Russia’s readiness to assist in mediation efforts and the implementation of peaceful initiatives, including in the framework of the United Nations.

Putin also recently met with Iranian President Hassan Rouhani to talk about the need for a ceasefire between Israel and Gaza. The two spoke the day after MH17 crashed, according to the U.S.-owned Radio Free Europe. According to a statement from the Kremlin cited by Reuters, they talked about the "sharp escalation of the crisis."

Both sides stressed the need for a speedy end to the armed conflict and the resumption of direct Israeli-Palestinian negotiations.

Meanwhile, The Jerusalem Post reported on Friday that residents of Ashkelon, an Israeli city reportedly targeted by Gazan rockets, were not happy with how Benjamin Netanyahu was handling the crisis — because he hasn't been intense enough. Instead, they praise Israel's Foreign Minister Avigdor Liberman, a hard-line politician born in the then-Soviet Union who once floated the idea of making all Arab citizens of Israel sign an oath of loyalty, according to The New York Times.

A resident of Ashkelon, Eddy Barzilai, told The Jerusalem Post that Netanyahu is "garbage."

We are letting (the Palestinians) dictate our lives and yet he agrees to this ceasefire, it’s simply weakness. We need a Putin figure.