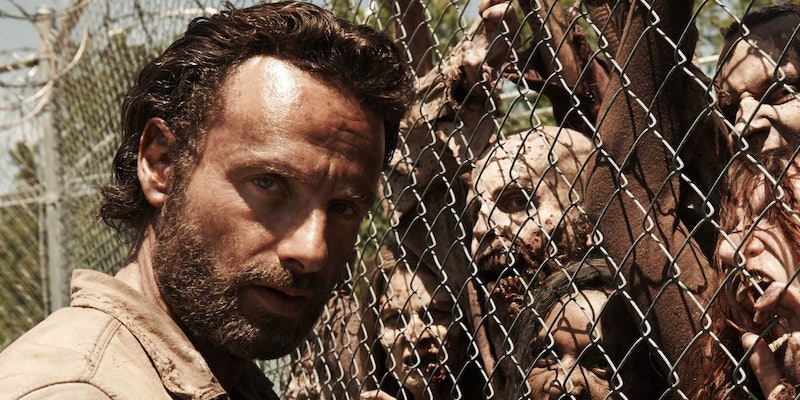 All summer, fans of AMC's hit zombie series The Walking Dead have been impatiently awaiting the premiere of Season 5. Now thanks, to San Diego Comic-Con we not only finally have an exact premiere date, Oct. 12, but a new character to look forward to. At The Walking Dead's panel, producer David Alpert confirmed that Seth Gilliam will play Father Gabriel, a significant character from the comic series.

In the comics, Father Gabriel is a reverend who barricaded himself in his church when the zombie outbreak first started. It sounds like a smart plan, but a major component of the character is the guilt he feels for turning away others who needed his help. Instead of letting them into his haven, Father Gabriel kept the doors shut and heard as others were killed outside.

Fans have been speculating on whether this is who Gilliam would be playing, thanks to photos leaked from the set of Season 5, and now we finally know for sure. Of course, that doesn't mean we know anything else, like Father Gabriel will eventually meet up with Rick's group or if he's involved in whatever the hell is going on at Terminus.

One popular theory is that Father Gabriel is the person who took Beth when she and Daryl were fleeing a walker-infested house. Observant viewers noticed what looked like a cross in the back of the car that Beth was put in, which would point to Father Gabriel as the driver.

But don't get too worried, Father Gabriel is a good guy in The Walking Dead comics, and though there have been plenty of differences between the comic and TV series, it's unlikely that they would go so far as to make an ally into a villain. So whether he's with Beth, waiting in Terminus, or part of a storyline we have yet to see, at least fans can be pretty sure that somewhere along the way, Father Gabriel will help the characters we've been rooting for.