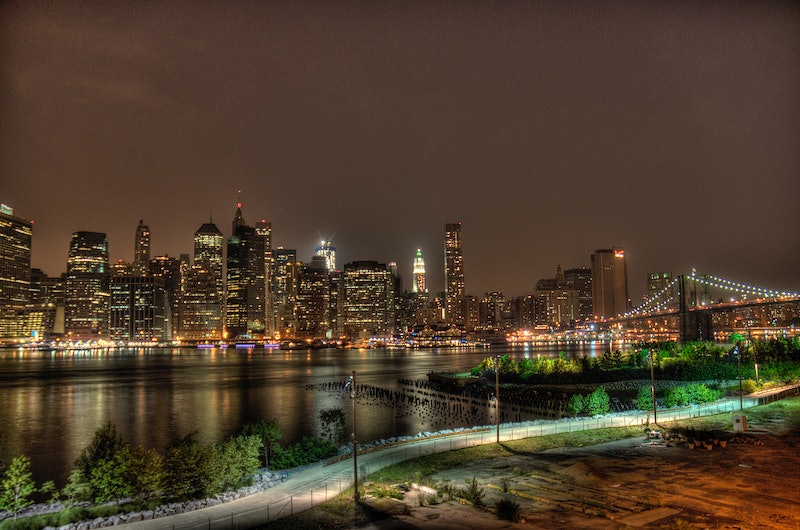 New York City is unlike any other place in the world. Love it or hate it (or both, as the case may be), the people, places, and even smells are totally one of a kind. So when an author uses the Big Apple as a setting for a book, it’s usually for good reason. It was no accident that J.D. Salinger set The Catcher in the Rye in Manhattan, and I think we can all agree that A Tree Grows in Brooklyn would never have worked as A Tree Grows in Paris.

Although the city has changed over time — the horse-drawn carriages of The Age of Innocence, for example, are now (mostly) a thing of the past — many aspects have managed to stay the same. For starters, a Greenwich Village brownstone is still out of most people's price range. But more importantly, the city’s unmistakable atmosphere remains: the hippie spirit of the 1960s lingers in Washington Square Park, the immigrant sensibility of the turn of the century is felt everywhere from delicatessens to upscale restaurants, and the glamor of the Jazz Age survives in iconic buildings like the Plaza Hotel.

The books on this list were written at various times throughout the city’s history, but they all contain those quintessential, only-in-NYC moments that make New Yorkers feel all mushy and sentimental, and make everyone else want to hop on a plane and come for visit. (Read on at your own risk; we are not responsible for any impulse ticket-purchases that may result.)

1. Juleps and jealousy at the Plaza Hotel in The Great Gatsby

On a summer afternoon in the 1920s, the main characters’ search for entertainment leads them to the iconic Plaza Hotel, where they engage a suite as a means to escape from the heat and drink mint juleps (because why not?). The glamorous setting, however, does nothing to prevent Daisy, Tom, and Gatsby from devolving into a vicious series of accusations and arguments that ends with a long, disastrous drive back to Long Island.

2. Clarissa strolls through Washington Square in The Hours

A quintessential New York morning of errand running brings Clarissa through Washington Square. She enjoys the sight of the fruit vendor’s cart with its mounds of produce, along with an abandoned television set and single high heel on the curb. Without pause, she walks past drug dealers and “lunatics,” and a spotted dog chasing pigeons. Under the arch, she notes, an old woman in a dark dress is singing.

3. A summer afternoon in the South Bronx in Random Family

The nonfiction book opens in the Bronx neighborhood of East Tremont in the mid-'80s — on the street, car stereos and radios blast Latin music while men draped in gold chains flirt with young mothers out pushing strollers. People seem to shop, do laundry, eat, and buy drugs all in the same few blocks, in the company of their neighbors.

4. Holden marvels at the things you can see in NYC windows in The Catcher in the Rye

5. Francie gets her first glimpse of Manhattan in A Tree Grows in Brooklyn

As a young girl, Francie discovers the perks of living on the top floor of a walk-up building: no upstairs neighbors and rooftop access. As soon as the family moves to their new apartment in Williamsburg, her dad takes her up to the roof and shows her the view of Manhattan across the East River. To Francie, seeing it for the first time, it looks like “a fairy city made of silver cardboard.”

6. John Coltrane plays a new kind of jazz in a Bowery club in The Road to Woodstock

Michael Lang, who would go on to organize the legendary Woodstock music and arts festival, got some of his early inspiration from frequenting the clubs and bars of lower Manhattan in the 1960s. He recalls sitting in the smoky Five Spot club on the Bowery one night, watching John Coltrane “travel out to the edge with his music,” using his saxophone to express his inner emotions and thoughts. Pretty damn groovy.

7. Archer wanders through the city's "Bohemian" quarter in The Age Of Innocence

While visiting the socially adventurous Countess Olenska, Archer ponders the “unmapped quarter inhabited by artists, musicians, and ‘people who wrote,’” a section of New York shunned by the high society from which he comes. While walking through the unfamiliar neighborhood, he realizes that the artistic element is not what perturbs his family and the rest of the upper class, but the poverty (a New York attitude that has, in some ways, stood the test of time).

8. Esther and Doreen get asked out through a cab window in The Bell Jar

On their way to a party, the teenage friends find themselves stuck in the “theater-hour rush.” With the traffic at a stand-still, a man at a nearby bar takes the opportunity to approach the taxi window and chat with ladies. After convincing them that they’ll have more fun with him, the girls hop out of the car, forgetting to pay. After the cabby honks and shouts an angry, “Waddaya think you’re doin’?” the male stranger hands him some money and rejoins the girls. (Spoiler alert: It would've been better for both girls if they'd stayed in the cab. Ladies, take note.)

9. Immigrant women shop at the East Side pushcart market in 97 Orchard

In this nonfiction book, the author describes the bustling East Side pushcart market, a loud and messy place where immigrant women would haggle for their daily groceries. Since their tenements had no pantries or iceboxes, women would buy only enough food to make one or two meals: half of a parsnip, a handful of barley, a single egg. For the most part, uptown Manhattanites thought the whole place was gross, but some would come down to enjoy the foreign “romance” of it.

The entirety of this short book is devoted to New York City as E.B. White experienced it in the summer of 1948. Many of his ruminations still ring true, like his claim that there are “roughly three New Yorks”: New York for the born-and-raised folks, the commuter’s New York, and New York for those who were born elsewhere and came to the city “in quest of something.” White found the third one to be the most important, crediting the spirit and passion of outsiders with the city’s major achievements and productivity.

11. Sherman struggles to walk his dachshund on Park Avenue in The Bonfire of the Vanities

Using the excuse of walking his dachshund, Sherman escapes from his apartment to pay a quick visit to his mistress. Unfortunately for Sherman, the stubborn New York City dog refuses to budge from under the building's awning. Gentle leash-tugging becomes a full on tug-of-war, and eventually Sherman has to drag the pup — toenails scraping on the sidewalk — until he's out of view of the doorman and can make a private phone call.