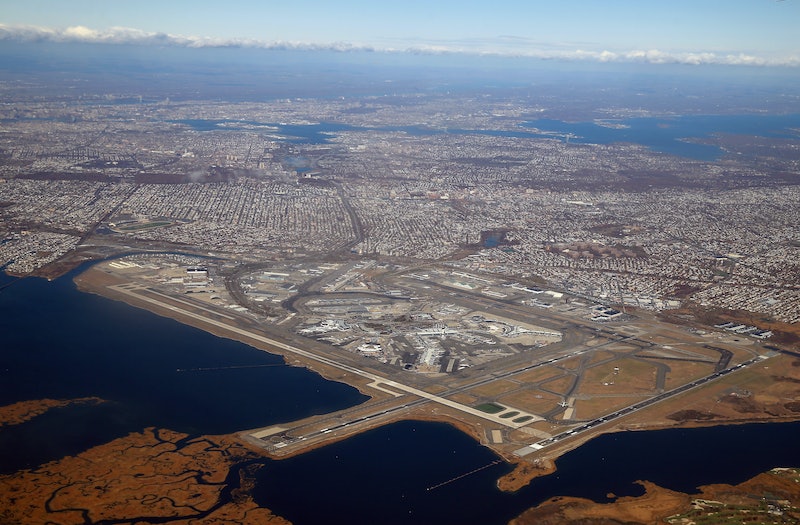 In a new low for airport security, two intrepid kayakers breached JFK Airport's security perimeter early Saturday morning completely by accident. That doesn't mean two guys who just happen to enjoy kayaking: They actually washed up with their boat at the airport. The two men were spotted near a runway well into the major airport's supposedly secured perimeter. At 1:30 a.m. Because who doesn't enjoy a nice, relaxing late-night kayak excursion by one of the nation's largest, busiest international travel centers? That's certainly how I like to wind down after a long week.

The kayakers said that they set out at 11:30 p.m. on Friday night from the Inwood neighborhood of New York City, just across the bay from JFK. Adding to the poor planning of the evening was the fact that the two men selected a three-person boat for their pleasant midnight kayak jaunt. At some point during the adventure, the kayak tipped over, sending two paddles off on an adventure of their own, never to be seen again. With one paddle left, the dynamic duo headed to the closest shoreline. Fortunately for them, they made it without physical injury. Not so fortunately, their saving grace was a pier at the end of an airport runway.

To be fair, Runway 4L is kind of hard to miss. Of JFK's waterside runways, it juts out farthest into the bay, which means it should probably be watched closely, since it's most at risk of being accidentally invaded by rogue kayakers. But Saturday's rogue kayakers were able to access it, no problem. Well, no problem for them. The fact that they were not caught by the motion detectors and security cameras that comprise JFK's $100 million Perimeter Intrusion Detection System is a bit of a problem for the facility's security team. Especially since another man was able to climb over a fence at the very same runway in 2012 after his Jet Ski ran out of gas.

One would think that two years should be more than enough time to tighten up security on a single runway. But rather than being spotted by expensive cameras (or by nighttime boat patrols, which were canceled last year to save money), the kayakers were finally found by maintenance workers, two hours after their adventure began. Saturday morning, a Port Authority police union spokesman conceded that the group now believes that the airport's high-tech security system "is a failure" and noted that the Port Authority has more than enough vessels to reinstate 24-hour marine patrols. As for the kayakers, one of them attempted to explain their adventure to the New York Post after being charged with trespassing: "We were just kayaking at night."