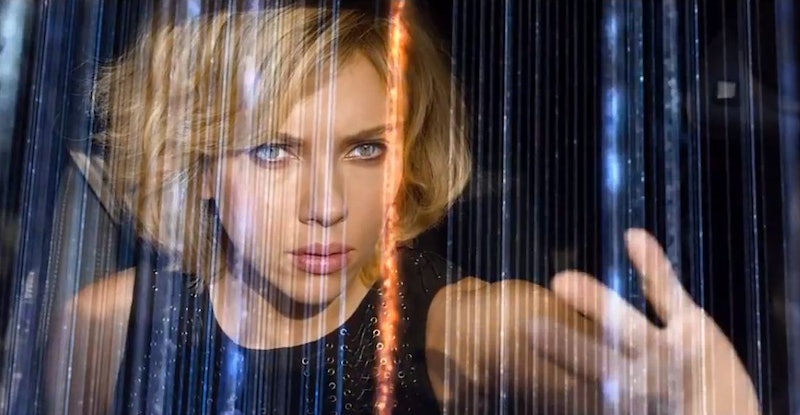 Well well well, what have we here? This weekend saw a battle between Dwayne "The Rock" Johnson's turn as legendary musclebag Hercules and Scarlett Johansson as a with a big brain and a big taste for vengeance — and it was Johansson's Lucy that won the box office. Lucy, directed by Fifth Element director Luc Besson and starring Johansson, pulled in a solid $44 million its opening weekend, proving that Johansson's got what it takes to dominate a box office action flick weekend. Imagine what she could do with the full Marvel push behind her and a solo movie. I'm just sayin'.

Johnson's Hercules, meanwhile, came in second with $29 million. This box office weekend seems to be gelling pretty well with that study that said that it was movies starring women that were bringing in more money than the male-led one. The Hunger Games: Catching Fire, Frozen, Gravity — it's completely undeniable that the money-paying public will shell out the big bucks for movies starring Hollywood's biggest ladies, and Lucy proves Johansson is one of them. Considering that some of this summer's box office troubles have been attributed to the lack of content for women, studio execs should be taking some notes right about now.

And considering the lack of Black Widow solo movie announcement at Saturday's Marvel Comic-Con presentation, one could argue that Marvel should be taking the most notes of all.