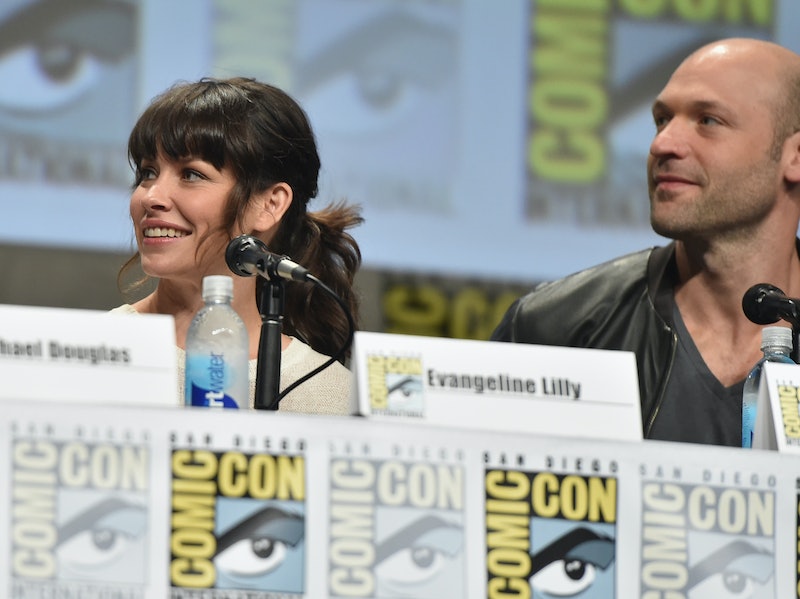 They made their names on buzzy TV shows, and now they're diving headfirst into the Marvel cinematic universe: Ant-Man cast Corey Stoll and Evangeline Lilly. The announcement was made at San Diego Comic-Con, because of course it was. Saturday's Marvel presentation was a relatively low-key event considering that many expected huge announcements concerning the casting for Doctor Strange or some sort of surprise. Instead audiences were treated to the rolling out of Stoll and Lilly, which some will find comforting after Patrick Wilson jumped off the Ant-Man ship that same weekend.

As for who they'll be playing, Stoll will be playing the film's Big Bad, a man named Darren Cross who goes by Yellowjacket for his supervillain persona. Of the casting, Marvel head Kevin Feige said:

As a major part of the Ant-Man ensemble, we all wanted an actor who could be both cunning and sympathetic, and help create a character as dynamic as Marvel’s best antagonists.

It makes sense, then, that they picked Stoll, who more than exhibited his abilities to delve into the dynamic and the sympathetic in House Of Cards — all he's gotta do now is apply some of that skillset to villainy.

As for Lilly, she will play Hope Van Dyne, daughter to Hank Pym, played by Michael Douglas. Hope will — in traditional and frankly boring comic book movie tradition — also be the love interest to the protagonist superhero (played by Paul Rudd, so there's that). But Lilly displayed her ability to kick ass throughout Lost and in the more recent Hobbit movies, so hopefully they'll let her extend that skillset of hers to this movie as well.