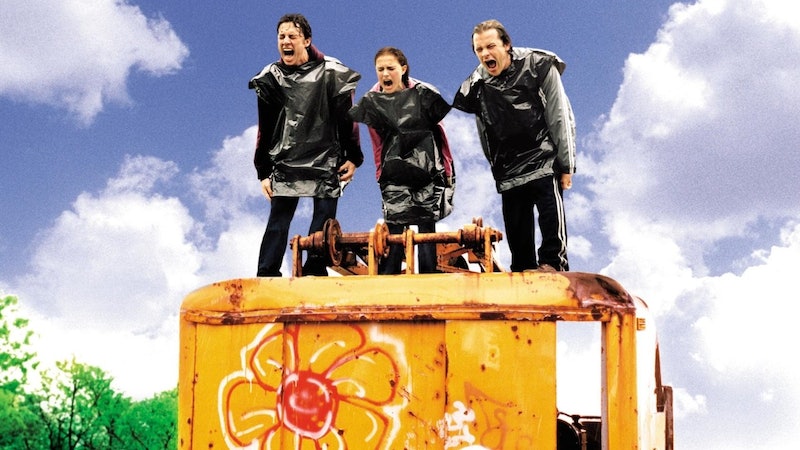 When recalling the movie Garden State, there are likely a few key images that flash first to mind: the garbage-bags-rain-scream, Zach Braff's contemplative face (which is centered in a close-up for about 30 percent of the film), the wistfully low-key soundtrack, and a handful of fortune cookie profundities about pain and life and plastic dishwasher latches — all of it just so. achingly. indie, to the point that the film is just shy of cringe-inducing to revisit. Really, though: From "noiseless velcro" to Desert Storm trading cards to the sheer number of times characters who are not Braff end their sentences "'n' shit," clearly proving themselves plebes unconcerned with uniqueness or infinite abysses, this movie's insistence on bludgeoning you with its own mopey artistry is pretty freakin' insufferable.

Of course, there's something to be said for the fact that Garden State is just now celebrating its 10-year anniversary; it's entirely possible that it's aged poorly because it was so influential, rendered retroactively lame by years of angsty celebration and tepid rehash. For example, for better or worse, we now live in a post-Manic Pixie Dream Girl society — that is, a pop culture climate in which that specific brand of capital-Q Quirky dude-cheerer-upper is a commonly understood trope — such that every time Natalie Portman even appears on our 2014 screens, we're all pre-primed to sigh. But then again, she does also figure skate to plinky music in an alligator costume, so this one could go either way.

Point being, if you still yearn to yell away your troubles in a downpour, or if that Shins song really did change your life, then more power to you. But if you, like me, feel the same shame hangover watching Garden State that you would reading your middle school journal, then let's commiserate about it (while collecting our tears in jars, of course). Here goes:

What it seemed like at the time: Just look at this poor protagonist, numb even to imminent death, alive but hardly living. I am he as you are he as you are me and we are all fascinated by that air conditioner nipple contraption.

What it seems like now: A Fight Club rehash.

What it seemed like at the time: This explains it — our modern obsession with instant gratification, unearned endorphins, thinking that pills solve all our problems. Housewives and Prozac, amirite?

What it seems like now: 1) No one could take that much medication at once without becoming instantly dead; he must have a bottle-hoarding problem. 2) When he shuts the door, his face is off center, and it makes me want to break things (possibly his face).

Walking Past the Automatic Sinks

What it seemed like at the time: Technology may acknowledge our presence because we've trained it to, but it's all ephemeral, man — it's just so fleeting...

What it seems like now: The fact that every one of the sinks in an airport bathroom worked is a fucking miracle.

What it seemed like at the time: We're all just slowly fading into the background of our own lives, victims of suburban comfort.

What it seems like now: "I went to my mom's funeral and all I got was this lousy button-down shirt."

(Also, wouldn't a shirt made out of wallpaper be really uncomfortable? Or did she buy fabric to match the wallpaper? But to what end? And what is this funeral-goer up to that she has time to drop everything and make Zach Braff, whom she hasn't seen in 9 years, a shirt? How would she know what size he was? This visual gag is woefully underexplained, and I demand satisfaction.)

The Knight in the Kitchen

What it seemed like at the time: A classical symbol corrputed and cheapened in the name of fast food — this, my friends, is poignance itself.

What it seems like now: Read, just, any George Saunders story, ever.

Being Unique, Even for a Second

What it seemed like at the time: Bleep blorp fuhnuhnuhnuhnuh WAAAAH! Nailed it.

What it seems like now: Is it possible that no one has ever rolled their eyes this hard? Did I do it? Am I unique?

"Maybe that's all a family really is — a group of people that all miss the same imaginary place."

What it seemed like at the time: Just because it's a house doesn't mean it's a home (written in black pen, words intermittently bolded, next to a drawing of a winged girl in a cage made of Slim Fast wrappers). God, Mom, you don't even get it!

A Visit to The Quarry

What it seemed like at the time: Corporate America is ruining nature; real, unique beauty is constantly being bulldozed in favor of chain stores and plastic roses; this movie is beautiful and unique, not like that homogenized sell-out crap; quick, where is my Shins CD???

What it seems like now: What are you doing going into this craggy death pit with two strange men, Natalie Portman?! Peter Sarsgaard has 100 percent murder vibes, and Braff would be too contemplative and center-framed to do anything about it.

What it seemed like at the time: Wait omg life is totally the infinite abyss but also maybe he just meant "you too" like how people always say "you too" by accident even when it doesn't apply because no one really listens to each other in our alienated modern age and everything is commodified and everyone is numb and— *faints, mid-fap*

What it seems like now: I will bet you a million dollars that Zach Braff thought up this one exchange, then constructed the entire movie around it.

Screaming in the Rain

What it seemed like at the time: Move over, Aristotle — this is how you do catharsis right.

What it seems like now: OK, but how fucking awkward to start making out while poor Sarsgaard is just standing there, forcibly staring off into the distance. Was it really absolutely necessary to commemorate that moment by rubbing tongues?

Collecting his tears in a jar

What it seems like now: Can someone write a spin-off of this movie in which Portman turns out to be a great and terrible she-demon sustained only by male tears?

The Resolution with His Father / the "Point of the movie" speech

What it seemed like at the time: Preach, brother — 26-year-olds are under no obligation to have even a modicum of their shit together, also fuck psychiatric medicine and commodification and if I do nothing else but scream in the rain for the rest of my life, you should be thanking me on your goddamn hands and knees for showing you that there's life to be lived outside your numb, corporate sameness.

What it seems like now: Who you are is the worst.

What it seemed like at the time: What will they do now? What do any of us do now that our preconceived societal values have been laid waste by this film? Let go, there's beauty in the breakdownnn...

What it seems like now: I mean, they've known each other for four days — probably break up soonish? Or not. Whatever. Anyone else feel like watching Scrubs?