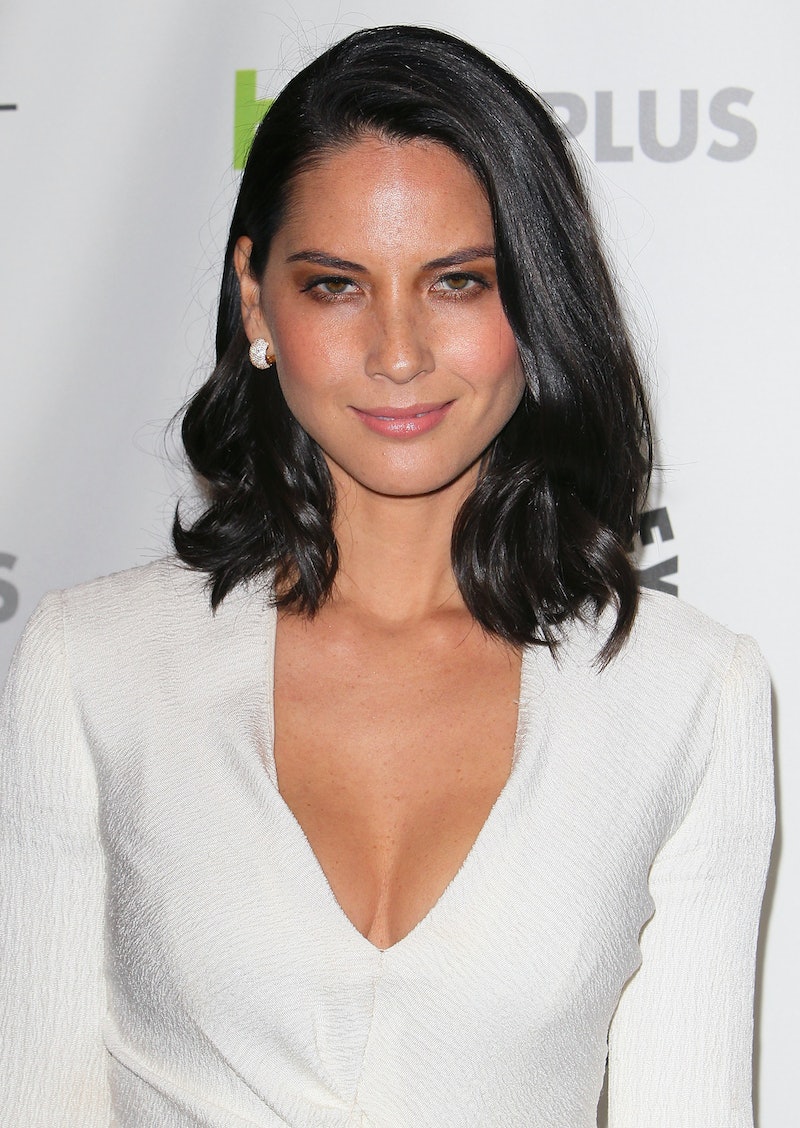 If the Internet were a person, one of its favorite extracurricular activities would be shitting on Olivia Munn. Munn, the actress most well-known for her stints on Attack of the Show!, The Daily Show with Jon Stewart, and now The Newsroom has been a punching bag for years thanks to her intelligence, good looks, and occasionally (god-forbid!) human displays of emotion in tricky situations. And I think it's really fucking lame.

Munn's most recent rehash of her career, opinions, and the media's exact-o knife obsession with her was the cover story for June's Flare Magazine. In it, Munn cuts quickly to the heart of the hypocrisy: “If you don’t like that I’m being sexual, or letting myself be objectified, then you better not own a push-up bra and wear it outside of the house." Because, as Munn sharply observed about her character Sloan Sabbith on The Newsroom, she's hip to the implications that come with just existing as a woman with her body/mind combination. "I don't want Sloan to flaunt her sexuality, but I want her to embrace it and to feel comfortable with herself. And I want the audience to judge her when they see her, but then as soon as she starts talking and you hear those Aaron Sorkin lines come out — and if I play it strong, and thoughtful — maybe they’ll judge themselves for judging her."

Listen, I know homegirl isn't perfect. She's a human, which naturally debunks that myth off the bat. Her earlier work may be questionable as far as furthering the feminist cause is concerned. And I, too, cringed when I read her response to online dissenters from an interview with HollywoodLife in 2010 when she went on the attack, explaining that women who dislike her need "to fucking turn her fucking computer off, take the sandwich out of her mouth and go for a goddamn fucking walk... Just walk it off, bitch." I mean, yes, not good.

But while it's unfortunate that public outburst and early career choices were less than flattering, they're also not completely unforgivable either. She didn't shoot a child or burn a house filled with puppies. She made a catty comment and took a job that objectified her body more than her mind (on Attack of the Show!, where, in one sketch, she wore a French maid outfit while jumping into a pie) — both subjects that not only follow her everywhere she goes, but are clearly hot-button issues to her. Because of course!

Think about how often Munn's looks and sexuality are brought up when discussing her (which is to say, constantly). Don't you think that'd be annoying to hear/see/read/listen to day in and day out? I get that it's the industry, but the girl is also a human being and sometimes, yes, even things that are par for the course can get under your skin if they're thrown at you enough. Munn is constantly railed against online and in the press for her looks, her outspokenness, and her work in nerd culture that some find disingenuous. (To which I say: hey, a job's a job, and — gasp! — maybe she really does enjoy those things.)

Is her character on The Newsroom perfect? Har har har, to suggest that's even a possibility is hilarious. Sloan Sabbith is not the pinnacle of a modern, empowered female character (though she's certainly not the worst) — but that's an Aaron Sorkin problem and a story for another day. The problem here lies in the fact that we all seem to agree with what Munn's saying (sexism in Hollywood is real!), but most hate the fact that she's the one saying it. Because apparently not having the perfectly scripted ascent to empowered female in Hollywood is a dealbreaker. Which totally makes sense because every other woman in Hollywood has had the easiest, most un-sacrificial rise to respect and admiration. Oh wait!

So let's just stop right now with the pressure us women put on visible, noteworthy women to be representative of ALL OF THE WOMEN, eh? That only furthers the horribly insidious misogyny that is so ingratiated into our culture we sometimes forget that's what's actually going on in these criticisms. We're all unique fucking snowflakes, okay? Just as there are 3,857,695,846 types of dudes in the world, there are just as many (if not more) types of women, and no one said you had to like or agree with them all.

Maybe I'm just as naïvely optimistic, as many believe Munn to be, but that's certainly not a bad thing. Her experience in the industry (and in life) is just different than many other women's. Might that be because she's totally hot and working in an industry that's dominated by dude decision makers? Possibly/probably, but what else was she supposed to do? She was born the way she was, looks the way she does, and did what she had to do to get where she is today. Now that her platform is bigger, she has more clout and control over her career and can be a bit more discerning and selective with more dynamic, interesting female roles and less pie-diving. (And the latter is something the actress has noted she now regrets. Weird how she hasn't made every perfect and wholly appeasing career choice from minute one, eh?!) We all make sacrifices to get where we are in our careers sometimes. We all say and do things we shouldn't have or later come to regret. I just can't see how or why it's any different for Munn, and why she should be criticized for it so harshly.

Fuck the bullshit, Munn. If nothing else, this random Internet writer lady is in your corner.

More like this
Sandra Bullock, Girlboss Extraordinaire
By Matt Harkins & Viviana Olen
Spice Girls’ Net Worth: The Richest Member Is Wealthier Than The Rest Combined
By Hugh McIntyre
Harry Styles Opened Up About Olivia Wilde With A Rare Comment About "Trust"
By Sophie McEvoy
Justin Timberlake’s ‘Candy’ Character Really Investigated Betty Gore’s Killing
By Brad Witter
Get Even More From Bustle — Sign Up For The Newsletter