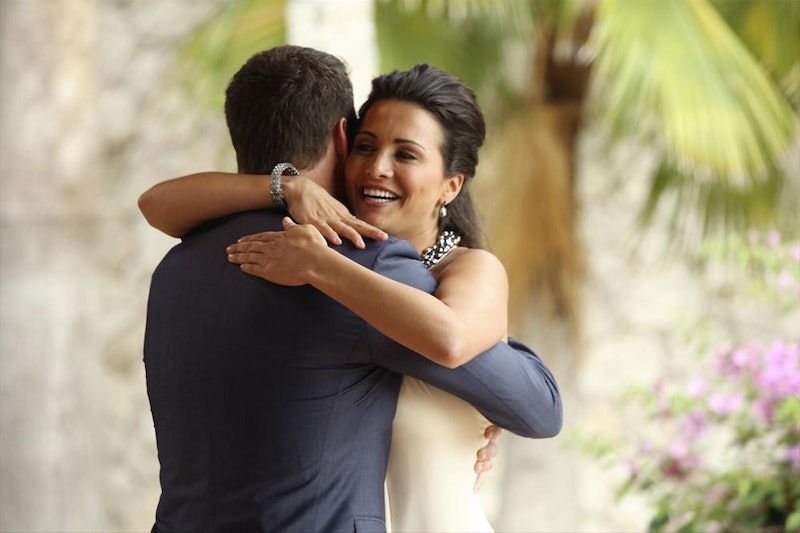 Yes, you heard all of that correctly. On After the Final Rose, Nick Viall talked about having sex with Andi in the Fantasy Suite. "If you weren't in love with me, I don't know why you made love with me," he mumbled into his skinny tie moments after crying on National Television. Andi immediately declared this announcement below the belt, but was Nick slut shaming? Or was he expressing his heartbreak?

Well, there's no doubt that the dude was emotionally destroyed by losing Andi. He was convinced that she was going to choose him and after he aired their private life (even if we all know what goes down in the fantasy suite) we know that confidence apparently came from them having sex in the Dominican Republic. Yes, Nick said he told her how precious that act was to him and he's got a point that maybe they should have talked a bit more before doing that if she knew she wasn't as in love with him, but dude, are you seriously airing that in front of all of (er, part of) America?

It was clearly the move of a guy who's been dying to speak to the woman who broke his heart (he's failed twice before), but it's also clearly not a good move. Especially, because it opened the floodgates to all sorts of opinions on Twitter.

There were the straight-up slut shamers:

I mean, I guess I'm glad you're not slut-shaming.

There were those trying to find reason:

Those who think having emotions makes a guy creepy:

And the one who makes a really valid point:

Yes, Nick shouldn't have done this on TV. But yes, he tried to do it behind closed doors and she refused. So while he's in the wrong for airing it on National TV, he certainly didn't bring it up to slut shame her. The dude was scarred emotionally. He wasn't mad that she slept with two men, he was upset that he told her their interaction meant something, she accepted that, and that the interaction turned out not to mean the same thing to her.

He could have handled it better, but when ABC is making you cry on national television about your unresolved heartbreak while they play "Bleachable Moments" in which your cast-mates bash you relentlessly, very few people would make sound decisions. If I was a betting woman, I'd bet every penny that Nick not only regrets saying that on TV, but probably feels a whole lot worse about now.

More like this
'Bachelorette' Vet Clare Crawley Unveiled 2 Special Wedding Day Accessories
By Stephanie Topacio Long
Kaitlyn Bristowe Said Chris Harrison Ignored Her After Her 'Bachelorette' Hosting Gig
By Grace Wehniainen
This 'Bachelor' Contestant Got Back With Her Bachelor Nation Boyfriend After Going Home
By Grace Wehniainen
'Bachelor' Fans Think Rachel & Clayton Are Dating After This TikTok
By Grace Wehniainen
Get Even More From Bustle — Sign Up For The Newsletter
From hair trends to relationship advice, our daily newsletter has everything you need to sound like a person who’s on TikTok, even if you aren’t.