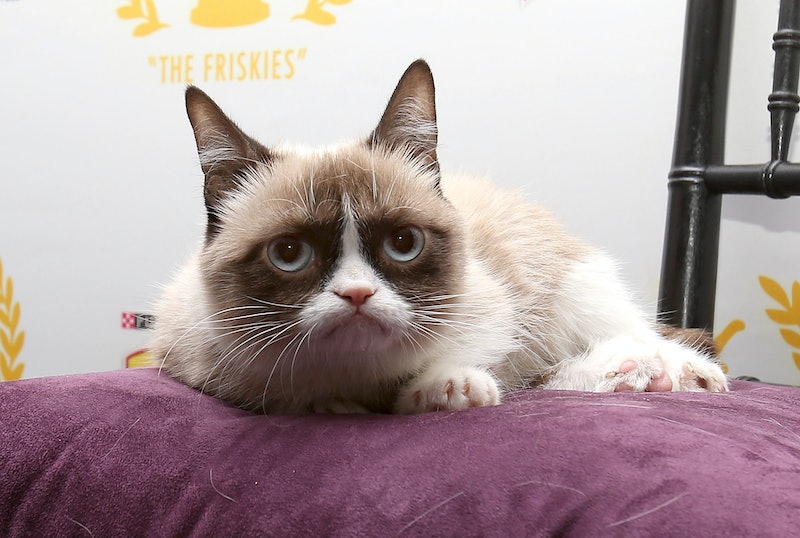 Usually the proposal is the highlight of the Bachelorette finale, but tonight it turns out that Josh Murray getting down on one knee wasn't the most important part of the night — at least where the Internet is concerned. Josh ended up being upstaged by none other than Grumpy Cat. That's right, instead of revealing the next Bachelor (super lame, Chris Harrison) the After the Final Rose special ended with a chat about one of Andi's favorite facial expressions. Her practically perfect frown has gotten a lot of attention on social media (with a Twitter account and everything) so to prove that Andi can laugh at herself, ABC brought the feline frown expert to join the happy couple.

Grumpy Cat is beyond adorable and I probably won't ever get tired of seeing her, so nice move, ABC. You totally distracted me from all of Nick's sadness and Josh's lengthy proposal. Andi willingly took Grumpy Cat into her arms and made her own signature frown while Grumpy Cat just looked generally unimpressed by everything happening around her. Then Josh pulled his own grumpy face and together they made an adorable grumpy family.

"It's their first kid," Chris Harrison gleefully announced, likely just thrilled that love was admitted on this show unlike on Juan Pablo's season.

This Bachelorette series had its flaws and boring moments, but it was almost all worth it just for this moment. Gotta love that Grumpy Cat.