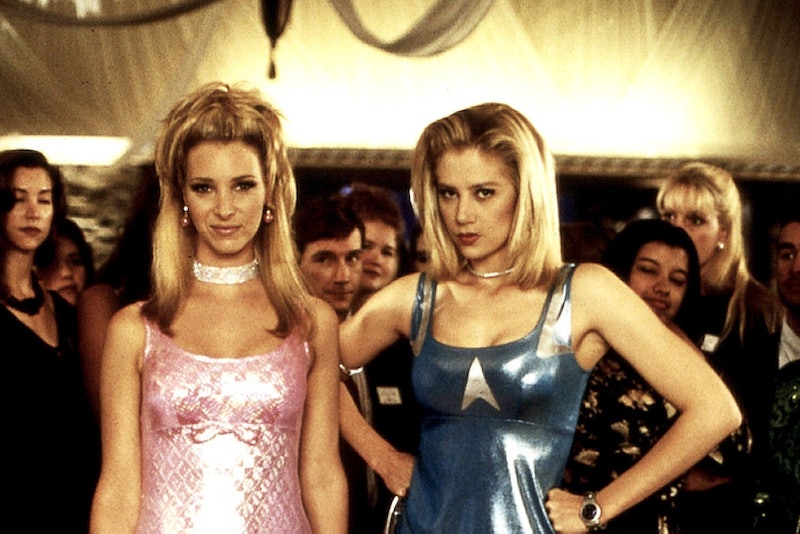 Sometimes, Disney makes great decisions: making The Avengers, greenlighting Frozen, allowing the feminist gem that is Romy and Michele's High School Reunion to exist. And sometimes, it makes awful ones: financing John Carter, continuing those Pirates movies, and, worst of all, refusing to make a Romy and Michele sequel, despite how clearly good a choice that would be. According to star Mira Sorvino, the movie's studio has said no to a follow-up film, despite Romy's cast and crew — and audiences — more than willing to make it happen.

According to Sorvino, "everybody wants" a sequel, but Buena Vista, the subsidiary of Disney that produced the film, hasn't gotten on board.

"Disney, if you're listening—everybody wants it!" Sorvino told E! on Monday. "Me and Lisa [Kudrow] and Robin [Schiff, the film's writer] would love to do a sequel. We have asked Disney before. It's Disney that has to decide to say yes."

She added, "I don't think they realize what a cult phenomenon it has become."

As someone who only had her first Romy and Michele-watching experience recently (I know, I know) and can attest to its greatness, I am fully in support of a sequel getting made, if Disney ever comes to their senses and says yes. The movie is a cult classic for a reason; funny, smart, and awesomely feminist, it resonates with its audiences whether they saw it in 1997 or 2014. Making a sequel would be a fantastic move, and while Disney may be hesitant now, here's hoping they come around before long.

Besides, I have plenty of ideas for material I'd be more than happy to share. Five things I'd want to see from a Romy and Michele sequel:

An Update on That Store

Although many didn't realize it at the time, Justin Theroux had a small role in Romy and Michele as the mysterious cowboy Heather (Janeane Garofalo) reunited with at the movie's end. At the time, he was a film newcomer, so the lack of screentime made sense. Now, though, he is Mr. Jennifer Aniston-to-be and a TV star in his own right, so obviously, he'd need more to do in a Romy sequel than he was given in the original film.

Equally important: a rehash of that amazing "Time After Time" dance, or some similar routine that also becomes a cult favorite. This is a must.

No Mention of That Prequel

What prequel, you ask? Oh, just the ABC Family TV film starring Katherine Heigl and Alexandra Breckenridge that aired in 2005. Despite being written and directed by the movie's screenwriter, Romy and Michele: In the Beginning was pretty terrible — and no, even a "special appearance!" by Paula Abdul couldn't save it from its fate.

The only thing more amusing than 30-year-olds totally unconvincingly pretending to be high schoolers for a flashback? 50-year-olds doing the same thing. Here's hoping that if Romy and Michele 2 ever comes out, the filmmakers don't put in any more effort in the actors' "teenage" makeup than they did the first time, because watching people that are clearly adults attempting to pass off as teens (The To-Do List, 21 Jump Street, every episode of Glee) is never not entertaining.