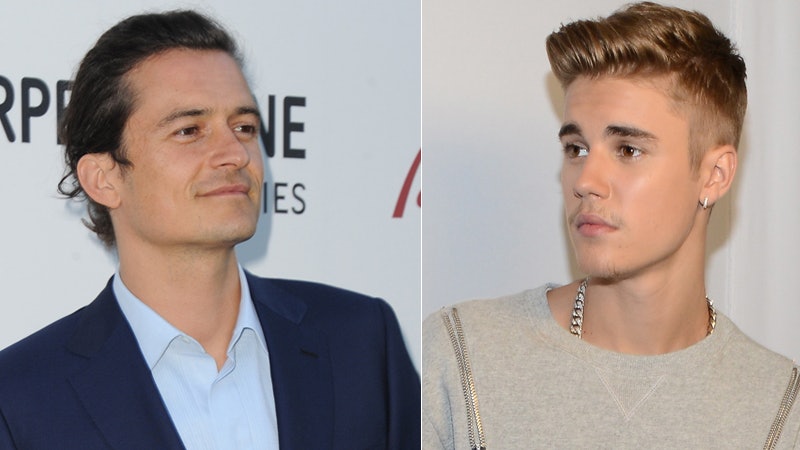 In a historic event that I am now solely referring to as "Bloombergate", it appears that Orlando Bloom and Justin Bieber got into a fight in the early hours of Wednesday morning at a restaurant in Ibiza, Spain. Sources seem conflicted as to whether Justin Bieber started the fight by making inappropriate comments about Bloom's ex-wife Miranda Kerr or Bloom started the fight by ignoring Justin Bieber when he passed by, but everyone on the Internet seems to agree that trying to punch Justin Bieber makes Orlando Bloom our king. More and more details have come out about the altercation to give us an accurate picture of what went down, but, honestly, does it really matter? For the Internet, it seems to be good enough that someone finally tried to punch Justin Bieber.

In fact, the Internet is more upset that Bloom missed than they are that two stars nearly came to blows in a restaurant in the middle of the night. However for those that do care about getting the whole story (and those with short attention spans), I've read as many reports about Bloombergate as I could find and I've managed to condense it all into one, simple visual summary for everyone to enjoy. After all, what are emojis for if not to save us time using words?

Confused? Well, all right, if the visual helper isn't enough of a summary for you then here's what E! Online is reporting actually went down.

There was a party going on at Cipriani restaurant in Spain which featured the happy, smiling faces of numerous musicians and actors. Justin Bieber rolled in with his posse and tried to shake Orlando Bloom's hand or get his attention in some way, but Orlando Bloom was not having it. He shut that interaction down and Justin Bieber fired back with an incendiary comment about Orlando Bloom's ex-wife Miranda Kerr. (To be specific there, reports are stating that it was something along the lines of "She was good.")

This set Bloom off and he threw a punch at Bieber, much to the elation of everyone else at the party. Apparently, people were cheering him on. The two began yelling at one another before Justin Bieber finally left. When this news story hit the Internet, most people found it absolutely hilarious and promptly crowned Orlando Bloom king of the world.

There are some conflicting sources who claim that Justin Bieber did absolutely nothing wrong before Orlando Bloom randomly decided to throw a punch at him, but it seems pretty likely that the Biebs just didn't appreciate being snubbed by another celebrity like that. After all, Bieber isn't exactly known for his maturity. After the fight, he took the time to go online and post a picture to Instagram of Miranda Kerr in a swimsuit with a crown as the only caption, although he deleted it not long after that. Stay classy, Bieber. And you're welcome, Internet.